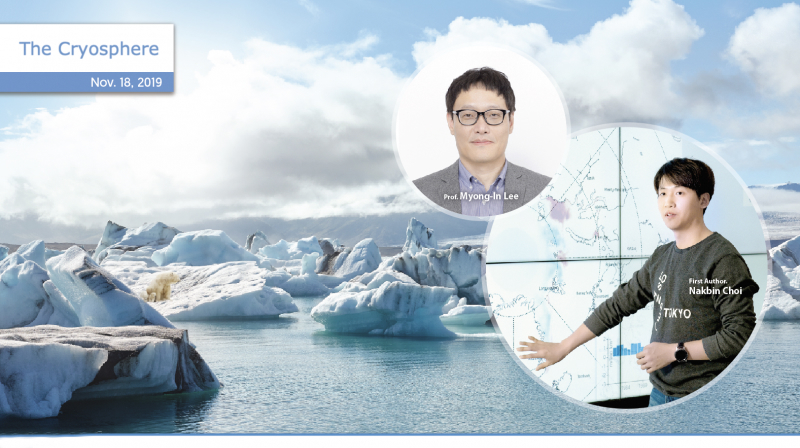 Professor Myoung-In Lee (School of Urban and Environmental Engineering, UNIST), in collaboration with NASA's Climate and Radiation Laboratory in the U.S., have successfully analyzed the main patterns of atmospheric circulation affecting the Arctic sea ice and found that the impact of climate changes on the Arctic sea ice has become stronger.

Their findings have been published in The Cryosphere on November 18, 2019.

Arctic sea ice, also known as frozen seawater that floats above the Artic Ocean is an important indicator of changes in global climate. The decline of Arctic sea ice during the sunnier summer months leads to increased solar radiation absorption, warms the Earth’s surface, thus causing more snow and ice to melt. This phenomenon will be investigated scientifically to improve predictions of Arctic sea ice extent, thus will  support preparedness and response to heat waves and spring colds.

Arctic Dipole (AD) is a phenomenon in which the high and low pressure cycles alternate between the east and west sides of the Arctic, based on the date change line. When the Arctic Dipole (AD) is ‘high pressure circulation in the west and low pressure circulation in the east (negative phase)’, the Arctic Transverse Current, which flows through the North Pole, becomes stronger. Arctic sea ice melts well in the Transpolar Drift Stream (TDS) and flows into the relatively warm Atlantic, reducing its area.

In the study, the team compared the decadal changes of the modes between the early (1982–1997) and the recent (1998–2017) periods and their influences on the Arctic sea ice extent (SIE). As a result, the spatial behavior of the Arctic Dipole (AD) has recently been changed, and the mechanism by which Arctic Dipole (AD) -induced fluctuations in Arctic sea ice caused by Transpolar Drift Stream (TDS) is evident. As the center of the Artic Dipole (AD) has recently moved east, surface winds have flowed into the Atlantic, making the Transpolar Drift Stream (TDS) stronger.

The findings of this research have been published in The Cryosphere on November 18, 2019.

Journal Reference
Nakbin Choi, Kyu-Myong Kim, Young-Kwon Lim, and Myong-In Lee, “Decadal changes in the leading patterns of sea level pressure in the Arctic and their impacts on the sea ice variability in boreal summer,” The Cryosphere, (2019).