Home All News Research Development of an Effective, Safe, and Long-term Immunosuppressant 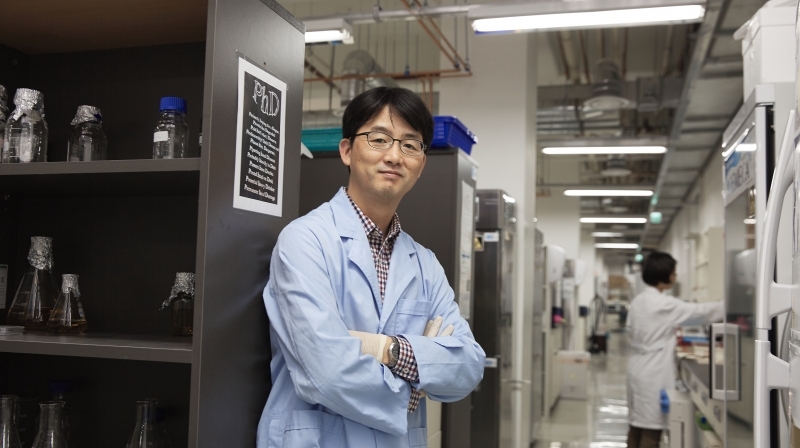 Prof. Park (School of Life Sciences) posing in his lab at UNIST

Development of an Effective, Safe, and Long-term Immunosuppressant

"This discovery will provide a fast and inexpensive method for identifying small molecules that bind to specific proteins.”

The immune system is a balance network of cells and organs that work together to defend your body against attacks by diseases. However, it can also be a contributing factor that causes people to develop an autoimmune condition where your body’s immune system attacks healty body tissues by mistake.

Current medications, involving steroids or other immunosuppressant drugs are effective for controlling severe manifestations of allergic, autoimmune, and transplant-related diseases in the short term. However, its long term safety profile continues to be studied due to their long list of side effects.

For instance, the use of calcineurin inhibitors (CNIs) plays a significant role in the success of organ transplantation, but they increase the risk of severe infections and cancer when taken for long periods of time. There is, therefore, an urgent need to develop safe and effective therapeutic agent.

A team of researchers, led by Prof. Chan Young Park (School of Life Sciences) has developed a new inhibitor of Orai1 channels, AnCoA4 that could be potentially developed into a safe, effective, and long-term therapeutic alternative.

In this study, Prof. Park’s research team identified that AncoA4 is a more effective in vitro and in vivo than cyclosporine, the potent immunosuppressant widely used in organ transplantation and in the treatment of several autoimmune disorders, , such as type 1 diabetes and psoriasis.

Prof. Park stated “This discovery will provide a fast and inexpensive method for identifying small molecules that bind to specific proteins.” He adds “Although a follow-up investigation for chronic toxicity testing has to be done, the fact that we discovered AnCoA4 that could potentially developed into an immunosuppressant with long-term efficacy and safety is of great significance.”

The result of this research appeared in the October 2014 issue of Chemistry & Biology at Cell Press, the world’s leading publisher in the biological sciences.