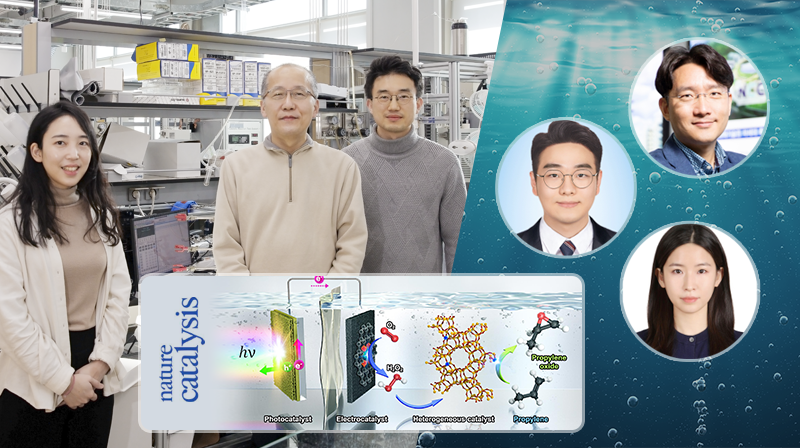 The findings of this research have been featured as the cover of Nature Catalysis ahead of its publication.

A research team, affiliated with UNIST has announced that they succeeded in developing a new catalyst system, capable of synthesizing raw materials for automobile interior materials or cosmetics using sunlight and oxygen.

This breakthrough has been led by Professor Ja Hun Kwak and Professor Ji-Wook Jang in the School of Energy and Chemical Engineering at UNIST, jointly with Professor Sang Hoon Joo in the Department of Chemistry at UNIST. This study has been selected as the cover page of Nature Catalyst, the most prestigious journal for catalyst research, and is set to be officially published.

In the study, the research team developed ‘three catalytic system,’ which integrated three types of catalysts—a photocatalyst for photovoltage generation, an electrocatalyst for selective O2 reduction to H2O2 and a heterogeneous catalyst for propylene epoxidation with in situ-generated H2O2 (See Figure 1). This is a system designed to oxidize propylene by continuously reacting three types of catalysts. Previously, the chemical process for oxidizing propylene had a problem of discharging harmful substances, and this system can make propylene oxide with only solar energy and oxygen without emitting harmful substances.

Propylene oxide (PO) is a basic raw material for automobile interior materials, cosmetics, and medicine, and is a petrochemical raw material whose demand is steadily increasing. Propylene is obtained from crude oil delivery and then oxidized and synthesized, and it has been produced using chlorine, a harmful substance because it does not react as desired with oxygen, the cheapest and eco-friendly oxidant. Recently, as environmental regulations have been tightened, a method of using hydrogen peroxide instead of chlorine as an oxidizing agent has been commercialized, but there is a problem that the hydrogen peroxide production process itself is still not eco-friendly.

For the development of this system, a technique for precisely controlling the reaction of three types of catalysts was used. The photocatalyst in the system receives sunlight in the water to produce electricity (electrons), and the electrochemical catalyst uses this electricity to reduce oxygen to make hydrogen peroxide. Finally, when hydrogen peroxide reacts with propylene with the help of a non-uniform catalyst, propylene oxide is synthesized.

Their findings revealed that the newly-developed system was able to produce PO with an efficiency of 94%. The research team anticipates that this photo-electro-heterogeneous catalytic system provides a more sustainable way of producing PO with O2 beyond the currently available methods of PO production and should broaden the applicability of the photo-electrochemical system in the chemical industry.

This study has also been co-authored by Myohwa Ko, Dr. Yongseon Kim, and Dr. Jinwoo Woo in the School of Energy and Chemical Engineering at UNIST. It has been also supported by the Ministry of Science and ICT and the Korea Research Foundation, the Future Material Discovery Project, the Leading Research Center Project (SRC), and POSCO Science Fellowship Projects.