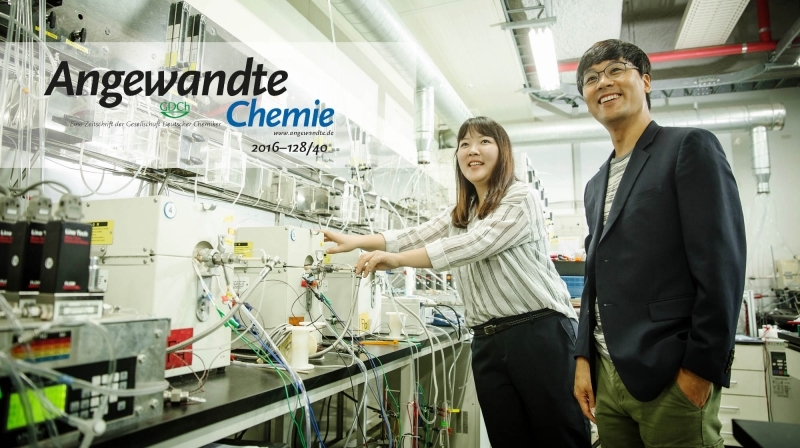 From left are Areum Jun and Prof. Guntae Kim (School of Energy and Chemical Engineering).

A new research, affiliated with UNIST has presented a new type of fuel cell, which can both store electricity in the form of fuels, like hydrogen and regenerate electricity using stored fuels, in a single system.

This research has been jointly conducted by Prof. Guntae Kim (School of Energy and Chemical Engineering, UNIST) in collaboration with Prof. Jeeyoung Shin (Department of Mechanical Engineering, Dong-Eui University), and two other researchers from UNIST.

Theoritically, SOFCs can operate in both fuel cell and electrolysis operating modes, but they haven’t been very stable. However, the new SOECs with layered perovskite not only provide the highest efficiency of electrolytic hydrogen production, but also operate reliably in fuel cell mode. This is due to the the successful application of the layered perovskite PBM and PBSCF50 as fuel and air electrodes.

Prof. Kim states, “This SOEC is capable of producing 0.9 liters of hydrogen per hour, using a battery measuring 1 X 1 cm and that is one and a half times more than previous studies.” He adds, “Moreover, the SOEC still showed excellent electrochemical performance and stability without any coarsening and delamination of electrodes even after 600 hours of use.”

Approximately 90% of the hydrogen produced today comes from hydrocarbon, and therefore it has been impossible to produce hydrogen without generating any carbon dioxide in the process. The new method, however, allows larger-than-ever quantities of hydrogen to be produced without generating any harmful emissions. In this context, SOECs with layered perovskites appear as a promising CO2 free hydrogen production method.

SOECs and SOFCs, which are referred to as solid oxide cells (SOCs), can operate reversibly as shown in figure above.

Areum Jun (Combined M.S./Ph.D. student of Electrical & Computer Engineering), first author of the research notes, “One of the great things about SOECs is that it allows hydrogen to be produced CO2-free”. She adds, “They also operate at relatively high temperatures (700-1000 °C), which makes the efficiency very high.”

Prof. Kim notes that “Hydrogen produced by SOECs can be used for various applications, including hydrogen fuel cell vehicles, power plants, and other hydrogen infrastructure.” He adds, “If commercially viable, the new cell could contribute greatly to climate action plans to the Paris Agreement on Climate Change, which will dramatically slow the pace of global greenhouse gas emissions, and thereby advancing hydrogen economy age.”

The research, described in a recent study published in the prestigious European journal, Angewandte Chemie International Edition has been also selected as a ‘Hot Paper’ by the Editors for its importance in a rapidly evolving field of highcurrent interest.

It has been supported by the Mid-career Researcher Program through the National Research Foundation of Korea, funded by the Korean Ministry of Science, ICT and Future Engineering (MSIP).