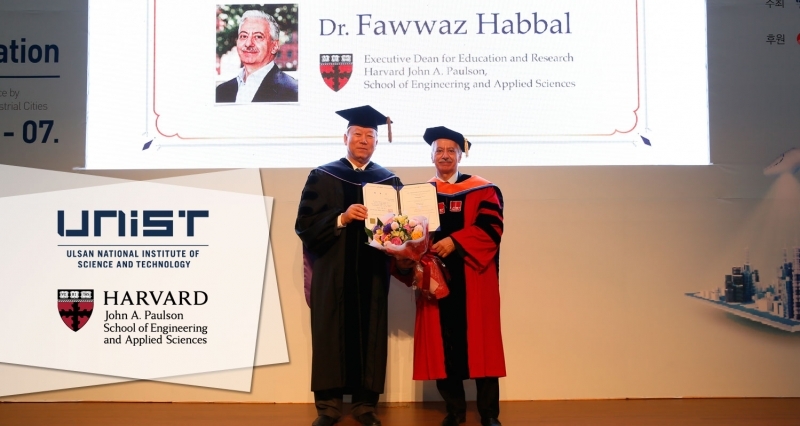 At the conferment ceremony, held on November 6, UNIST awarded an honorary doctorate degree to Executive Dean Fawwaz Habbal from Harvard SEAS. From left are President Mooyoung Jung of UNIST and Dr. Habbal.

The conferment ceremony was held in the Kyundong Hall of Main Admin. Bldg. at UNIST on November 6, 2018.

A special lecture by Dr. Fawwaz Habbal will be also held at UNIST on November 7, 2018.

UNIST has announced that it has conferred an honorary doctorate degree to Dr. Fawwaz Habbal, Executive Dean for Education and Research at the Harvard John A. Paulson School of Engineering and Applied Sciences (SEAS). This was the first honorary degrees to be awarded at a ceremony in UNIST’s history.

This honorary doctorate degree is the highest accolade conferred by UNIST, recognizing individuals for exemplary contributions in the field of education and culture, not limiting to UNIST graduates. Dr. Habbal has been given this honor in recognition of his outstanding research achievements and leadership through industry and academia. The conferment ceremony was held in Kyungdong Hall of the Main Administration Building at UNIST on November 6, 2018.

In celebration of the conferment of the honorary doctorate degree, Dr. Habbal also delievered a special lecture, entitled “Education and the Future of Work” to UNIST faculty members and students on November 7, 2018. 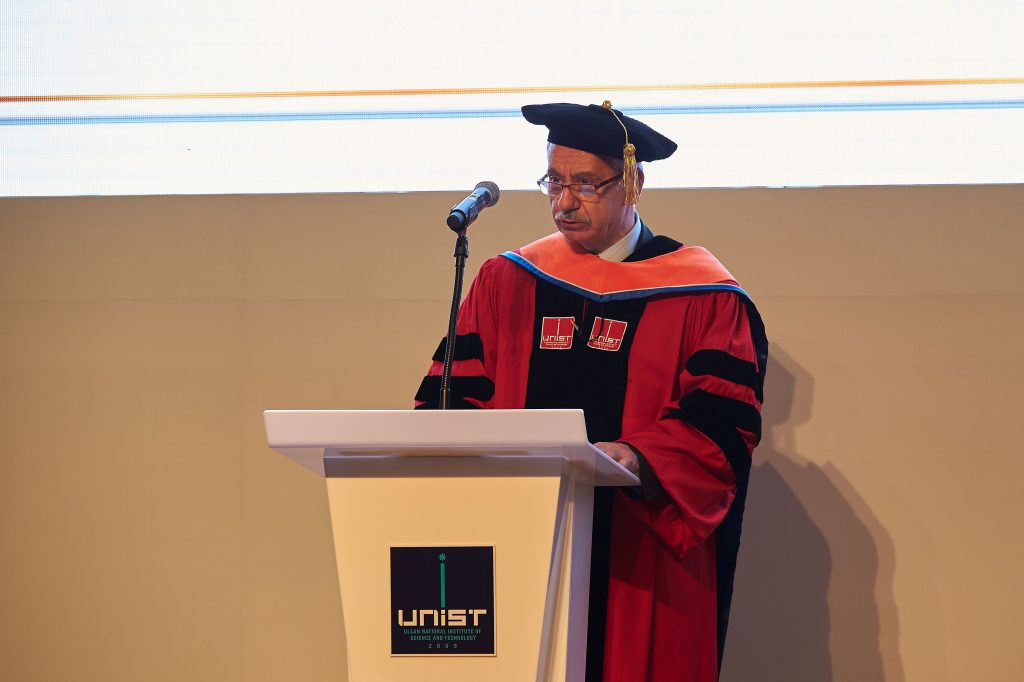 Besides, the prior relationship with Harvard SEAS also served a key role in this conferment. Two organizations have been running an international summer research program, namely UNIST-Harvard SEAS Summer Exchange Program since 2017.

“We have been constantly interacting with outside institutions and emphasizing the importance of diversity. In particular, a series of educational and cultural exchanges with UNIST has been a previous opportunity,” says Dr. Habbal. “I am delighted and truly honored to think that my hard work and dedication towards the mutual development between Harvard SEAS and UNIST has been acknowledged with this conferment.”

“Dr. Harbbal has been a great help for both UNIST and Harvard SEAS to achieve common goals,” says President Mooyoung Jung of UNIST. “His enthusiasum and dedication have truly been an inspiration to us all.”

Fawwaz Habbal is the Executive Dean for Education and Research, Senior Lecturer, and the Director of Graduate Studies in Engineering at Harvard SEAS. Dr. Habbal joined Harvard Engineering in 2002 as the Associate Dean for Academic Planning. Since then, he has contributed immensely to the academic development, as well as the nurturing of next generation of talent. In 2011, he became the Executive Dean of SEAS. He teaches courses in design engineering, electrical and mechanical engineering, nanofabrication, NMES, photonics devices and microfluidics.  He is a member of the Applied Physics research group at SEAS, and is the Director of the Graduate Engineering Studies.

Prior to joining Harvard, Dr. Habbal served as Corporate Vice President at Polaroid Corporation. There he was responsible for research and product design. Throughout this time, his dedication and commitment to the company’s success has been an inspiration to many.

Dr. Habbal has significant publications in materials science, electronics, imaging and nanophotonics. He did postdoctoral research in Raman spectroscopy at the University of Colorado and was senior research fellow at Harvard before his industrial career. Dr. Habbal earned a BS in Mathematics from University of Damascus in Syria and PhD in Physics from University of Cincinnati in Ohio, United States and has several business degrees. To date, he has authored 64 papers, 21 conference papers, 36 invited papers, and 11 patents.