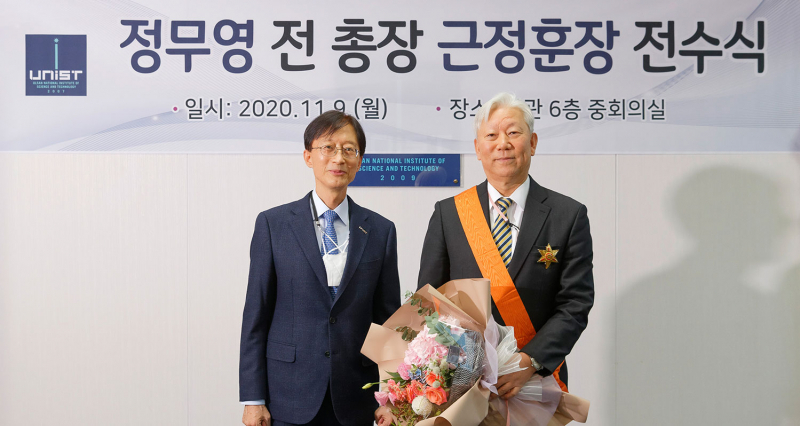 The award ceremony took place in the 6F conference room, located in the the Main Administration Building of UNIST.

On November 9, UNIST held an award ceremony to honor the distinguished achievement of Former President Mooyoung Jung and to give this award to him. The ceremony took place in the 6F conference room, located in the the Main Administration Building of UNIST.

This medal has been given to Former President Mooyoung Jung in recognition of his lifelong dedication and contribution towards the advancement of national education.

Former President Mooyoung Jung was inaugurated as the third president of UNIST in 2015, the same year that marks the official status change of UNIST as a government-funded institute of science and technology. He served until 2019.

Former President Mooyoung Jung already had close ties with UNIST. Since 2008, he has held a variety of executive positions, including Vice President for Academic Affairs to Dean of Research Affairs and to President of Academy-Industry Research Corporation, as well as the Director of the Institute for Mutidisciplinary Research at UNIST. Until recently, Dr. Jung has taken on the position of Vice President for Research Affairs, increasing the research capabilities of UNIST to conduct high quality research.