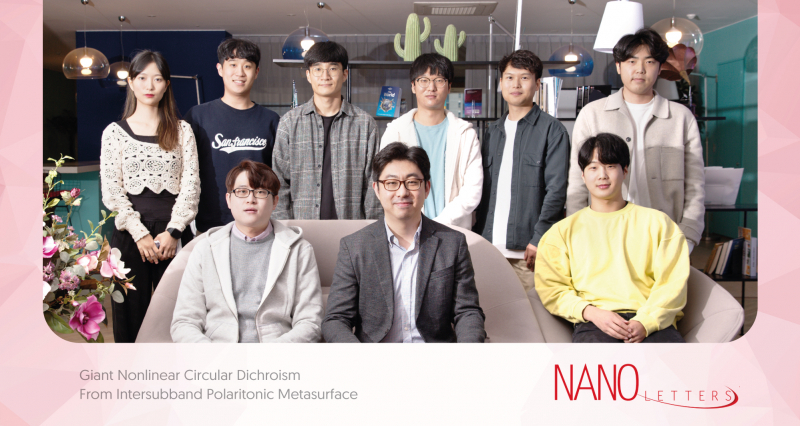 Professor Jongwon Lee and his research team in the Department of Electrical Engineering at UNIST unveiled a new metasurface that can selectively change the wavelength of light according to the rotation direction of circularly polarized light.

Their findings have been published in the November 2020 issue of Nano Letters.

Professor Jongwon Lee and his research team in the Department of Electrical Engineering at UNIST unveiled a new metasurface that can selectively change the wavelength of light according to the rotation direction of circularly polarized light.

The metasurfaces usually consist of a two-dimensional array of engineered subwavelength structures, fine structures that are much smaller than the wavelength of light, also known as meta-atoms. The incident light on the newly-developed metasurface is converted to a new wavelength that is reduced by 1/2 (right polarization) or 1/3 (left polarization) depending on the rotation direction of circularly polarized light. Using this characteristic, it becomes possible to easily obtain mid-wavelength lighting in the mid-infrared region with a shorter wavelength by emitting commercially available long-wavelength infrared lighting onto the metasurface. 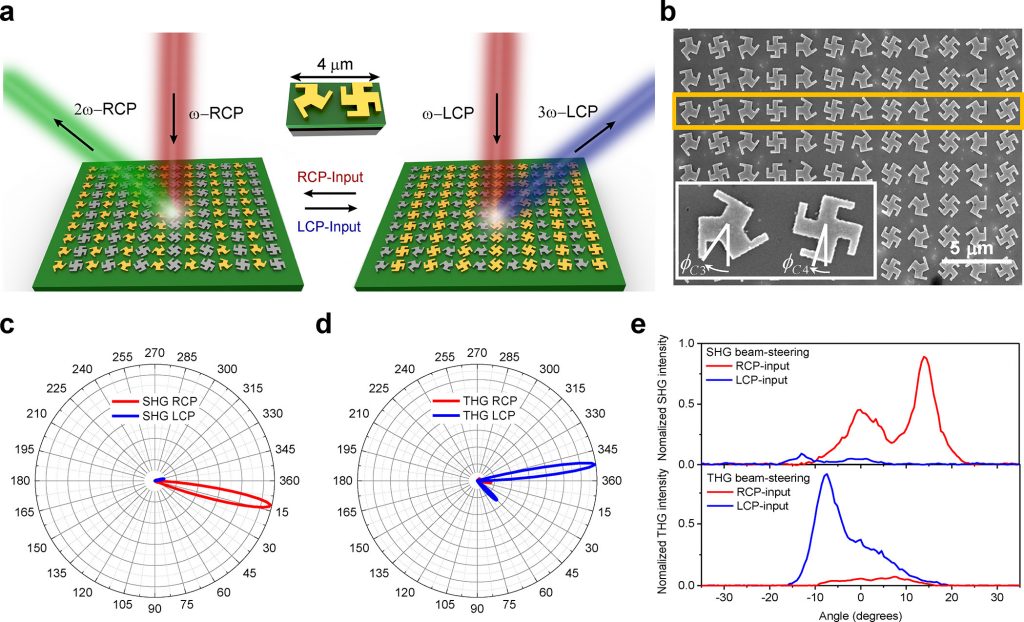 Figure 2. Nonlinear beam steering from a nonlinear chiral metasurface. (a) Schematic illustration of selective generation of the beam-steered harmonic signal. Based on the use of combined unit cell structure (middle image), one of the beam-steered nonlinear signals from SHG and THG can be produced for the RCP (right image) and the LCP (left image) input pump beams, respectively. (b) Top view scanning electron microscopy image of the fabricated nonlinear chiral metasurface designed for selective generation of the beam-steered harmonic signal. The supercell is indicated in the yellow box. Inset: zoomed-in view of the combined unit cell. (c, d) Simulated far-field profiles for the SHG (c) and the THG (d) for the RCP (red) and LCP (blue) input pump beam. (e) Experimental data of far-field profiles of the normalized SHG (upper panel) and THG (lower panel) intensity as a function of the beam-steering angle for the RCP (red) and the LCP (blue) input pump beams.

They also discovered that stark contrast between effective nonlinear susceptibility elements for the two spin states of circularly polarized pump beams was seen in the hybrid structure. Experimentally, near-unity nonlinear circular dichroism and conversion efficiencies beyond 10–4% for a second and third-harmonic generation were achieved simultaneously in a single chip.

“The proposed method is also applicable to near IR(42) and visible(43) wavelength regions using other material compositions,” noted Professor Lee. “Adapting to the advantage of simultaneously inducing a giant nonlinear response and a giant nonlinear CD from the proposed structure can provide an unprecedented and efficient platform for innovative applications such as high contrast nonlinear holography, nonlinear chirality sensors, and nonlinear beam manipulations.”

The findings of this research have been published in the November 2020 issue of Nano Letters. This study has been supported by the mid-career researcher program and the nano·material technology development program through the National Research Foundation of Korea(NRF) funded by the Ministry of Science and ICT (MSIT).