Their work has been selected as the front cover of the September 2018 issue of the Journal of Materials Chemistry.

A recent study, affiliated with UNIST has introduced a novel catalyst that can significantly enhance the performance of perovskite electrodes in Solid Oxide Fuel Cell (SOFC). 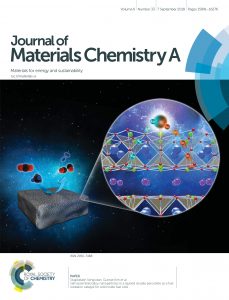 The front cover of the Journal of Materials Chemistry A: Materials for energy and sustainability, Volume 6, Number 33, (2018).

This breakthrough has been led by Professor Gunatae Kim in the School of Energy and Chemical Engineering at UNIST in collaboration with Professor Jeeyoung Shin of Sukmyeong Women’s University, Jeong Woo Hn of Seoul University, and Professor Hu Young Jeong of UCRF at UNIST. The new catalyst forms an alloy in which the internal material of the fuel cell rises to the surface during the operation of the fuel cell. Because of this, it does not break even if you use the hydrocarbon directly, and maintains the performance.

Solid oxide fuel cells (SOFCs) have the potential to become the next major breakthrough as an alternative energy conversion device. One great appeal of SOFC is that it promises more efficient use of abundant, inexpensive natural gas, permitting less overall carbon dioxide emissions than traditional combustion turbines. They use the simple reaction of combining hydrogen and oxygen to produce electricity and water as a by-product.

One of the major challenges to developing affordable hydrogen fuel cells has been storage. This is because Hydrogen is explosive and requires costly containers to hold it safely. As a result, there has been a great increase in the development of SOFCs, using hydrocarbons, such as shale gas, natural gas, methane, propane and butane gas.

The research team has solved the problem with a new catalyst, designed with a layered perovskite structure. At the core of this research is to build a bi-layer perovskite structure (cobalt, nickel) that helps the chemical reactions necessary for electrical production, and when the fuel cell operates, it forms itself by itself.

“Cobalt and nickel are known to be effective catalytic materials for the operation of SOFCs,” says Ohhun Kwon in the Combined M.S./Ph.D. of Energy and Chemical Engineering at UNIST, the first author of this study.  “Previously, these materials were added to make the electrodes, while the new catalysts remained in performance as they formed a “cobalt-nickel alloy.”

In fact, the catalysts developed by the researchers used methane gas directly as a fuel and operated stably with no current drop for more than 500 hours. It is also confirmed that the reaction efficiency of the catalyst is four times higher than that of the previously reported catalyst.

“The existing SOFC anode material (catalyst) was not able to operate reliably for a long time even though it showed high performance initially when using hydrocarbon fuel directly,” says Professor Kim who led the entire research. The newly developed metal alloy catalyst has excellent catalytic performance Which will greatly contribute to the popularization of fuel cells. “