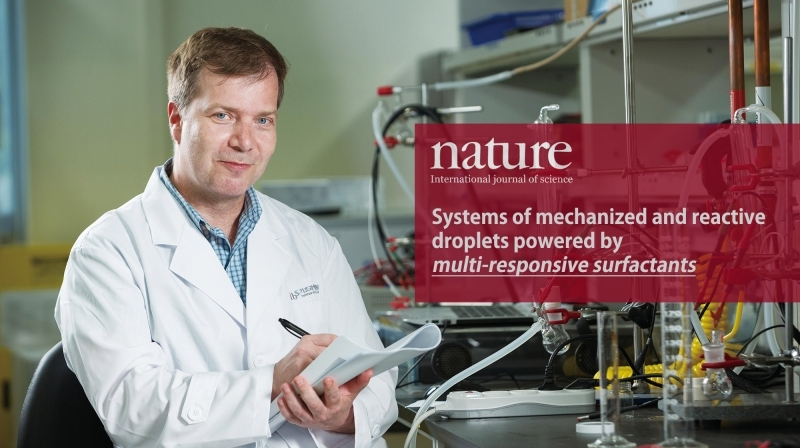 Professor Bartosz A. Grzybowski's team from the Center for Soft and Living Material, within the Institute for Basic Science (IBS) at UNIST.

The work by Distinguished Professor Bartosz A. Grzybowski has been appeared in the January issue of Nature.

New integrated surfactant made with nanoparticles is manipulated by magnetic field, electric field, and light.

When people hear of surfactants, they normally think of a static chemical compound used to stabilize droplets in the manufacture of soaps, detergents, or paints. Research has shown that active forms of surfactants can respond to individual external stimuli, but what if it could interact with more than one? A new study by an international team of researchers, affiliated with UNIST has announced that they have made a surfactant based on nanoparticle dimers, which is responsive to multiple stimuli. The nanosurfactant combines several characteristics of each ‘active’ molecular surfactant which allows a tremendous flexibility whereby liquid droplets can be manipulated.

This study has been conducted by a research team, led by Professor Bartosz A. Grzybowski (School of Natural Science, UNIST) at the Center for Soft and Living Matter, within the Institute for Basic Science (IBS, South Korea). Published in the January 10th issue of Nature, this research opens a variety of potential possibilities, including light-guided 3D printing, coating living cells in nanosurfactants, or virtual microfluid channels with elements which would dissolve traditional channels.

Molecular surfactants, a union of hydrophilic and hydrophobic molecular groups, naturally perch between oil and water. A hydrophilic group sticks to water while a hydrophobic group is immersed in oil. If there is enough surfactant, water would retain the shape of droplets in oil, and vice versa. Previous studies showed that we can modify the molecular structure to make them responsive. For instance, there were surfactants addressable by temperature, electric or magnetic field, light, and chemical agents.

Combing nanoscience and surfactant research, the researchers devised a new class of surfactants consisting of nanoscopic domains within a two-component nanoparticle. One domain is functionized with hydrophilic organic ligands and the other with hydrophobic ones. Such composite nanosurfactants and the droplets they cover are responsive to three kinds of forces: light, magnets, and electrostatic.

The droplets can be manipulated with the high level of light absorbed by the nanoparticles. With the introduction of a laser the droplets move towards the beam and make close-packed structures within seconds, later scattering when the light source is turned off. Turning the laser on and off repeats assembly and scattering, showing the process is reversible and repeatable. When the light is guided to the edge of a droplet, it begins to rotate. If the droplet is located in a packed group, they function as mechanical gears as the rotation of one rotates the others. The speed and direction of rotation can be adjusted by the angle and intensity of the laser. “We can locally induce conductive flows to move particles in the droplets. Just using light, a non-contact force, we can manipulate or drive dynamic assembly of the droplets.” stated Zhijie Yang, co-first author of the study.

As shown above, droplets coated with nanosurfactants are hit with a laser which clumps the droplets into a two-dimensional hexagonal structure and rotates them much like gears. (0:17) Droplets are randomly distributed and then a laser is turned on which attracts them together into a bilayer aggregate. Upon turning the laser off, the ordered structure disassembles until the light is reintroduced and a new ordered structure emerges. (2:17) The same principle is demonstrated with a much larger number of droplets.

Whereas the magnetic and optical field manipulates the position and movement of the droplet, the introduction of an electric field ‘welds’ them into non-spherical or other specific shape liquid droplets. Applying a quick, strong electric field pulse to the point where two or more droplets are touching, causes the surfactant to swirl up and down instantaneously, creating permanent channels through the gaps on the ‘equator’ or even merging the droplets into one larger droplet. Opening a channel between the droplets allow for the mixing of their individual liquid contents.

The most impressive of these discoveries is their combination of seemingly separate abilities into multiresponsive nanosurfactants. “Particle surfactants also have already been invented. But integrating them into one composite is completely different.” said Zhijie Yang. Lasers can move specific droplets, magnetism can hold them in place, and an electrostatic shock can mold them together opening pathways for their contents to mix. The process of mixing can go from hours to minutes by using a laser to spin the merged droplets aiding in convective mixing. By manipulating chemical reactions, behaviors of cells can be mimicked resulting in chemical factories on the nanoscale controlled and not by physical touch but by magnets and light. Bartosz Grzybowski summarizes the process: “The idea is to effect a simple reaction between two droplets. But in very small scale mixing two droplets can take multiple hours. Then by shining a light I can get them to rotate much like a tumbler to mix the contents.”