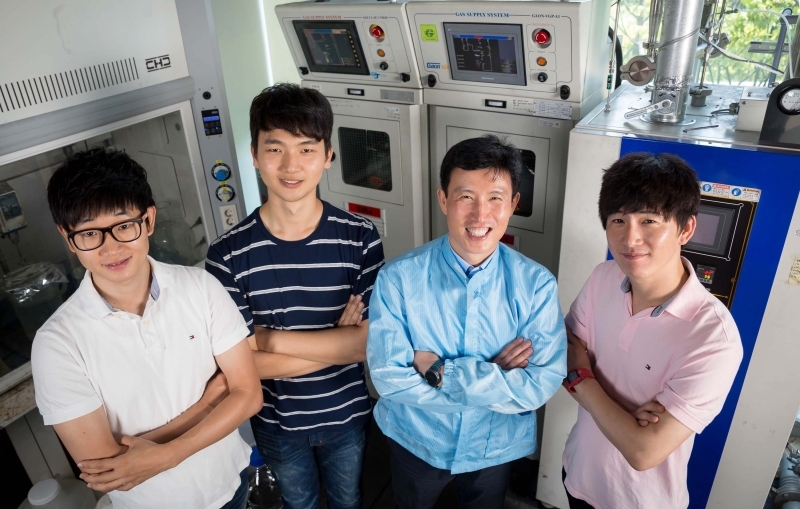 Prof. Jaephil Cho and his research team are posing in their lab at UNIST. From left are Sujong Chae, Namhyung Kim, Prof. Cho, and Jiyoung Ma.

A new approach developed by a team of researchers, led by Prof. Jaephil Cho (School of Energy and Chemical Engineering) could hold the key to greatly improving the performance of commercial lithium-ion batteries.

Prof. Cho and his research team have developed a new type anode material that would be used in place of a conventional graphite anode, which they claim will lead to lighter and longer-lasting batteries for everything from personal devices to electric vehicles.

In the study, the research team has demonstrated the feasibility of a next-generation hybrid anode using silicon-nanolayer-embedded graphite/carbon. They report that this architecture allows compatibility between silicon and natural graphite and addresses the issues of severe side reactions caused by structural failure of crumbled graphite dust and uncombined residue of silicon particles by conventional mechanical milling.

This newly-developed anode material has been manifactured with increase in graphite content in composite by 45%. The research team has also developed new equipment, which is capable of producing 300kg in 6 hours per batch using a small amount of silane gas (SiH4). Such simple procedure is highly esteemed, as it ensures competitive price.

They report that the silicon/graphite composite is mass-producible and it has superior battery performances with industrial electrode density, high areal capacity, and low amounts of binder. The findings of the research have been published in the August issue of the prestigious energy journal Nature Energy.

This work has been supported by the IT R&D programme of the Ministry of Trade, Industry & Energy (MOTIE) and Korea Evaluation Institute of Industrial Technology (KEIT), 2016 Research Fund of UNIST, and by the Office of Vehicle Technologies, Battery Materials Research Program of the US Department of Energy.