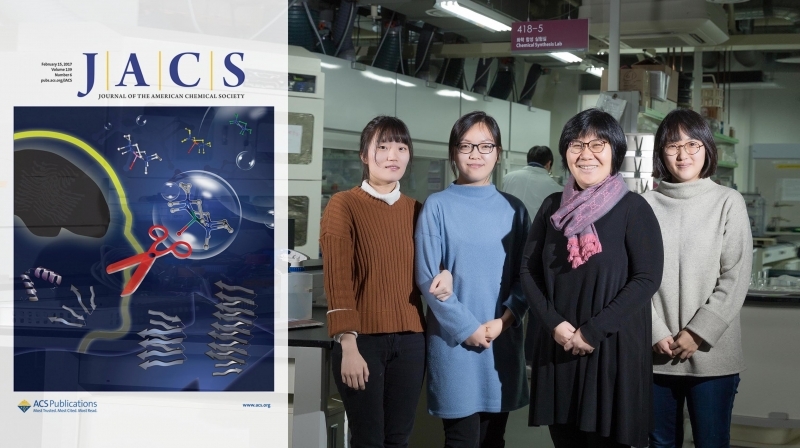 From left are Misun Lee, Eunju Nam, Professor Mi Hee Lim of Natural Science, and Juhye Kang. Their work has been selected to appear on the cover of the January 2017 issue of JACS.

Their work has been selected to appear on the cover of the January 2017 issue of JACS, as well as as a JACS Spotlight article.

Alzheimer’s disease (AD) is one of the most common form of dementia. In search for new drugs for AD, the research team, led by Professor Mi Hee Lim of Natural Science at UNIST has developed a metal-based substance that works like a pair of genetic scissors to cut out amyloid-β (Aβ), the hallmark protein of AD.

The study has been featured on the cover of the January 2017 issue of the Journal of the American Chemical Society (JACS) and has been also selected as a JACS Spotlight article.

In this study, the following four metals (cobalt, nickel, copper and zinc) were placed at the center of the TMC structure. When the double-layered cobalt was added to the center, the hydrolysis activity was at the highest.

The research team reported that the cobalt-based metal complex (Co(II)(TMC)) had the potential to penetrate the blood brain barrier and the hydrolysis activity for nonamyloid protein was low. Moreover, the effects of this substance on the toxicity of amyloid-beta protein were also observed in living cell experiments.

“This material has a high therapeutic potential in the treatment of Alzheimer’s disease as it can penetrate the brain-vascular barrier and directly interact with the amyloid-beta protein in the brain,” says Professor Lim. 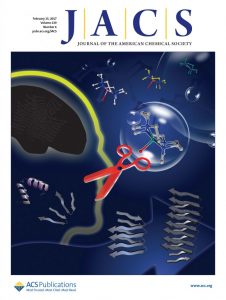 Professor Lim’s work has been selected to appear on the cover of the January 2017 issue of JACS.

This study has also attracted attention by the editor of the Journal of the American Chemical Society. “Not only do they develop new materials, but they have been able to propose details of the working principles and experiments that support them,” according to the editor.

“As a scientist, this is such a great honor to know that our recent publication in JACS was highlighted in JACS Spotlights,” says Professor Lim. “This means that our research has not only been recognized as an important research, but also has caused a stir in academia.”