From left are Kwang Min Kim, Byung‐Man Kim, HyeonOh Shin, and Professor Tae‐Hyuk Kwon in the School of Natural Science at UNIST.

Their findings have been published in the November 2018 issue of Advanced Energy Materials.

A recent study, led by Professor Tae-Hyuk Kwon in the School of Natural Science at UNIST has taken a major step toward the development of a new generation of solar cells, using lead-free perovskites. With its promising electronic properties, the new perovskite material has been demonstrated to function as a charge regenerator with dye‐sensitized solar cells, thus enhancing both the overall efficiency and stability. Published in the November 2018 issue of Advanced Materials, their findings will open new possibilities for the application of lead-free perovskites in solar cells.

Among the various alternatives to lead, the research team used the vacancy‐ordered double perovskite (Cs2SnI6). Despite their promising outlook, the surface states of Cs2SnI6 and their function remain largely unclear. Thus, a comprehensive study is necessary to clarify these features of Cs2SnI6 for the future design of Cs2SnI6‐based devices. 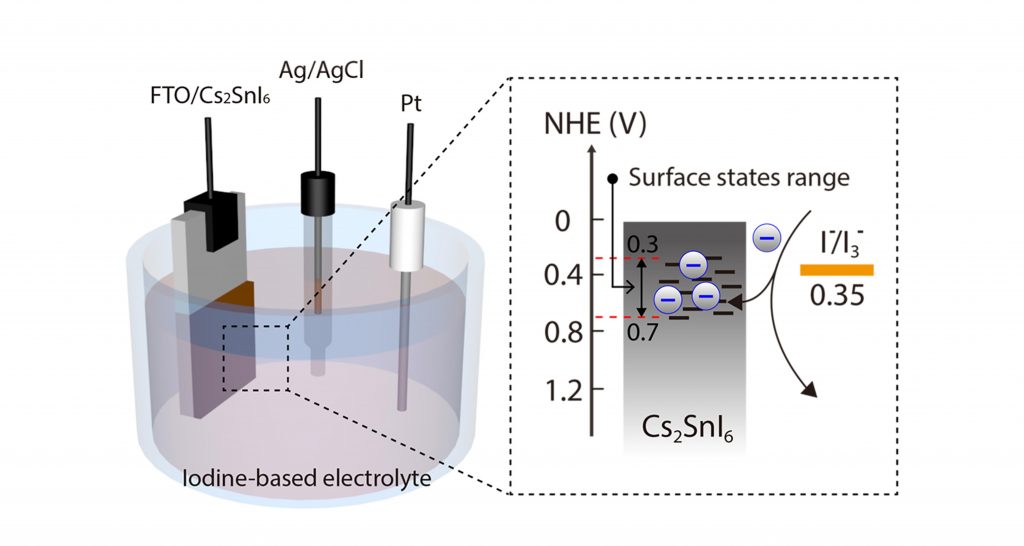 Above is the 3‐electrode system for the observation of charge transfer through the surface state of Cs2SnI6.

“In case of Cs2SnI6, charge transfer occurred through the surface state of Cs2SnI6,” says HyeonOh Shin in the Combined MS./Ph.D in Chemistry at UNIST. “This will aid in the design of future electronic and energy devices, using Pb-free perovskites.”

Based on this strategy, the research team engineered hybrid solar cells, using a Cs2SnI6‐based charge regenerator for organic dye-sensitized solar cells (DSSCs). Such solar cells generate electric current in the process where the oxidized organic dye returns to its original state.

“Due to a high volume of electrical charges in organic dyes that show high connectivity with the surface state of Cs2SnI6, more electric current were generated,” says Byung-Man Kim in the Department of Chemistry at UNIST, another lead author of this study. “Consequently, Cs2SnI6 shows efficient charge transfer with a thermodynamically favorable charge acceptor level, achieving a 79% enhancement in the photocurrent density compared with that of a conventional liquid electrolyte.” 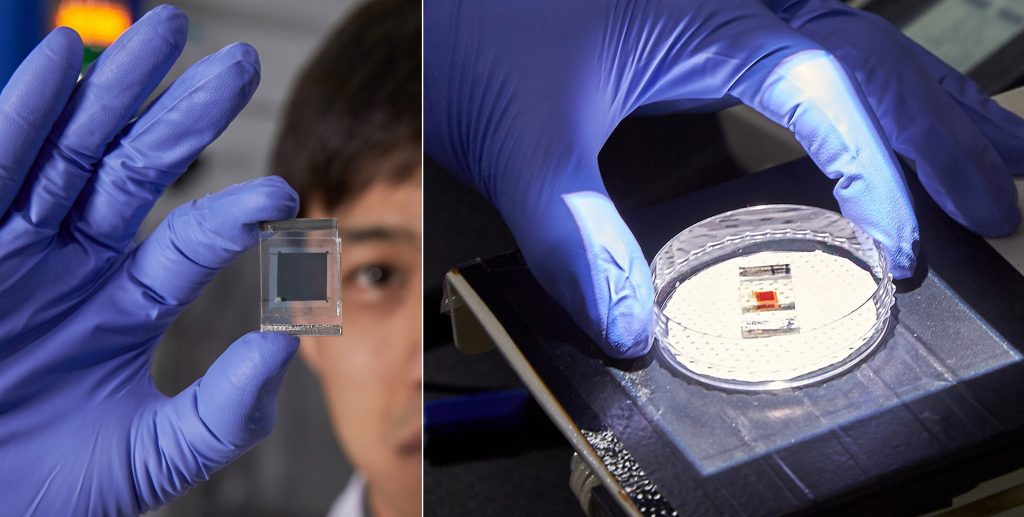 This study has attracted considerable attention among researchers, as it examined the charge transfer mechanism of Cs2SnI6 with the aim of clarifying the function of its surface state. Their results suggest that the surface state of Cs2SnI6 is the main charge transfer pathway in the presence of a redox mediator and should be considered in future designs of Cs2SnI6‐based devices.

This study has been also partificated by Professor Yoonsoo Pang and his research team from Gwangju Institute of Science and Technology (GIST). Their findings have been published in the November 2018 issue of Advanced Energy Materials, a highly prestigious journal in materials science.