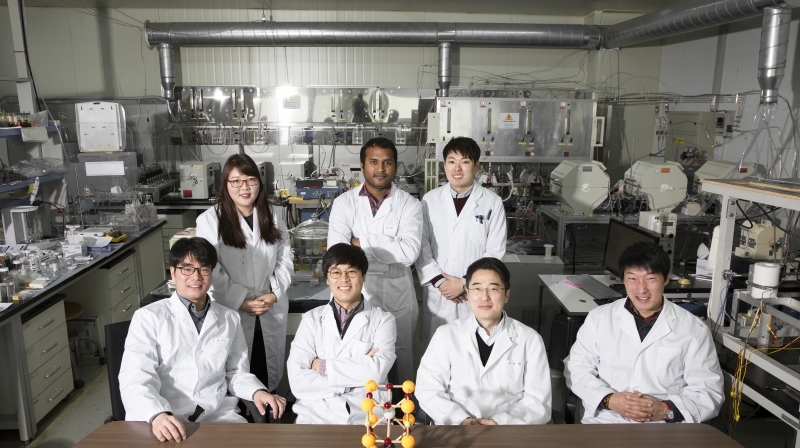 The UNIST research team, led by Prof. Gun Tae Kim (School of Energy and Chemical Engineering) are posing for a group photo in his laboratory.

“With this new material, the manufacturing cost of fuel cells could be cut by 500 billion won.”

SOFCs are considered as one of the most energy-efficient and environmentally frieldly energy conversion devices, but they also have a number of disadvantages, regarding their longevity and performance level. To solve these problems that energy industry is facing at present, a team of scientists, led by Prof. Gun Tae Kim (School of Energy and Chemical Engineering) had engineered a new material for direct hydrocarbon Solid Oxide Fuel Cells (SOFCs) that can directly generate electricity from natural gas.

In this study, the research team demonstrated for the first time that related layered materials can be used as high-performance fuel electrodes. According to the research team, this newly-developed multilayer oxygen-deficient double perovskite material, known as PrBaMn2O5+δ (PBMO) has demonstrated good redox stability with tolerance to coking and sulphur contamination from hydrocarbon fuels.

The team states, “The new PBMO layered perovskite structure retains high electrical conductivity in both air and ​hydrogen atmospheres.” Indeed, test cells based on these cathode materials demonstrate high conductivity of 8.16 S cm−1 in 5% Hydrogen (​H2) at 800 °C and peak power densities of 1.7 and 1.3 W cm−2 at 850 °C, representing an important step toward full commercialisation of SOFC technologies.” Moreover, when they tested the cell at 700 degrees Celsius using propane fuels as an energy source, the carbon did not adhere to the electrode and the level of cell performance increased by three times. They say, they were able to maintain such level of performance for more than 500 hours.

The above figure shows the phase change of Pr0.5Ba0.5MnO3 to layered PrBaMn2O5+δ occurs under a reducing atmosphere. (Source: http://www.nature.com/nmat/journal/v14/n2/full/nmat4166.html)

This discovery will become a major breakthrough in the global market in that “With this new material, the manufacturing cost of fuel cells could be cut by 500 billion won,” said Prof. Kim.

This research has been supported by the Ministry of Science, ICT and Future Planning (MSIP) of Korea, under the Mid-career Researcher Project to support outstanding mid-career professionals with excellent research proposals. This scientific research finding appeared online in Nature Materials on December 23, 2014.