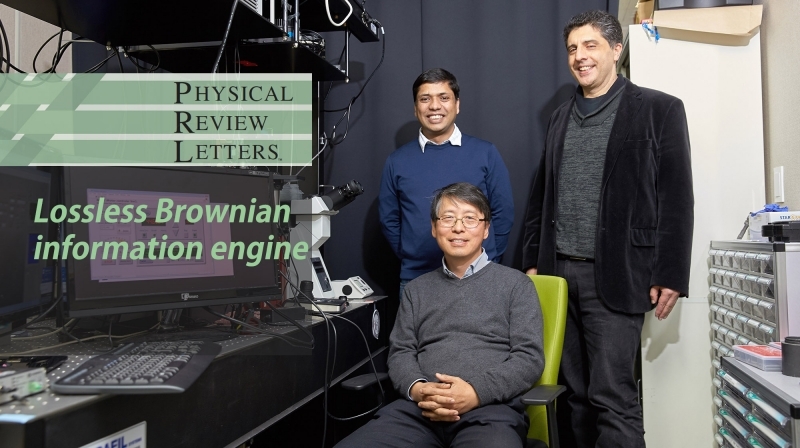 Professor Hyuk Kyu Pak (center) and his team from the Center for Soft and Living Material, within the Institute for Basic Science (IBS) at UNIST.

The work by Professor Hyuk Kyu Pak has been published in the January 2018 issue of Physical Review Letters.

An international team of researchers, led by Professor Hyuk Kyu Pak (School of Natural Science, UNIST) of IBS Center for Soft and Living Matter has announced that they had succeeded in creating an information engine with an efficiency that exceeds conventional second law of thermodynamics.

In the study, the research team report on a lossless information engine that converts nearly all available information from an error-free feedback protocol into mechanical work. According to them, this is the first information engine to conform to a recently proposed generalized second law of thermodynamics. 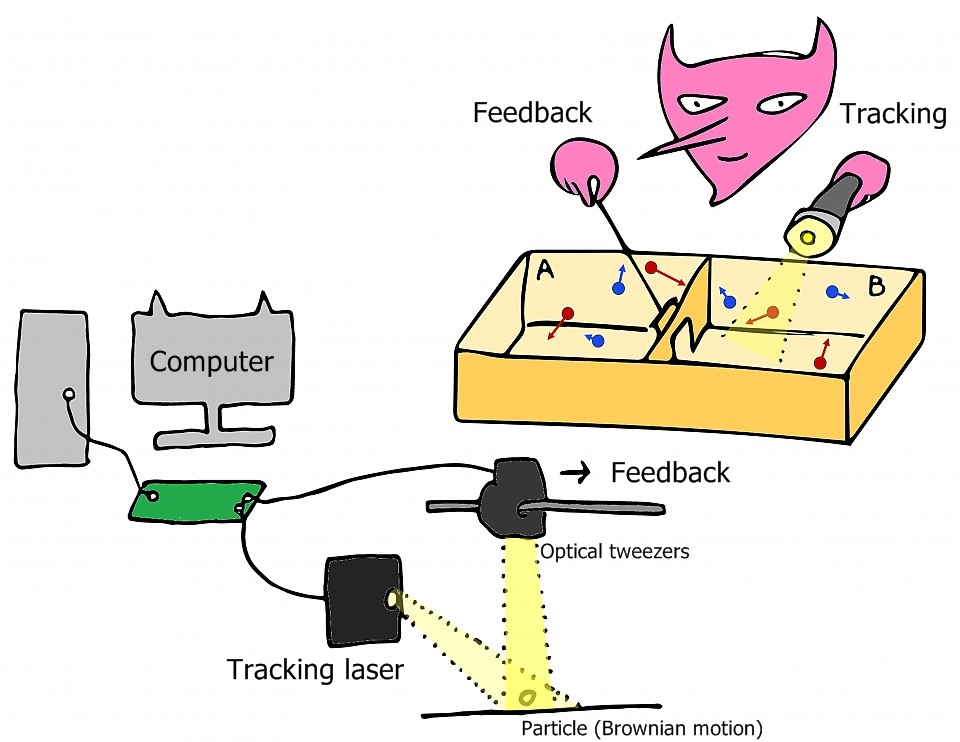 The illustration of the experiment. Photo Credit: Burdette Choi, Institute of Basic Science

Combining high-precision detection at a resolution of 1 nanometer with ultrafast feedback control, the engine is tuned to extract the maximum work from information on the position of a Brownian particle. Their results demonstrate both the feasibility of realizing a “lossless” information engine—so-called because virtually none of the available information is lost but is instead almost entirely converted into work—and also experimentally validates the sharpness of the bound set by the generalized second law.

“Thinking about engines has driven the progress of thermodynamics and statistical mechanics ever since Carnot set a limit on the efficiency of heat engines in 1824,” Professor Pak, an author of this study, stated to Phys.org. “Adding information processing in the form of ‘demons’ set new limitations, and it was essential to verify the new limits in experiment.”

To achieve the maximum efficiency set by the generalized second law, Professor Pak and his team designed and implemented an information engine made of a colloidal particle trapped by light at room temperature. Random thermal fluctuations cause the tiny particle to move slightly due to Brownian motion, and a photodiode tracks the particle’s changing position with a spatial accuracy of 1 nanometer. If the particle moves more than a certain distance away from its starting point in a certain direction, the light trap quickly shifts in the direction of the particle. This process repeats, so that over time the engine transports the particle in a desired direction simply by extracting work from the information it obtains from the system’s random thermal fluctuations (the free energy component here is zero, so it does not contribute to the work extracted).

The measurement-feedback-relaxation cycle of the Brownian information engine.

One of the most important features of this system is its nearly instantaneous feedback response: the trap shifts in just a fraction of a millisecond, giving the particle no time to move further and dissipate energy. As a result, almost none of the energy gained by the shift is lost to heat, but rather nearly all of it is converted into work. By avoiding practically any information loss, the information-to-energy conversion of this process reaches approximately 98.5% of the bound set by the generalized second law.

The results lend support for this bound, and illustrate the possibility of extracting the maximum amount of work possible from information. Besides their fundamental implications, the results may also lead to practical applications, which the researchers plan to investigate in the future.

“Both nanotechnology and living systems operate at scales where the interplay between thermal noise and information processing is significant,” says Professor Pak. “One may think about engineered systems where information is used to control molecular processes and drive them in the right direction. One possibility is to create hybrids of biological systems and engineered ones, even in the living cell.”

Their work has been published in the January 2018 issue of Physical Review Letters (IF=8.462).