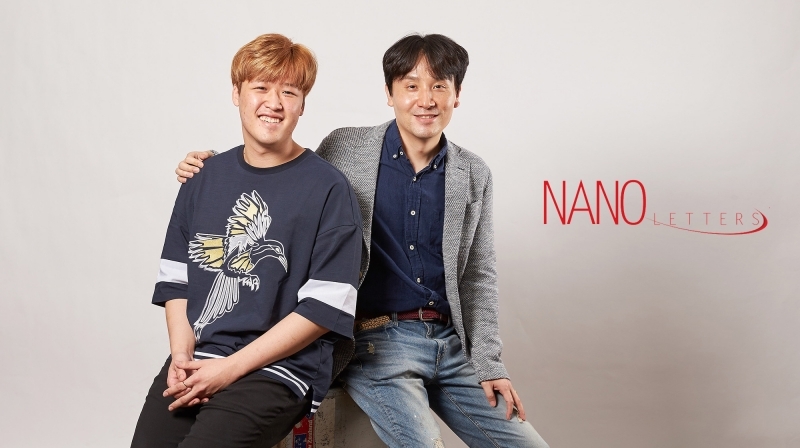 From left are Byeong Wan An in the Combined M.S./Ph.D. of Materials Science and Engineering and Professor Jang-Ung Park at UNIST.

Their findings have been published as an ASAP article in Nano Letters.

A recent study, affiliated with UNIST has introduced a novel method for the fabrication of highly transparent silver nanowires (AgNWs) that are nearly invisible to the naked eye. This flatly played down the likelihood of applying the technology to create a smart film, specialized in displaying information on glasses and preventing frost on automotive windshields.

This study has been led by Professor Jang-Ung Park in the School of Materials Science and Engineering at UNIST in collaboration with Professor Sun-Kyung Kim in the Department of Applied Physics from Kyung Hee University. In the study, the team has succeeded in engineering a ‘99% transparent metal electrode by forming an oxide film on the transparent electrode, light scattering is minimized and electrode transparency is dramatically improved.

The researchers placed the AgNWs with a thickness of 1 μm in a mesh structure and partially oxidized the surface to form an oxide film of 100 nanometers. Such electrodes completely inhibited the scattering of light produced by the silver nanowires and exhibited extremely high transparency of 99% when compared to the existing glasses without silver nanowires. At the same time, it also showed electric conductivity twice as high as that of the conventional ITO transparent electrode.

The team also succeeded in developing a ‘transparent heater’ for automobile glasses, using the new AgNWs. The transparent heater installed on a toy car glass, quickly removed the fogging without blocking the view.

The findings of this study have been published as an ASAP (As Soon As Publishable) article in Nano Letters, one of the most prestigious journals in the field of materials engineering issued by the American Chemical Society.