Their findings have been published in the journal Nature Communications on June 14, 2019.

A recent study, conducted jointly by Professor Geunsik Lee in the School of Natural Science at UNIST and Professor Xiang Zhang at UC Berkeley in the United States of America, showed that van der Waals (vdW) forces can be used to resolve such issue, thus has drawn considerable academic attention.

In their study, published in the journal Nature Communications, the researchers demonstrated the feasibility of realizing a new concept of “2D heterostructure multiferroics “. The proposed method is a new way of enhancing the interaction between two properties by tightly binding ferromagnetic and ferroelectric materials via chemical bonding. The method, which has been tested by the researchers via their theoretical calculations, use chemical bonding by the vdW forces.

Multiferroic materials, which show simultaneous ferroelectric and magnetic ordering, can control the magnetism by electric field or vice versa. The technique to control the magnetism by electric field is especially essential for the development of high-density memory devices. To implement this technique, the larger the interaction between those ferroic orders, the better it is.

Extensive studies have been done on multiferroics, containing both ferromagnetism and ferroelectricity in a single material. Yet, all those materials have failed to exhibit multiferroic behavior at room temperature. For this reason, particular attention has been drawn to the new method of implementing “2D heterostructure multiferroics”, where ferroelectric materials and magnetic materials are being combined together.

In the study, the research team has proposed the new concept of ‘Non-covalent 2D heterostructure multiferroics’ by stacking up atomic layers of ferromagnetic Cr2Ge2Te6 and ferroelectric In2Se3, thereby leading to all-atomic multiferroicity. They also experimentally and theoretically investigated the ferromagnetic and ferroelectronic properties of 2D heterostructure multiferroics. This combined experimental and theoretical investigation reveals the new multiferroics are capable of having full control of the magnetism by electric field, even at the interface between the two materials.

Here, the forces assumed by the researchers were not the covalent bonding, but the Van der Waals forces. The term ‘Van der Waals force’ refers to momentary attractions between molecules, like diatomic free elements and individual atoms. These forces may be attractive or repulsive, depending on the distance between the molecules involved. 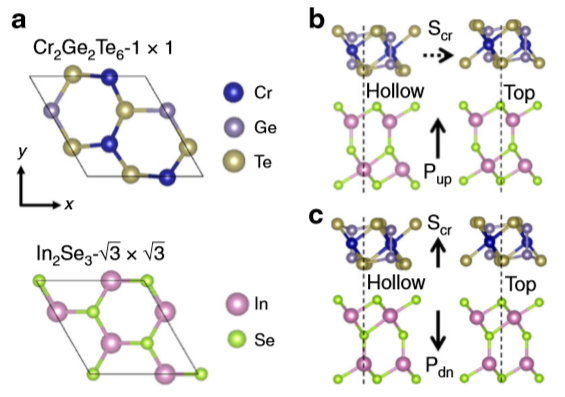 The researchs employed first-principles DFT calculations on a vdW heterostructure consisting of ferromagnetic Cr2Ge2Te6 and ferroelectric In2Se3 monolayers. By reversing the electric polarization of In2Se3, the calculated magnetocrystalline anisotropy of Cr2Ge2Te6 changes between easy-axis and easy-plane (i.e., switching on/off of the ferromagnetic order), which promises a novel design of magnetic memory. Furthermore, In2Se3 becomes magnetic ferroelectrics, with switchable spin polarizations according to its own electric polarization.

“Theoretically, we have proven that the layered ferroelectric and ferromagnet can be chemically coupled with van der Waals forces to change the magnetic properties to a much larger value than the conventional ones,” says Professor Geunsik Lee.  “We envision the multiferroicity duality potentially enriches the freedom of layer-resolved data storage and that of information processing due to the diverse magnetoelectric and magneto-optic properties of constituent layers.”

The findings of this study have been published in the journal, Nature Communicataions on Friday, June 14, 2019. This research has been supported by the National Research Foundation (NRF) of Korea (Basic Science Research Program) and Korea Institute of Science and Technology Information (KISTI).