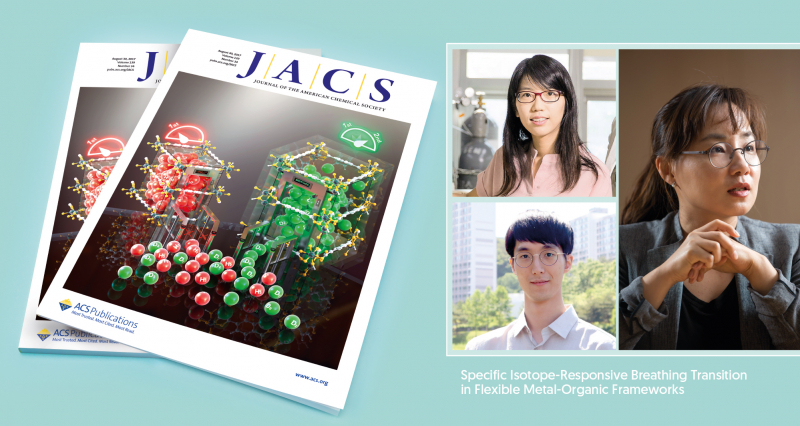 Their findings have been featured as a cover page of the July 2020 issue of the Journal of the American Chemical Society (JACS).

A team of researchers, affiliated with UNIST has introduced a novel responsive system, capable of molecular recognition of physicochemically similar mixtures, such as isotopes. This will provide a simple, cost-effective solution for generating heavy hydrogen, which are raw materials essential for nuclear fusion power generation.

Professor Hoi Ri Moon and her research team, in collaboration with Professor Hyunchul Oh from Gyeongnam National University of Science and Technology (GNTECH) and Professor In Hwan Oh from Korea Atomic Energy Research Institute (KAERI) reported a deuterium-selective and responsive system (over hydrogen) for the first time, which can be realized through the second breathing transition of the flexible metal-organic frameworks (MOF), under given temperature and pressures. This has the potential to enable efficient separation of deuterium from gaseous hydrogen. In recognition of that importance, their findings have been featured as a cover page of the July 2020 issue of the Journal of the American Chemical Society (JACS). 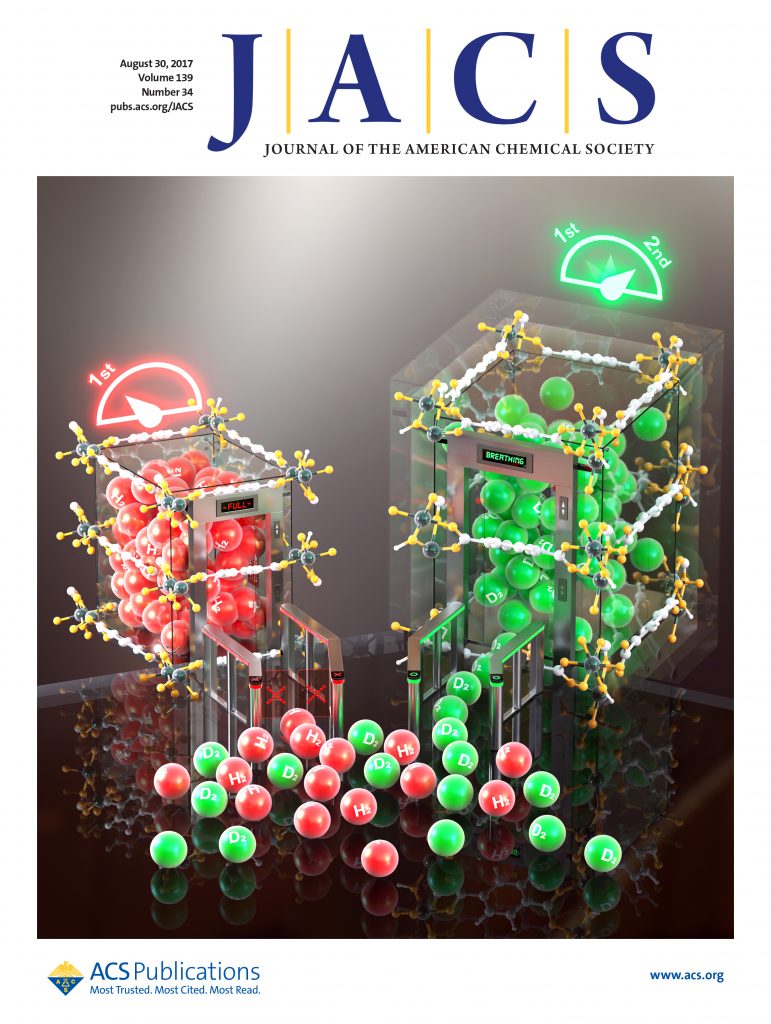 Their findings have been featured as a cover page of the July 2020 issue of JACS.

The arc reactor, which appears in the movie ‘Iron Man’ uses nuclear fusion power to create explosive energy. Deuterium, which is the raw material of this arc reactor, is a hydrogen isotope that has more neutrons, than ordinary hydrogen. Because deuterium constitutes 0.016% of total hydrogen occurring in nature, separating it from hydrogen has been challenging. As an alternative option, an isotope-selective responsive system based on molecular recognition in porous materials was suggested for the storage and purification of isotopic mixtures, yet it has been considered unachievable because of the almost identical physicochemical properties of the isotopes.

In the study, Professor Moon and her research team reported a unique isotope-responsive breathing transition of the flexible metal-organic framework (MOF), MIL-53(Al), which can selectively recognize and respond to only D2 molecules through a secondary breathing transition. This interesting isotope-responsive breathing phenomenon of MIL-53(Al) was observed using H2 and D2 sorption analyses measured at temperatures ranging from the boiling point (20 K for H2 and 23 K for D2) to 60 K and pressure ranging limited up to 1 bar due to a technical limitation. 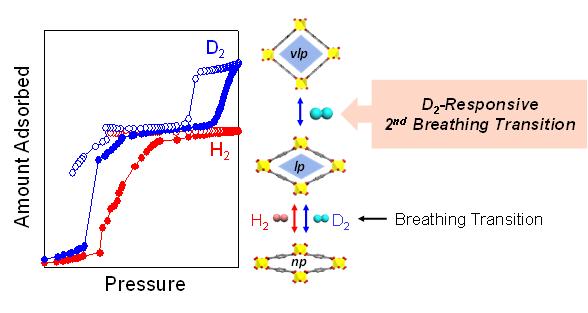 The MIL-53(Al) is a representative of flexible MOFs with a network structure, resembling that of a long rubber tube with both ends open. The structural transitions upon deuterium adsorption were carefully studied through in situ neutron diffraction experiments, using MIL-53(Al). At a cryogenic temperature (-253℃), MIL-53 (Al) exhibits structural transformation from a narrow-pore domain (0.26 nm, 1 nm = billionth of a meter) to a large-pore domain (0.67 nm) upon hydrogen gas adsorption. When increasing temperature to -248℃, while keeping the pressure between 800 to 1000 mbar, the pore structure of MIL-53(Al) expands to 0.86 nm via second breathing transition of MIL-53(Al). The second breathing transition was caused by deuterium, only.

“This study once again demonstrates the potential of flexible MOF systems to the separation of hydrogen isotopes,” says Professor Moon. “We believe that this study has opened new avenues for the development of a novel isotope-selective recognition system and provide opportunities to fabricate flexible MOF systems for energy-efficient purification of the isotopic mixture.”

“This novel result about isotope-responsive breathing is of broad interest for the large community of MOF researchers,” says Professor Oh. “We, also, believe that this study opens new avenues for developing novel smart materials capable of simultaneously recognizing and responding to specific isotope molecules and for a wide range of applications.”

This research, which has been jointly participated by Professor Sung Gu Kang (School of Chemical Engineering, University of Ulsan) and Professor Jitae T. Park (Research Neutron Source Heinz Maier-Leibnitz, FRM II), has been supported by the National Research Foundation of Korea (NRF) via the Mid-career Researcher Program, as well as the Basic Nuclear Research Program.