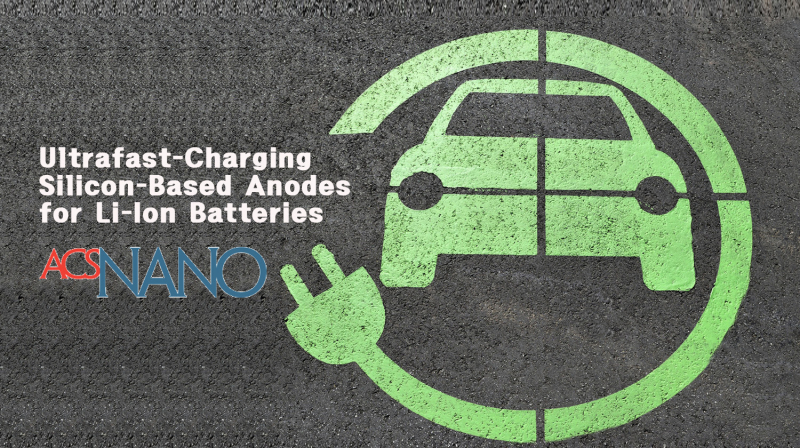 Their findings have been published in the February 2019 issue of ACS Nano.

An international team of researchers, affiliated with UNIST has paved the way for the development of next-generation batteries, targeting high-performance electric vehicles (EVs). This is thanks to the development of new silicon-based coral-like anode materials to replace conventional graphite. By overcoming challenges related to the swelling and fractures of silicon nanowires during charging, researchers also achieved high volumetric energy and power densities after long-term cycling.

This study has been led by Distinguished Professor Rodney S. Ruoff’s research group at the IBS Center for Multidimensional Carbon Materials (CMCM) at UNIST, in collaboration with Professor Soojin Park and his research team at Pohang University of Science and Technology (POSTECH). Their findings, published in the February 2019 issue of Acs Nano, offer promise for meeting fast-charging requirements

Professor Park and his research team made major contributions by evaluating the battery performance of this new material and found that is can perform well even under ultrafast charging for test anodes in both half cell (pairing with a Li metal anode) and full cell (pairing with a cathode that closely mimics real commercial cathodes) as lithium-ion batteries (LIBs). The full batteries showed promising volumetric energy and power densities that might meet new expectations for fast-charging LIBs. 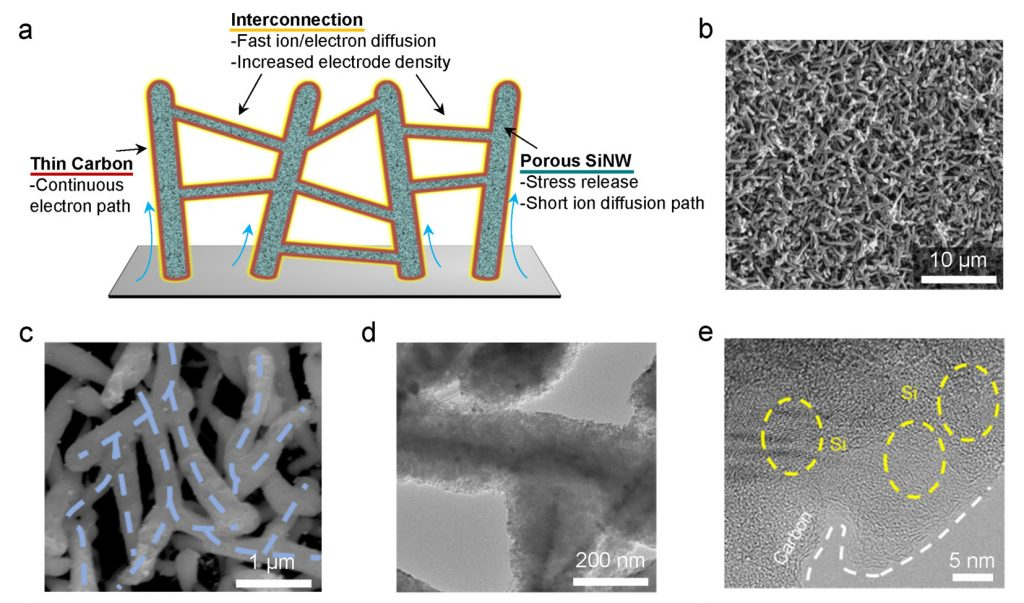 Characterization of a N-PSi@C electrode.

Reducing the charging time and increasing the energy storage in LIBs are urgent challenges that need to be met, including considering the rapidly increasing demands of high-performance electric vehicles. Configuring materials for electrodes that yield high volumetric/gravimetric capacity and that can be operated at high-rate is perhaps the most challenging part of this process. Silicon is a promising anode material due to its ultrahigh specific capacity, but silicon-based batteries face the structural instabilities problems during rapid charge cycling. Silicon undergoes a large volume change during ‘lithiation’ (charging) and ‘delithiation’ (discharging-supplying the electric current), causes the silicon particles to break apart (to fracture). When such breakage occurs there is (new) freshly exposed surface, which causes new solid electrolyte interphase (SEI) formation an undesirable effect that consumes the electrolyte and also lithium and hinders performance.

The authors addressed these issues through a new electrode design and its implementation. “Several aspects were considered when designing this material: First, an interconnected three-dimensional network of silicon nanowires that improves electron transport in the entire electrode was targeted; Second, to promote ion transport, we combined the macro-pores between the silicon nanowires and the nano-pores inside the nanowires to provide channels for fast ion transport; Finally, a conformal and thin coating of layers of carbon was achieved that reduced the resistance in the system, and also provided a barrier to stop this undesirable thickening of the SEI and to accommodate the volume change of the silicon nanostructures,” said co-first author Dr. Bin Wang. Through the collaboration with experts in China and Korea the network of interconnected carbon-coated porous silicon nanowires as a binder-free anode in LIBs was achieved and tested in ‘real battery’ analogues. 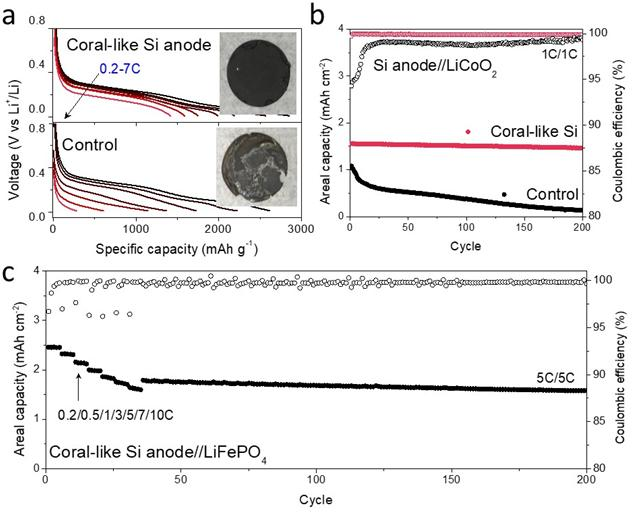 Professor Soojin Park at POSTECH and co-first author Dr. Jaegeon Ryu from Prof. Soojin Park’s group thoroughly tested this new material as an anode in test cell LIBs. It was first assembled into a ‘half-cell’ to check its intrinsic properties. “This material exhibited an excellent high-rate performance. At a 7 C-rate, it delivered a reversible capacity of 1275 mAh g-1 after 500 cycles, and its Coulombic efficiency per cycle reached 99.5% at the second cycle and the average Coulombic efficiency was 99.9% for further cycles. This high performance is closely related to the highly interconnected porous structure directly grown onto the current collectors and the conductive carbon sheath coating,” noted Dr. Jaegeon Ryu.

Professor Park noted “The results are competitive in the field of silicon-based LIBs, among the best results from the previous silicon-based anodes and offers promise for meeting fast-charging requirements.” When it comes to the future developments, Professor Ruoff added “If cathode materials are further developed with higher capacity and faster Li-ion transfer kinetics, the overall battery specifications can be further improved to advance the realization of Si-based anodes for fast-charging capability with high volumetric energy density.”

This research has been supported by the Institute for Basic Science, the Center for Advanced Soft-Electronics, and the National Natural Science Foundation of China. Professor Linjie Zhi and Professor Xianglong Li at the National Center for Nanoscience and Technology (NCNST) in the Chinese Academy of Sciences, and Professor Didier Pribat in the Sungkyunkwan University also partook in this study.