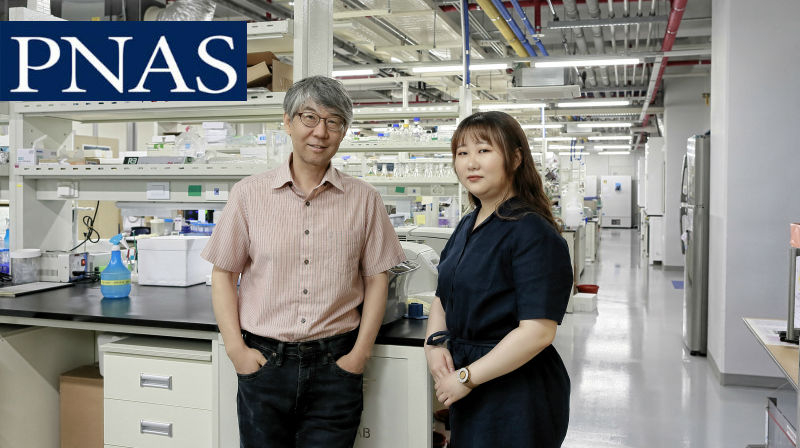 From left are Professor Kyung-Tai Min and Soyeon Lee in the School of Life Sciences at UNIST.

Their findings have been published in PNAS on July 23, 2019.

A nerve cell that rarely heals once it is injured by a traffic accident or disease. The protein that revived these cells was discovered. It is expected to present a new direction in the development of therapeutic agents for regenerating damaged brain or spinal cord nerves.

A research team, led by Professor Kyung-Tai Min in the School of Life Sciences at UNIST has identified the principle that the protein ‘Grp75 (Glucose regulated protein 75)’, a protein linking organelles in cells, regenerates damaged nerves. In addition, Grp75 protein was injected into the nerve-impaired mice to confirm that exercise capacity and sensory capacity were restored.

Neurons connect the human brain with the body, accept the senses, and regulate the movement. These cells have axons that are long and extended in the shape of a twig. In particular, serious injury to the brain or spinal cord, which is the central nervous system, leads to severe disabilities such as sagging or paraplegia.

However, the molecular and cellular mechanisms of neuronal regeneration have not been well understood. In addition, research on this process to restore the ability to regenerate neurons was also less than a study suggesting. In this work, Professor Min and his research team looked at the regeneration process after neuronal damage and found a key protein.

When neurons are damaged, several cellular responses to regeneration appear. First, the endoplasmic reticulum and mitochondria move to the end of the axon. The endoplasmic reticulum is responsible for repairing the torn membranes, and the mitochondria responsible for providing the energy needed for the cell reaction. However, at this time, the supply of energy is not sufficient than the demand for energy, and the regeneration of the nerve cells is not performed smoothly.

The team focused on Grp75, a protein that links the endoplasmic reticulum and mitochondria. The increase in this protein predicts that the interaction between the endoplasmic reticulum and mitochondria increases and helps with cell regeneration. In fact, the researchers have proved this through experimental mice. The nerve cells that pass through the thighs, the ‘sciatic nerve’, induce the overexpression of the Grp75 protein in damaged mice, confirming nerve cell regeneration. 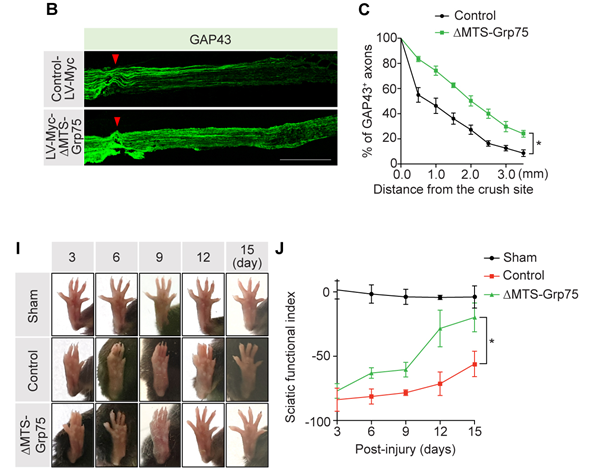 “Overexpression of Grp75 increases ER–mitochondria contacts,” says Soyeon Lee in the Combined M.S/Ph.D. of Life Sciences at UNIST, the first author of the study. “This has provided the energy need to regrow injured axons.”

“Through this study, we have found that an increased level of Grp75 in DRG neurons promotes axon regeneration and functional recovery of animals with nerve injury,” says Professor Min. “Our results raise the exciting possibility that overexpression of cytoplasmic Grp75 may be a therapeutic strategy to treat and enhance axonal regeneration, following nerve injury.”

This study has been supported by the National Research Foundation of Korea (NRF) and funded by Samsung Research Funding & Incubation Center for Future Technology. Their results have been published in the internationally-renowned scientific journal, PNAS on July 23, 2019.