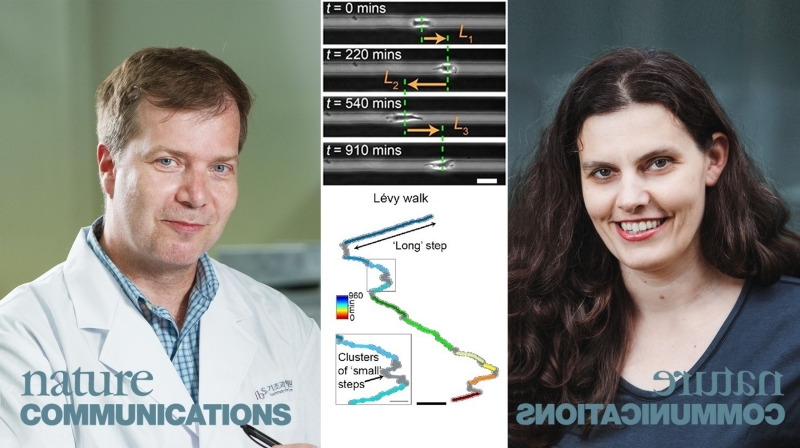 Their findings have been published in the latest issue of Nature Communications.

In searching for sparsely distributed food, animal predators maximize their chances of success by adopting a special movement pattern composed of many small steps interspersed with infrequent, but long strides towards new hunting grounds. These patterns, known as ‘Lévy walks’ have been studied for several decades and observed in foraging mammals, birds, sharks, and even immune cells searching for infected cells.

Metastatic cancer cells differ from their non-metastatic counterparts not only in their genetics, but also in their moving strategy: they spread more rapidly and are more directional than non-invasive cancer cells.

An international team of researchers, affiliated with UNIST has reported that metastatic cancer cells follow a similar movement pattern to the way marine predators search for prey.

This breakthrough has been jointly led by Distinguished Professor Bartosz Grzybowski (Schoool of Natural Science) and Adjunt Professor Kristiana Kandere-Grzybowska (Schoool of Natural Science) from the Center for Soft and Living Matter within the Institute for Basic Science (IBS) at UNIST in collboration with several other institutes in the United States, the Netherlands, and Poland. Published in the October 2018 issue of Nature Communications, this is the first study to clarify their navigation patterns.

In this work, the research team used prostate, breast and skin cancer cells in metastatic and non-metastatic stage, introduced them in linear microtracks and measured the cells’ step size and turning points for up to 16 hours. Moreover, the scientists tracked the trajectories of individual melanoma cells directly inside living mouse skin, at a depth of 600 micrometers. In all cases, metastatic cells moved according to the Lévy walk, while non-metastatic cancerous cells took only small steps, a pattern known as diffusive motion. 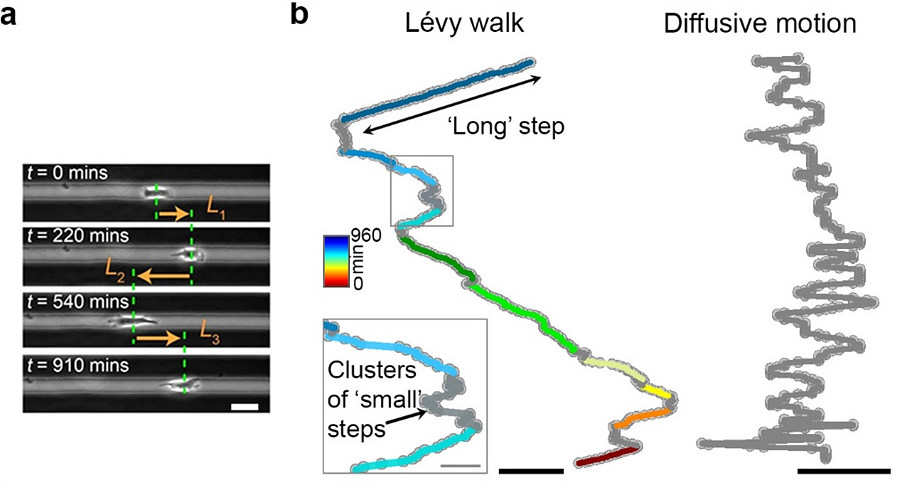 In animals, the Lévy walk is thought to correspond to an optimal search strategy for sparsely and randomly distributed resources. Although it is presently unclear why metastatic cells perform such predatory motions, one hypothesis is that they capitalize on it to find suitable places where to seed deadly secondary tumors.

Interestingly, the research team could also reprogramme the metastatic cell’s Lévy walk. Using specific chemical inhibitors or short interfering RNA (siRNAs), the scientists blocked selected proteins involved in structuring the cellular skeleton and protrusions. These experiments changed the Lévy-walking back to unidirectional motions or diffusive migrations: “The deadly cellular wolves start moving like cuddly sheep!” emphasizes Distinguished Professor Bartosz Grzybowski, who co-led this study. He warns, however, that these results have no clinical bearing yet and more work, both experimental and theoretical, should be performed to fully understand these phenomena.

This result comes after a decade of research. “Lévy walks can be easily mistaken for other types of motility patterns, for this reason large numbers of cell trajectories and quite complex statistical-physics analyses were needed to make sound conclusions,” explains Distinguished Professor Grzybowski. “It was well worth the effort, now theorists and experimentalists speak the same language.”

This work used a wide variety of modern spectroscopic techniques, from optical and confocal microscopes to quantify cell motions ex vivo (on chemically modified micropatterns or in tissue-mimicking gels), all the way to top-of-the-line intravital two-photon microscopes capable of tracking individual cells migrating away from tumors implanted in live animals.

“This study is quite indicative of the technical complexity of modern cell biology in understanding cancer. Considering all microscopes, RNA techniques to modify cell dynamics, and statistical physics involved, one starts seeing how diverse the toolkit of modern cell biologists has become,” concludes Professor Kristiana Kandere-Grzybowska, the other corresponding author of the study. “Cancer is a multifaceted disease, and it is probably not that surprising that understanding its manifestations requires interdisciplinary approaches. What is surprising, though, is how cunning these metastatic cells can become in navigating through the body.”