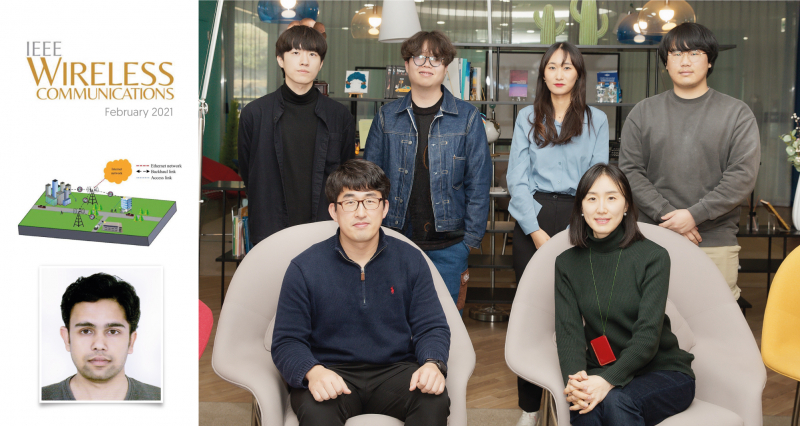 Professor EunMi Choi and her research team in the Department of Electrical Engineering at UNIST.

Their findings have been published in the February 2021 issue of IEEE Wireless Communications Magazine.

Today, we live in a hyperconnected society where the amount of data is exploding, along with an exponential increase in the volume of data transmission. In response to this demand, the commercialization of the 6G communication technology, which promises to achieve a data transmission speed up to 50 times faster than the current 5G is necessary. However, this requires the development of novel radio resources, as well as a method and apparatus for quantifying them.

A research team, led by Professor EunMi Choi and her research team in the Department of Electrical Engineering at UNIST has proposed a novel formalism of OAM wireless channel DoF analysis and its simulation and experimental verification for conventional LG and evanescent circular transverse electric (TE) beams.

Orbital Angular Momentum (OAM) multiplexing has been regarded as a potential candidate for overcoming the limitations of the existing wireless communication technology due to the existence of infinite orthogonal modes. It has also been envisioned as a supporting infinite degree of freedom (DoF) and an infinite channel capacity for free-space line-of-sight (LoS) communication in optical and radio frequency (RF) channels, noted the research team. However, it has long been argued that OAM-based multiplexing can provide infinite channel capacity. This is because the OAM modes can be generated with infinite order without disrupting their orthogonality property, regardless of the transmitter and receiver sizes.

In this study, the research team determined the DoF calculation of the OAM wireless communication link with a novel approach by introducing the most generalized physical quantities: paraxiality and orthogonality for generalized free-space OAM modes. According to the research team, this analysis was based on the key physical characteristic of OAM modes that are solutions of the Helmholtz equation with the paraxial condition, and applicable to practical sizes of transmitter/receiver antennas and the propagation distances.

Researchers calculated the paraxial estimator of those OAM beams (LG or TE beams) and relating it as a parameter that limits the degree of freedom in OAM channels. They, thus, investigated the dependency on physical parameters, such as transmitter and receiver sizes, in their calculation to define the capacity of OAM channels.

Their experimental results confirmed that the DoF of a wireless communication link based on OAM beams is limited by its divergence and can be identified based on the paraxiality and orthogonality conditions. According to the research team, this novel approach is a generalized method of calculating the DoF of the wireless communication link which is limited by the divergence of the beam and physical size of the transmitter and receiver.

In addition to presenting the theoretical method of OAM wireless channel DoF analysis, the research team successfully completed the experimental verification of their theory, implemented in the E-band at 81–86 GHz. Using a 3D printed metamaterial slab, they also generated and demonstrated OAM modes, experimentally. The measurement and simulation results for the generated OAM beam were found to be consistent with the theory.

This study has been supported by the Samsung Research Funding Center of Samsung Electronics. The findings of this research have been published in the February 2021 issue of IEEE Wireless Communications Magazine.