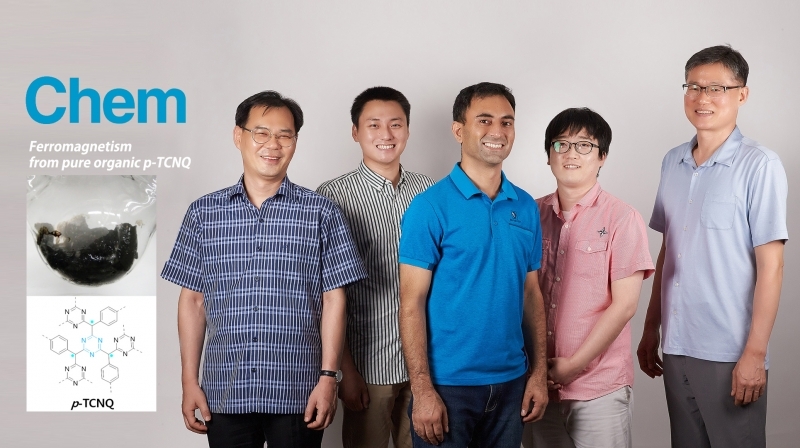 Organic Ferromagnetism: Trapping Spins in the Glassy State of an Organic Network Structure

Their findings published in the recent issue of the CHEM (Cell Press).

An international team of researchers, affiliated UNIST has introduced an exiting new organic network structure that shows pure organic ferromagnetic property at room temperature. As described in the CHEM Journal this pure organic material exhibits ferromagnetism from pure p-TCNQ without any metal contamination.

This breakthrough has been led by by Professor Jong-Beom Baek and his research team in the School of the Energy and Chemical Engineering at UNIST. In the study, the research team has synthesized a network structure from the self polymerization of tetracyanoquinodimethane (TCNQ) monomer. The designed organic network structure generates stable neutral radicals.

Change of Magnetic Moment with Respect to Annealing Temperature.

For over two decades, there has been widespread scepticism around claims of organic plastic ferromagnetism, mostly due to contamination by transition metals. Extensive effort has been devoted to developing magnets in purely organic compounds based on free radicals, driven by both scientific curiosity and the potential applications of a ‘plastic magnet’. Excluding the contamination issues and realizing magnetic properties from pure organic plastics must occur to revive the quest for plastic magnetism.

This research work reports the design, synthesis and magnetic properties of a triazine network structure demonstrating room-temperature ferromagnetism derived from pure organic material. The polymer network was realized through the self-polymerization of TCNQ in trifluoromethanesulfonic acid (TFMSA) at 155 °C . Highly stable free radicals are generated by twisting π bonds around the triazine rings and by trapping in the glassy state of a polymerized TCNQ (p-TCNQ) network structure. 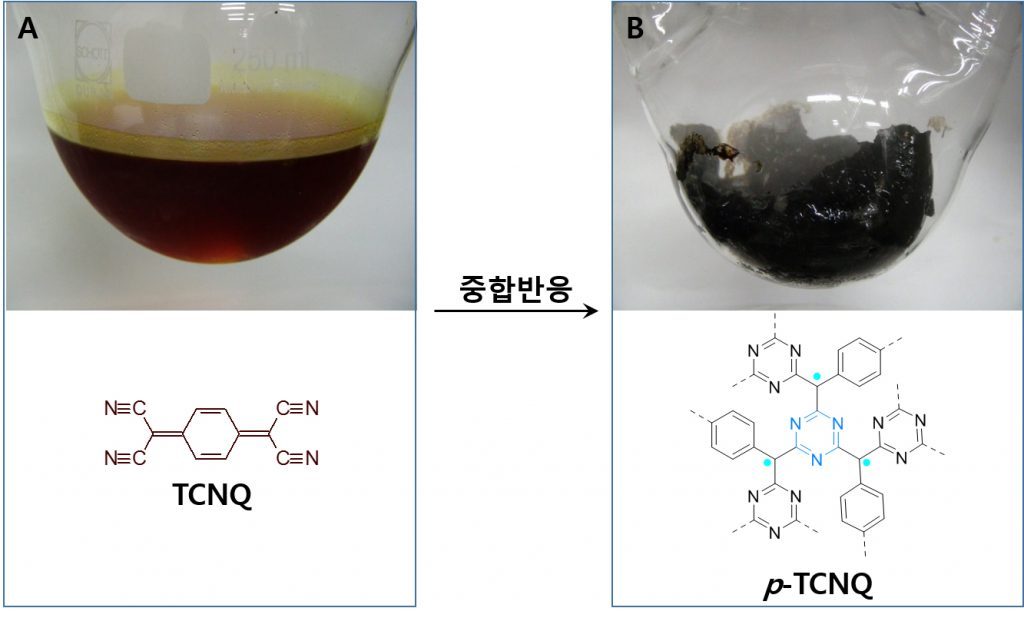 The presence of unpaired electrons (radicals) in the p-TCNQ was confirmed by solid-state electron spin resonance (ESR) spectroscopy and magnetic characterization revealed the presence of spin ½ moments, which leads to ferromagnetic ordering with a critical temperature significantly higher than room temperature. The experimental results were supported by rigorous theoretical calculation to verify the origin of organic ferromagnetism.

△ The Response of p-TCNQ Sample (Placed on Flat Styrofoam) toward External Magnet on Surface of Water.

“Our study not only suggests new directions in the organic magnetic materials, but also presents a wide range of possibilities for designing new structures with neutral stable radicals, which show ferromagnetic ordering,” says Professor Baek. “This material is expected to attract attention in many areas because of the scientific curiosity and the potential applications of plastic magnets.”

The research was supported with funds provided through the Creative Research Initiative, BK21 Plus, and Science Research Centre through the National Research Foundation (NRF) of Korea.