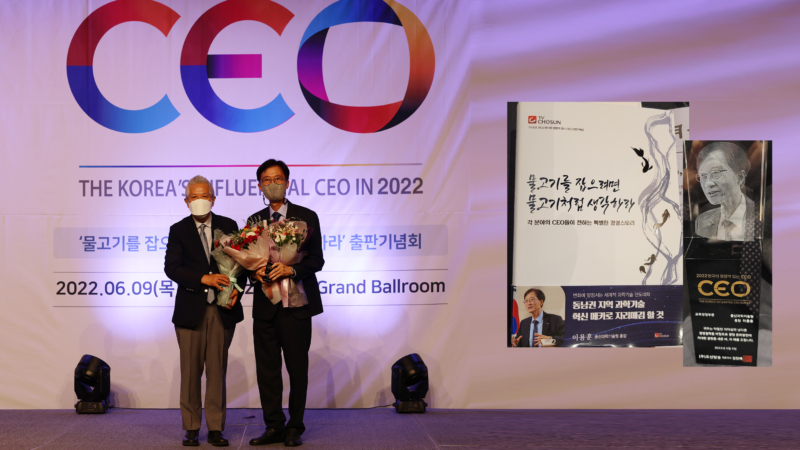 UNIST President Yong Hoon Lee has been named among Korea's most influential CEO in education management sector for 2022.

The award ceremony took place at the Plaza Hotel Seoul on Thursday, June 9, 2022.

UNIST President Yong Hoon Lee has been named among Korea’s most influential CEO in education management sector for 2022. The awards ceremony took place at the Plaza Hotel Seoul on Thursday, June 9, 2022.

The Korea’s Influential CEO is an annual event that selects and celebrates various eminent personalities who have greatly contributed to the advancement in selected industries or specific fields, and produces a book of their successful business cases. Organized by TV Chosun, the event has marked its 10th anniversary, this year.

President Lee has been selected as a recipient of the ‘Korea’s Influential CEO of the Year‘ award for 2022 in the education management sector in recognition of his outstanding contributions to scientific and technological innovation in the Southeastern Region by leading the innovation in science and engineering education.

Because science and engineering education seems stuck in the 1950s, President Lee judged that bold changes are needed to keep up with the rapidly changing pace of technological innovations. Accordingly, he has pushed for innovation in science and engineering education that provides quick access to the recent research trends, combined with hands-on, real-world experience. At its core, there are two main goals: Cultivating tech founders, like Google’s Larry Page and fostering world-class researchers whose influence is comparable to that of Nobel Prize recipients.

President Lee has also been pushing ahead with research in areas that are considered key research areas that will change our lives in future, which include artificial intelligence (AI), semiconductors, smart healthcare, and carbon neutrality. He believes that fostering those areas can not only increase university competitiveness, but also significantly boost innovation in local core industries. Group shot of the recipients of the ‘Korea’s Influential CEO of the Year’ Award for 2022. l Image Credit: TV Chosun