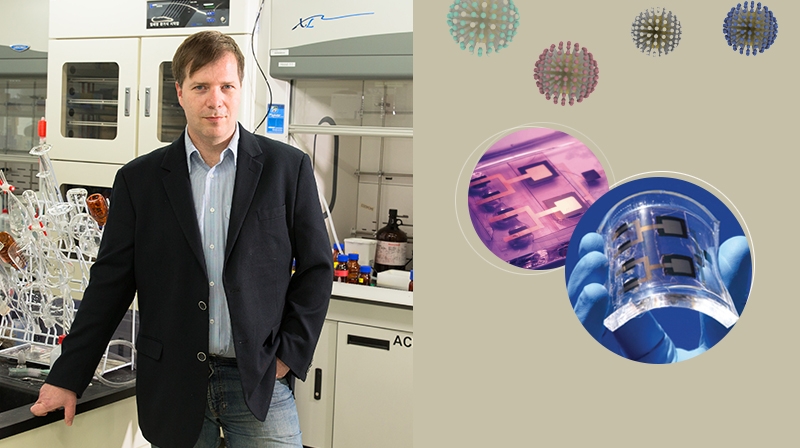 Prof. Grzybowski Bartosz (School of Natural Science) is posing for a portrait in his lab at UNIST. What is shown on the right is ligand-coated gold nanoparticles.

Producing Electronics without Semiconductor is Now a Reality

Nanoparticle Diodes and Devices That Work When Wet.

A new study by an international team of researchers, affiliated with UNIST has found a new way to produce electronic devices, such as diodes, logic gates, and sensors without the need of semiconductors.

In their study, published in the current edition of Nano Technology, the team reported that they used metal nanoparticles, coated with charged organic ligands to create versatile electronic circuits, which they have named “chemoelectronic” circuits.

According to the research team, led by Prof. Bartosz Grzybowski (school of Natural Science) of UNIST, this newly developed nanoparticle diodes and devices are durable enough to withstand in salty, aqueous environments and flexible enough to be operated even under significant bending, thereby overcoming the limitations of the present semiconductor technology.

In the study, the team engineered the chemoelectronic devices by coating gold nanoparticles with any of four types of organic molecules, called ligands. Each ligand produces a different, charge-related effect when put in water or a humid environment. One dissolved, releasing a positive ion and leaving the nanoparticle surrounded in negative charge. Another had the opposite effect, making the nanoparticle positive and releasing a negative ion.

This study was jointly conducted by Prof. Bartosz Grzybowski (school of Natural Science) of UNIST, Prof. Yong Yan of the National Center for Nanoscience and Technology in Beijing, Prof. Scott. C Warren of the University of North Carolina at Chapel Hill, and Mr. Patrick Fuller from United States-based company NuMat Technologies.

The following is an interview with Prof. Bartosz Grzybowski (School of Electrical & Computer Engineering):

A. There is indeed much work on wearable electronics, as well as “implantable” electronics. If I were to choose the leader in this effort, it is John A. Rogers at UIUC. However, at the heart of these technologies are, generally, silicon-based semiconductors and cannot really function when wet. Part of our motivation was to develop a system that can function when wet and is also not toxic — nanoparticles such as Au or Ag meet the non-toxicity condition and so we used them as a basis. Then, the big conceptual thing was how to build electronic components from such metals — they do not have a band-gap like semiconductors, so it might look impossible. But, if one puts these charged groups on the nanoparticles, the counterions around them effectively serve the role of the “p” or “n” carrier in semiconductors. This is quite a radical departure from how we typically think for electronic devices.

A. I like the idea of continuous monitoring of the human body, but I also see bunch of ethical problems there, mostly regarding privacy issues. But if we could get better and develop more biocompatible products and devices to monitor patients’ hearts and kidneys, many people will live longer and have better lives. So ultimately I think that should be the future direction for wearable technology.