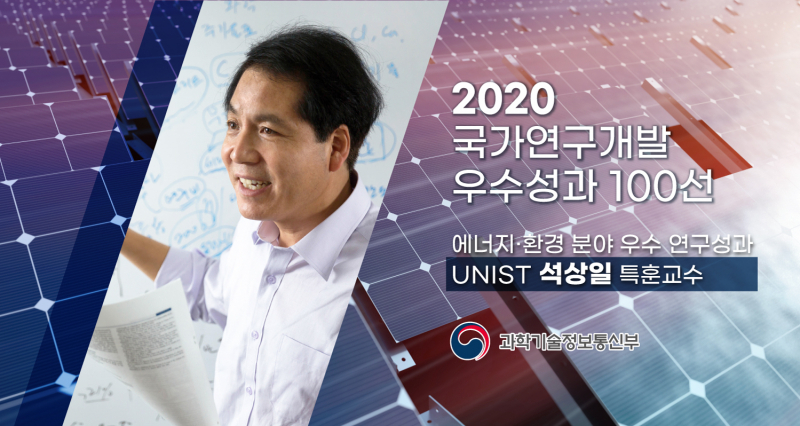 A recent breakthrough by Distinguished Professor Sang Il Seok (School of Energy and Chemical Engineering) has been name among the 2020 National Top 100 R&D Performances.

Every year, the Korean Ministry of Science and ICT (MSIT) selects and announces the nation’s top 100 outstanding research performances to inspire an interest of the general public in science and technology.

A recent breakthrough by Distinguished Professor Sang Il Seok (School of Energy and Chemical Engineering) has been name among the 2020 National Top 100 R&D Performances. He received this honor in recognition of his pioneering contributions to the advancement of next-generation perovskite solar cells (PSCs).

Distinguished Professor Seok has been given this honor in recognition of this breakthrough research that develops novel materials for stable PSCs, capable of absorbing a wide range of sunlight. In his work, Distinguished Professor Seok has engineered the light-absorbing layer material with the new composition of perovskite material and applied it to the solar cell. By simply changing their additives, the new material has significantly increased both efficiency and stability of the existing perovskite solar cells. With this, the commercialization of perovskite solar cells, which have been attracted much attention as the next-generation solar cells, could be accelerated.

In addition, Distinguished Professor Seok and his research team published research that could further improve both the efficiency and the stability of PSCs by minimizing the deformation for the microstructure of the photoactive layer in the existing PSC devices. Published in the October 2020 issue of Science, their findings have attracted attention as a method to further improve both the efficiency and stability of PSCs.

Since 2006, MSIT has been nominating top 100 outstanding research performances every year to inspire an interest of the general public in science and technology. For this year, out of 70,000 latest breaking government-funded R&D projects, the selection committee has shortened the list to a total of 100 outstanding R&D performances.

Outcomes selected for excellence will be awarded with certificates and signboards from the Minister of Science and ICT (MSIT), thus will be given advantage points in the upcoming institutional/organizational performance assessment in accordance with the relevant regulations. Besides, these R&D breakthroughs will be published into a casebook and distributed, later on. The researchers of the selected R&D outcomes will be selected as the potential candidates for the National R&D Performance Awards and receive a merit award for outstanding work.