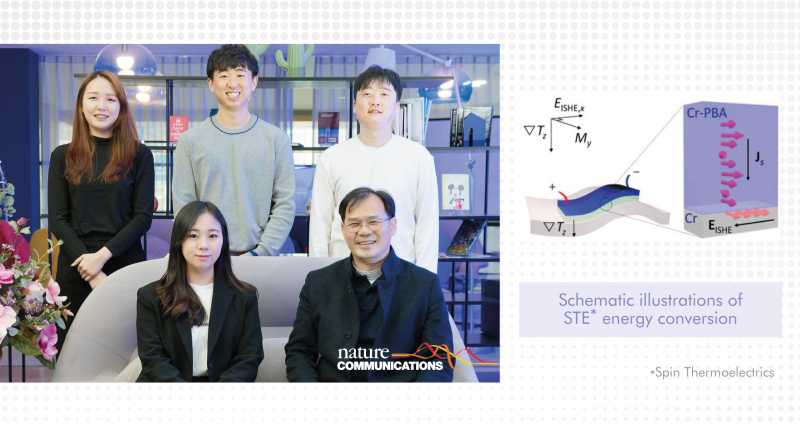 A research team, led by Professor Jung-Woo Yoo in the Department of Materials Science and Engineering at UNIST has unveiled a new class of magnetic materials for spin caloritronics.

Their findings have been published in the February 2021 issue of Nature Communications.

A team of researchers, affiliated with UNIST has recently introduced a new class of magnetic materials for spin caloritronics. Published in the February 2021 issue of Nature Communications, the demonstrated STE applications of a new class of magnets will pave the way for versatile recycling of ubiquitous waste heat. This breakthrough has been led by Professor Jung-Woo Yoo and his research team in the Department of Materials Science and Engineering at UNIST.

Spin thermoelectrics is an emerging thermoelectric technology that offers energy harvesting from waste heat. This has attracted substantial research interest with the potential advantages of scalability and energy conversion efficiency, thanks to orthogonal paths for heat and charge flow. However, magnetic insulators previously used for spin thermoelectrics pose challenges for scale-up due to high-temperature processing and difficulty in large-area deposition, noted the research team.

Figure 1. STE coating and characteristics of the Cr-PBA thin films. (Left) Schematic illustrations of STE energy conversion upon the vertical temperature gradient (∇Tz) and the mechanism of LSSE associated with thermally generated magnons and their conversion into a charge current via the ISHE. (Middle) Sketch of the ECD set-up for the Cr-PBA coating using a Cr thin film (10 nm) as a working electrode (WE), Pt counter electrode (C), and Ag/AgCl reference cell (R). (Right) ΔVLSSE as a function of the estimated ΔT in a Cr-PBA film displaying a linear behavior.

In this study, the research team introduced a molecule-based magnet, Cr-PBA, as an alternative magnetic insulator for the magnon-mediated thermal-to-electrical energy conversion. According to the research team, the studied molecular magnetic film has several advantageous characteristics over inorganic magnetic insulators in terms of spin TE (STE) applications. Indeed, it entails versatile synthetic routes amenable for large area deposition at room temperature, in addition to weak spin-lattice interaction and low thermal conductivity. 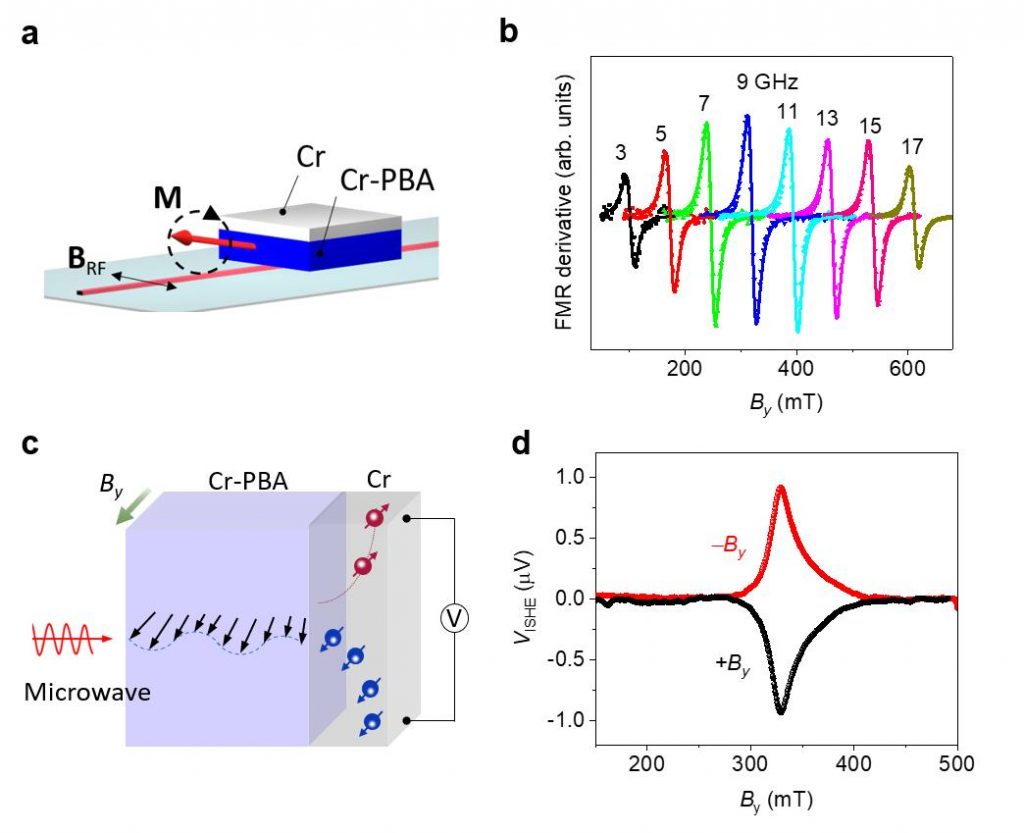 According to the research team, various other methodologies, such as painting and printing, can be also utilized for developing the PBA film. They also noted that the generation and transfer of magnons are essential processes for STE energy harvesting, as well as magnon information technology. Experimental results also indicated that the excitations of low-energy magnons in this class of magnet were much stronger than those in the typical inorganic magnets. Besides, the ferromagnetic resonance studies exhibited an extremely low Gilbert damping constant, which indicates a low loss of heat-generated magnons. Furthermore, the determined low thermal conductivity in the studied molecule-based magnetic film is an accessory benefit for STE energy harvesting because it assists in maintaining a higher temperature gradient across the film, noted the research team.

“Our study shows excitations and transfers of magnons in this hybrid magnet are very efficient, suggesting molecule-based magnets, along with their synthetic versatility, could be outstanding alternatives for various applications of spin caloritronics as well as magnon spintronics,” said the research team.

The findings of this research have been published in the February 2021 issue of Nature Communications. This study has been jointly participated by Professor Joonki Suh (Department of Materials Science and Engineering, UNIST), Professor Byoung-Chul Min (Korea Institute of Science and Technology, KIST), and two graduates from UNIST’s Department of Materials Science and Engineering – Dr. Jungmin Park (KBSI) and Professor Mi-Jin Jin (Dankook University).