Professor Jong Bhak in the School of Life Science at UNIST.

Mass Eurasian migration back into Africa, revealed by 4500-year-old skeleton

An international team of researchers, affiliated with UNIST has recently announced that they have successfully extracted and sequenced DNA from a 4,500 year-old Ethiopian skull found in highlands in Ethiopia. The findings, published in the October 8th issue of journal Science, suggest that there was a huge migratory wave of Eurasians into Africa around 3,000 years ago, reshaping the story of ancient human history. 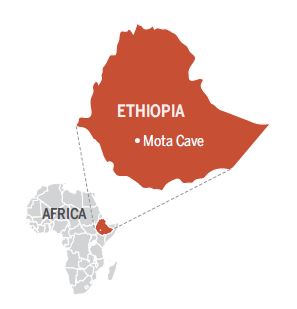 Photo Credit: © 2015 American Association for the Advancement of Science.

This study was jointly conducted by an international team of researchers, including Dr. Andrea Manica, senior author of the study from the University of Cambridge’s Department of Zoology with permission from the Ethiopia’s Ministry of Culture and Authority for Research and Conservation of Cultural Heritage. Sequencing was done by Dr. Jong Bhak (School of Life Science), founding director of Genome Research Foundation at UNIST.

The genome was taken from the ancient skeleton of a hunter-gatherer man buried 4,500 years ago in a cave, called Mota in the highlands of Ethiopia. According to the team, “Because the body has been buried in cool, arid conditions, his DNA could endure for thousands of years.”

Previously, ancient genome analysis has been limited to samples from northern and arctic regions due to the fragile nature of human remains in hot climates and this is the first time an ancient human genome is being sequenced from Africa.

In this study, the team was able to discover that Mota, as the scientists refer to the man, had no trace of Eurasian DNA in his genome. Moreover, he also shows genetic adaptations for living at altitude, and a lack of genes for lactose tolerance – all genetic traits found in Ethiopian highlanders today. That meant Mota lived before Eurasians returned to the African continent.

According to Dr. Bhak, “This study raises hopes that scientists can recover far older human genomes from Africa, thereby enabling us to gain a clear understanding of who our earliest ancestors were.”