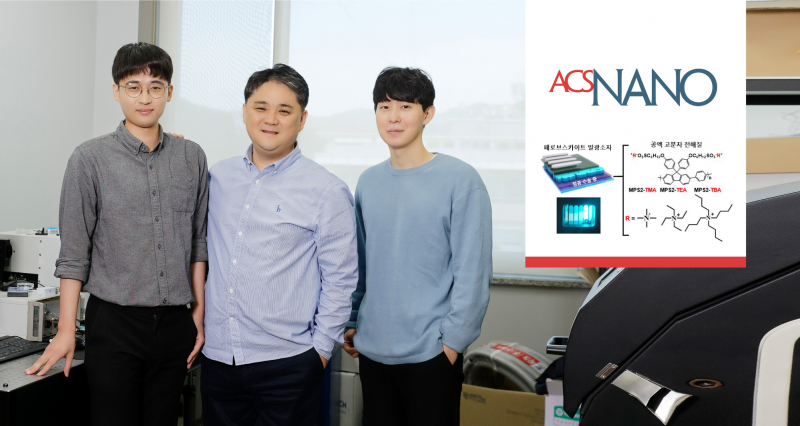 A joint research team, led by Professors Myoung Hoon Song and Sang Kyu Kwak in the Department of Materials Science and Engineering at UNIST has introduced sky-blue-emissive PeLEDs with significantly improved luminance efficiency and spectral stability.

Their findings have been published in ACS Nano on September 10, 2020.

A joint research team, affiliated with UNIST has recently unveiled the sky-blue-emissive perovskite light-emitting diodes (PeLEDs). The newly-reported PeLEDs have shown high color purity with significantly improved luminance efficiency and spectral stability. Published in the September 2020 issue of ACS Nano, this breakthrough has been carried out by Professor Myoung Hoon Song and Professor Sang Kyu Kwak in the Department of Materials Science and Engineering at UNIST, in collaboration with Professor Han Young Woo from Korea University.

A light-emitting device (LED) is a semiconductor device that emits light when an electric current is passed through it. LEDs are often used as a light source in liquid crystal displays, such as in TVs and mobile phones. PeLEDs, which use perovskite as a light source, have been attracting attention as a next-generation display material owing to its advantage of low cost and excellent color purity.

However, in the case of blue-emissive PeLEDs, they consume an enormous amount of power because only 10% of the electrical energy could be converted to light, which is less than half the energy conversion efficiency of green- and red-emissive PeLEDs. An additional problem with this is that the color purity also decreases over time due to the ions added to realize color-stable blue PeLEDs.

The research team used a groundbreaking method to improve the performance of PeLEDs by changing the properties of the interface between the hole transport layers (HTLs) and the perovskite films. When the newly synthesized organic material was used as HTLs, the efficiency improved by 3 to 4 times compared to the existing light-emitting device. Besides, the electroluminescence (EL) spectra, an index indicating color purity, was greatly stabilized, according to the research team.

Figure 1. Images of the sky-blue emissive perovskite LED and the chemical structures of conjugated polyelectrolytes (CPEs).

In the study, the research team used the conjugated polyelectrolytes (CPEs) as HTLs in PeLEDs in place of PEDOT:PSS. This has effectively reduced the interfacial defects and enabled more crystalline perovskite crystal growth, resulting in enhanced luminance efficiency and spectral stability.

The findings of this research have been published in the September 2020 issue of ACS Nano. This study has been supported by the Mid-career Researcher Program through the National Research Foundation of Korea (NRF), funded by the Ministry of Science and ICT (MSIT), as well the Basic Research Laboratory (BRL) and the LGD-Korea University Incubation Program.