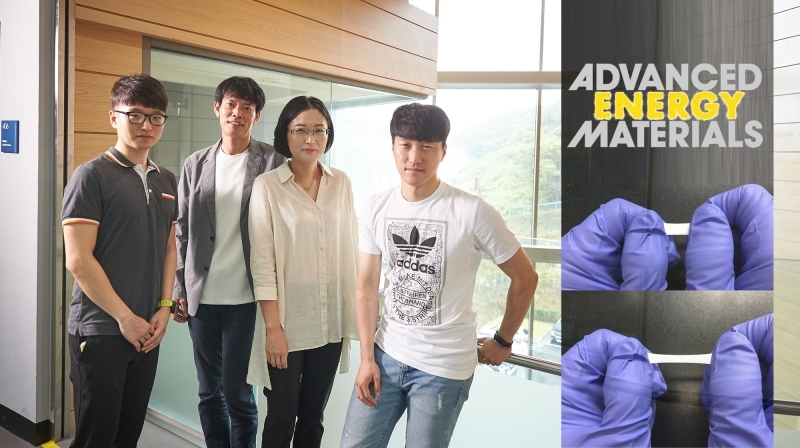 From left are Myoungsoo Shin, Professor Soojin Park, Professor Nam‐Soon Choi, and Woo-Jin Song in the School of Energy and Chemical Engineering at UNIST.

Rubberlike Separator Membrane for the Realization of Deformable Batteries

Their findings have been published in Advanced Energy Materials.

A recent study, affiliated with UNIST has introduced a novel technique to develop a rubberlike stretchable battery. This is the first attempt to stretch the battery separator, positioned between the anode and the cathode.

This study has been jointly led by Professor Soojin Park, Professor Nam-Soon Choi, and their research teams in the School of Energy and Chemical Engineering at UNIST. The researchers have developed highly stretchable separator membranes for deformable energy devices.

The seperator, one of the critical components of a battery, is a porous insulating membrane, placed between the cathode and the anode. Its roles are to prevent their direct electrical contact and ensure sufficient ionic conductivity between the electrodes via the electrolyte present in the pores of the seperator.

Previous studies on stretchable batteries focused on the systematic deformation in electrode materials for Li-ion batteries. However, because these batteries use gel polymer electrolyte membrane or non-woven fabric types, manufacturing of such separators is a technically complicated and costly process. In coping with such issue, Professor Park and Professor Choi came up with a simple and inexpensive way to develop the separation membranes.

In the study, the team used styrene-butadiene-styrene (SBS) rubber for the preparation of highly stretchable separation membranes to ensure stretchability. Then, they used the non-solvent induced phase transition method (NIPS) to ensure neat, uniform holes. The new stretchable separator membrane operated normally when placed within the existing LIBs and exhibited a high stretchability of around 270% strain and porous structure having porosity of 61%. 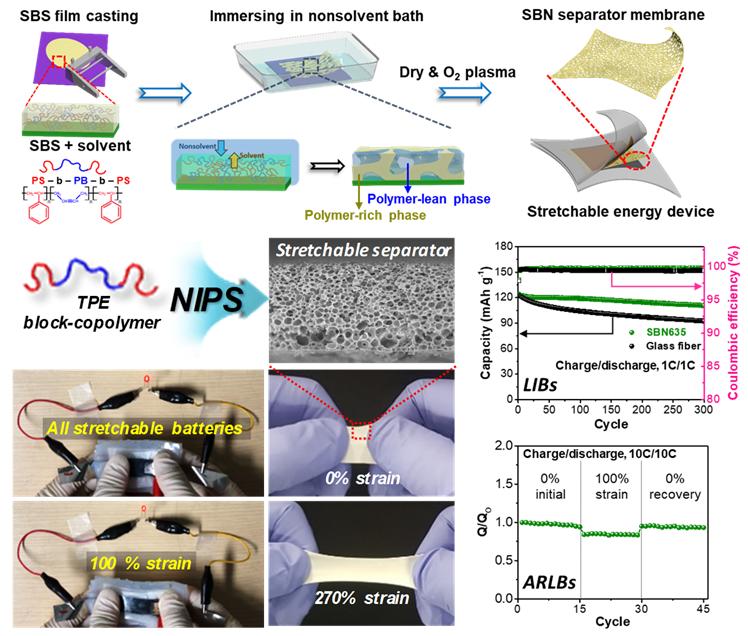 In addition, SBS rubbers, due to their inherent properties, dissolve well in some solvents and not in others. If other solvents are mixed in a solvent that dissolves the SBS rubber, a porous structure is formed when the solvent evaporates. Solvents that do not melt well in the SBS rubber are trapped between them to form holes.

“Rubber materials interact with various solvents to create different porous structures,” says Myoungsoo Shin in the School of Energy and Chemical Engineering at UNIST, the first author of the study. “As a result, they have a porous structure that is well suited to battery separators and can maintain a stretchable stretch like rubber.”

“The phase transition method can be applied to various polymers, and it has been attempted for the first time to manufacture an elongated separator for a battery,” says Woo-Jin Song, another first author of the study. “By adjusting materials, solvents, phase transition conditions, etc., desired characteristics can be created.”

Researchers also applied the newly-developed rubberlike separators to the existing organic electrolyte based LIBs. As a result, the membrane functioned well even when it was normal and increased more than 2 times. In addition, the battery performance has been improved when applied to water-based electrolyte-based lithium ion batteries without explosive risks.

“This study proved that the new separator can be applied not only to organic electrolyte–based rechargeable lithium‐ion batteries, but also to aqueous electrolyte-based Li-ion systems,” says Professor Choi. “It will be also applicable for the battery systems that mainly use gel polymer electrolytes.”

This study was supported by the Center for Advanced Soft Electronics (CASE) of Global Frontier Project, funded by the Ministry of Science and ICT. The findings of this work have been published in the prestigious journal, Advanced Energy Materials on June 21, 2018.