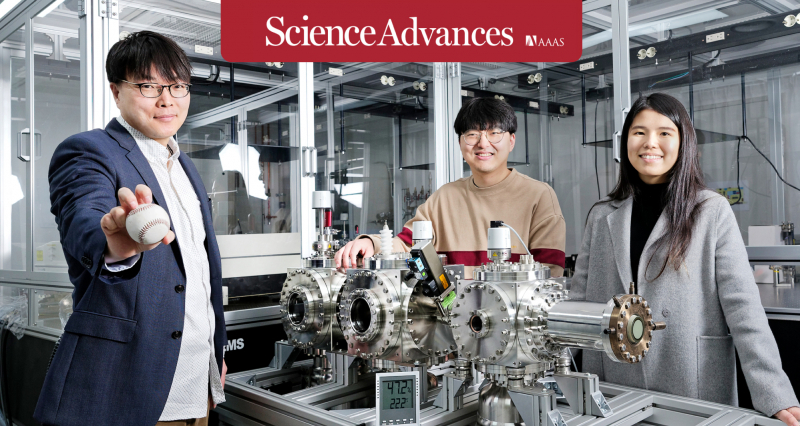 A research team, led by Professor Bum Suk Zhao in the School of Natural Science at UNIST has discovered that when the rotational quantum states of non-polar molecules change under the influence of laser fields (non-resonant laser fields), so does their motion trajectories.

Their findings have been published in Science Advances on April 3, 2020.

Baseball pitchers throw a variety of pitches, each of which has a slightly different trajectory. This is because each pitch type depends on the degree of interaction with the air flowing around the ball. A recent study, affiliated UNIST has unveiled that even small invisible molecules have different motion trajectories for each rotational state when interacting with the laser.

A research team, led by Professor Bum Suk Zhao in the School of Natural Science at UNIST has discovered that when the rotational quantum states of non-polar molecules change under the influence of laser fields (non-resonant laser fields), so does their motion trajectories. Like baseball pitching, the alignment degree of molecules varies according to the rotational quantum states, which brings significant changes to the trajectories of molecules.

Molecules rotate freely in each rotational quantum state when there is no laser field present. However, when those initially freely rotating molecules interact with a laser field, a change occurs. Thus, in the presence of a laser field, even a non-polar molecule experiences induced dipole moment, and such degree varies depending on the rotational quantum state. These molecules are aligned in a specific direction (the laser polarization direction) and at the same time, the translational motions (forward movement) of molecules change by interacting with the laser field.

Figure 1. The schematic diagram of the experimental setup.

“In the paper, published in Physical Review Letters in 2015, there was something that could not be explained by the “polarization rate that varies with each rotational quantum state,” says Lee Young Kim (Combined M.S/Ph.D. of Physics, UNIST), as the first author of the study. “This time, through an accurate assessment of polarization rate, taking into account the alignment effect, it was possible to successfully interpret the scattering experiments.”

“The accurate investigation of the scattering of aligned molecules through laser fields can be the cornerstone of controlling translational molecular motions, as well as for the development of technology that can separate non-polar molecules according to their rotational state,” says Professor Zhao. “This study will serve as the basis for further research, such as separation of isomers distributed in different quantum states, as well as for the investigation of reaction dynamics.”

The findings of this research have been published in Science Advances on April 3, 2020. This work has been supported by the Basic Science Institute Research Fund of UNIST and the National Research Foundation of Korea (NRF) via the Individual Basic Science and Engineering Research Program, Global Ph.D. Fellowship (GPF), and the Mid-career researcher program.