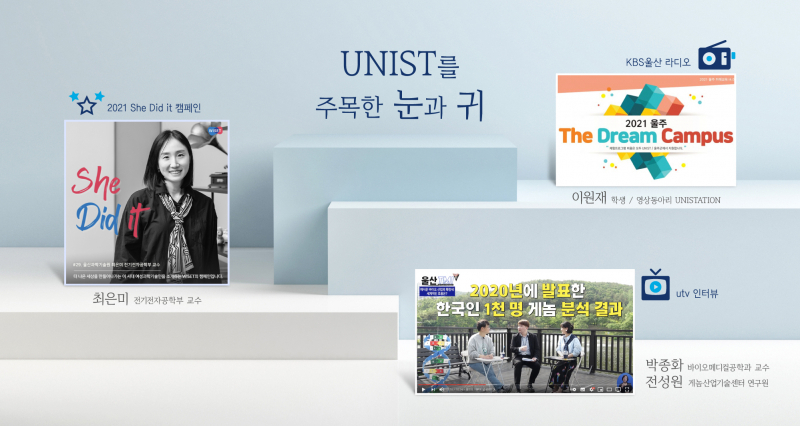 《Editor’s Note: UNIST has attracted much attention recently, as its name was mentioned in the media through the inspiring stories of its students and faculty. Through this, UNIST had an excellent opportunity to expose itself to the international media and those who have little or no interest in science and technology. Here is a brief summary of those inspiring stories.》

■ Professor EunMi Choi Appeared in ‘2021 She Did It’ Campaign by WISET!

EunMi Choi, Professor of Electrical Engineering at UNIST was recently featured in a new campaign by the Center for Women in Science, Engineering, and Technology (WISET). This campaign, entitled ‘She Did It’ celebrates women who have carved a niche for themselves in the field of science. Professor Choi was introduced as the 29th female scientist who shaped the field of science through her hard work and determination. The interview with Professor Choi can be found in the link below.

UNIST Leadership Center, in conjunction with Ulju County, has implemented the Ulju Dream Campus project. This project, which is being promoted as part of the Ulju Future Education Industry 4.0 (i4.0) Campus, offers various hands-on science activities and community services through mentoring programs that links middle school students in Ulju County with UNIST students.

A local radio broadcasting station paid attention to this meaningful commitment. On May 25, the KBS Ulsan Broadcasting Station talked about this project in detail through its own channel ‘Radio World, Inside Ulsan.’ It also featured the story of WonJae Lee (Department of Biological Sciences, UNIST) who is a member of  UNISTATION, a student video club of UNIST.

On May 26, UNIST held a declaration ceremony to commemorate the successful completion of the Ulsan 10,000 Genome Project, which was initiated in 2016 as part of the Genome Korea in Ulsan Project launched in 2015. Since this was the first large-scale genome project, ever held in Ulsan, the project has generated much attention, locally and internationally.

This has aroused wide public interest in Ulsan, particularly in the field of genomics. Professor Jong Bhak in the Department of Biomedical Engineering at UNIST and his researcher Sungwon Jeon from Korea Genomics Center (KOGIC) came forward to satisfy their curiosity via a YouTube channel, run by Ulsan Daily Newspaper, which brings the latest news headlines about Ulsan city. For more details, please refer to the links below: