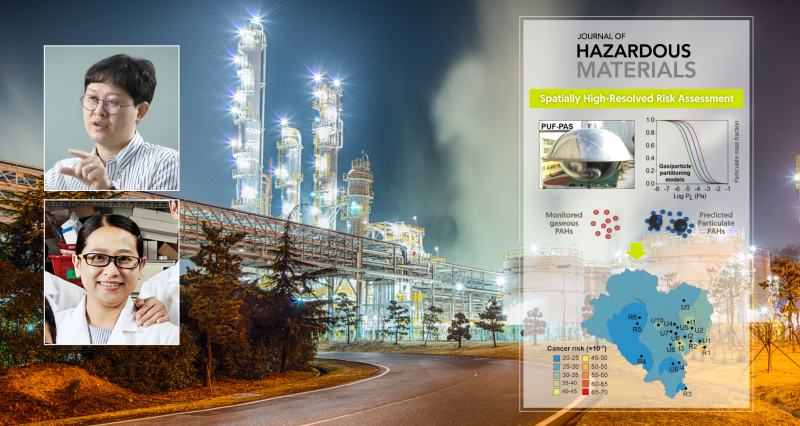 Their findings have been published in the online version of Journal of Hazardous Materials.

A novel technology that can accurately estimate the human health risks via the prediction of the concentration of hazardous substances contained in fine dust particles has been developed. With the introduction of new technique, it will become much affordable and easy to carry out risk assessment for atmospheric pollutants within a specific area.

A research team, led by Professor Sung-Deuk Choi in the School of Urban and Environmental Engineering at UNIST has proposed a new approach for the highly spatially resolved human health risk assessment of both gaseous and particulate polycyclic aromatic hydrocarbons (PAHs). They combined the actual atmospheric samples with computer modeling to generate ‘high-resolution air pollution concentration maps’ and ‘human health risk maps’ with regard to atmospheric PAHs in Ulsan.

Polycyclic aromatic hydrocarbons (PAHs) are derived from the incomplete combustion of fossil fuels and biomass burning. A typical PAH is benzopyrene, which exhibits a strong carcinogenic potential and it is classified as a carcinogen to humans. PAHs are a group of semi-volatile organic compounds (SVOCs) that present in both gaseous and particulate forms. Within air pollutants, particle matter are more dangerous than gaseous contaminants because they can get deep into your respiratory tract and increase the risk of disorders. However, the existing passive air samplers (PASs) are mainly designed to capture gaseous pollutants. Therefore, there are certainly limits to monitoring and assessment of particulate matter and PAHs, as well as estimation of human health risks.

Passive air samplers (PASs) are simple and cost-effective tools to collect and analyze gaseous pollutants, yet it has been difficult to trace particulate contaminants. The team compensated for the shortcomings of the existing PASs, using ‘gas/particle partitioning modesl’. According to the research team, this process is cost-effective and has the potential to increase the spatial resolution to scales of less than 0.1 km, i.e., buildings and intersections.

In this study, the city of Ulsan, South Korea’s largest industrial city, was selected as the study area for the passive air sampling of PAHs. In particular, PAHs were monitored at 20 sites in semi-rural, urban, and industrial areas of Ulsan for one year. Gaseous PAHs collected using polyurethane foam-based passive air samplers (PUF-PASs) and particulate PAHs predicted using gas/particle partitioning models were used to estimate the human health risks. Their results showed that the concentration of PAHs and human health risks were highest in industrial complexes and at the major roadsides of Ulsan.

Although the average human health risk was below the standard, suggested by the U.S. Environmental Protection Agency, continuous monitoring would be necessary as it may exceed the standard rates, particularly in areas exposed to high concentrations of hazardous substances, such as industrial complexes.

“This study suggests that human health risks can be cost-effectively mapped on a local scale using passive air sampling,” says Professor Choi. “In particular, for those who live in places with way more air pollution could be more vulnerable, the effects of pollution on health of residents can be even effectively evaluated.” He adds, “With the use of ‘monitoring-modeling’ convergence technology, we hope to trace the causes and sources of toxic organic substances, other than PAHs.”

The findings of this research have been published in the online version of Journal of Hazardous Materials and will be published on July 5, 2020. This study has been supported by the National Research Foundation of Korea (NRF).