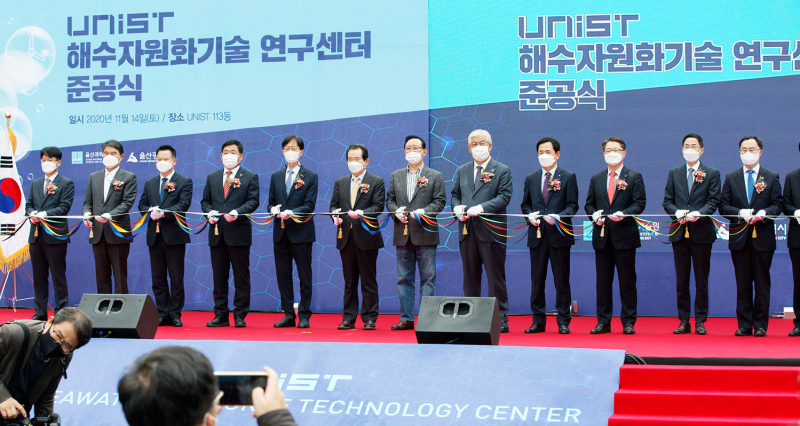 The ceremony to mark the opening of the Seawater Resources Technology Research Center took place on November 14, 2020.

The ceremony to mark the opening of the new research center took place on November 14, 2020.

On November 14, UNIST held a ceremony to mark the official launch of the Seawater Resources Technology Research Center. This center is expected to serve as a renewable energy research outpost that would give the lead in bringing the Green New Deal to Ulsan.

The new research center, which began construction in March 2019, comprises five floors and a basement with a gross floor area of approximately 5,443 square meters. A total of 18.4 billion KRW has been invested in the construction. 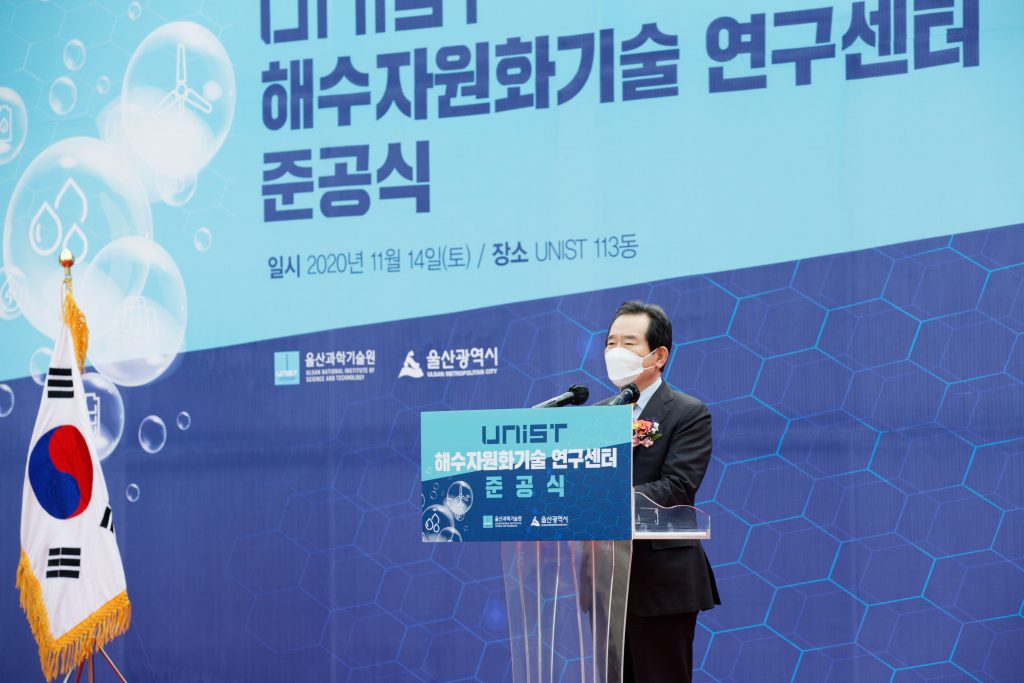 The Seawater Resources Technology Research Center aims to carry out various research projects on seawater batteries that use earth-abundant seawater (sodium) to generate electricity. These batteries are much cheaper and more environmentally friendly than lithium, and thus will offer a low-cost route to large-scale energy storage. This makes this system an attractive supplement to existing battery technologies, thus leading the energy storage system (ESS) market.

The center will be carrying out research on seawater batteries, and this includes the study of the many additional functions of seawater batteries. Researchers have confirmed that seawater desalination, sterilization, hydrogen production, and carbon dioxide capture are possible during the charging and discharging process. They are now putting work into turning their research findings into real-world applications.

The new research center comprises five floors and a basement with a gross floor area of approximately 5,443 square meters.

Since the successful development of world’s first seawater batteries in 2014, Professor Youngsik Kim (School of Energy and Chemical Engineering) at UNIST has been continuously carrying out relevant research to offer a low-cost energy storage system (ESS). Professor Kim and his research team have secured 5 billion KRW in funding from Korea Electric Power Corporation (KEPCO) and Korea East-West Power Company (EWP) and has been cooperating with the Korea Institute of Ocean Science & Technology (KIOST) to develop a range of application technologies for seawater batteries using UNIST’s seawater bettery technology. Besides, in May 2020, the center has been selected as the 2020 Community Vitality Project by the Ministry of Trade, Industry and Energy (MOTIE), and thus has been carrying out seawater battery-based regional vitality projects in collaboration with local enterprises in Ulsan.