Bill for the status change of UNIST passed in the National Assembly plenary session.

President Geun-hye Park has 15 days to decide the measure's fate.

The law for the status change of UNIST has finally been approved by the National Assembly with only four dissenting votes on Tuesday, March 3, 2015. This would bring UNIST to range with three other Korea’s S&T Research Institutes, KAIST, GIST, and DGIST.

President Geun-hye Park has 15 days to decide the measure’s fate. Once the President signs the bill into public law, the Ministry of Science, ICT, Future Planning of the Republic of Korea needs to establish the Preparation Committee for UNIST within a three month period.

Members of this Preparation Committee will be appointed by the Minister of the Science, ICT and Future Planning upon the approval of the National Assembly.

This Preparation Committee will launch a movement in April and will be discussing all the matters related to the law for the status change of UNIST for the next three months. Once this process is completed smoothly, UNIST will reborn as one of Korea’s Science and Technology research Institutes under a special law with government funding in the latter half of this year. 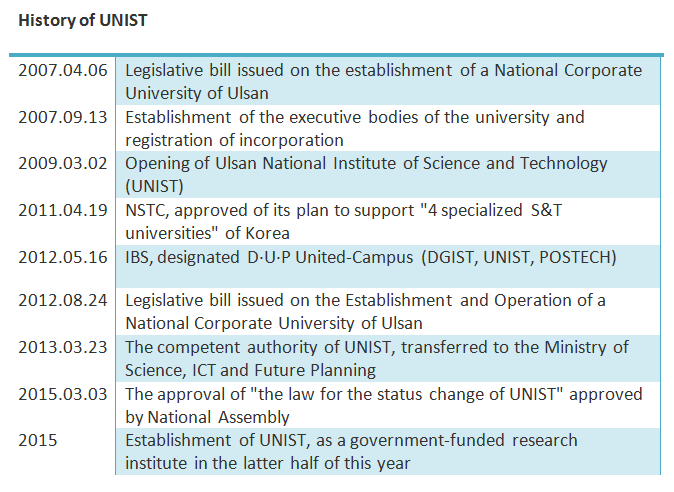