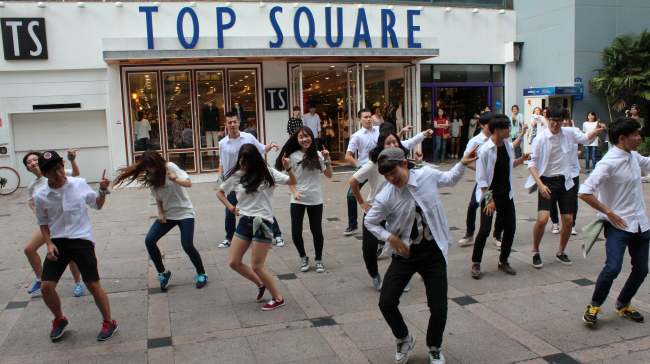 A group of UNIST students gathered to celebrate the school's 6th anniversary in a fun and creative way using "Flash Mobs".

“Serving as a member of UNIST is an extreme priviledge.”

Upbeat music and a mob of dancing feet are amongst the attractions on offer as UNIST celebrates its 6th anniversary.

As the tune of a K-pop song, “Shake it” rang out from Young Street in Seongnam-dong, a group of students suddenly broke into a spontaneous dance routine, springing a surprise on downtown passers-by. The gang took centre stage for five minutes, followed by street performance by UNIST music clubs, “Pitch High” and “Epidemic.”

The idea originated early this month, when a UNIST student Young Jae Kim (Business Administration) came up with this creative way to promote UNIST while commemorating its 6th anniversary.

“We thought of other ways of celebrating it, but we wanted to make it a fun and memorable experience for everyone,” says Young Jae. 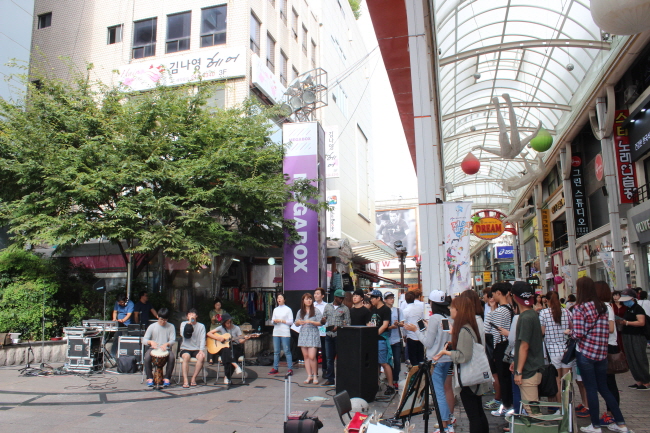 A mini busking concert next to “Flash Mob” performance was held to attract more people to the event.

This festive entertainment on Saturday afternoon marked the culmination of numerous rehearsals in the past two weeks. Despite the busy school schedules, along with this year’s Korean Thanksgiving holiday, a group of 50 young and enthusiastic students partook in this event. For their efforts, they were greeted by the cheers of an ecstatic crowd and had a chance to spread knowledge about the University.

“The admissions office is doing a great job of promoting UNIST, but with a busy schedule, it can be difficult to stay connected with everyone in person,” says Soo Yong Kim (Business Administration). For this event, Soo Yong published a two-page school brochure to be distributed to the public.

“We challenged ourselves to use “flash mobs” with a purpose to show our love and support for UNIST, along with the school brochures we have available – together we produced some great work,” said Soo Yong.