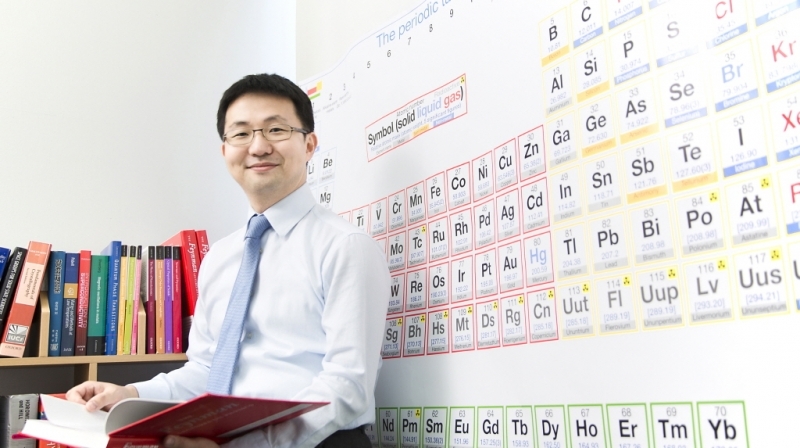 Prof. Yoon-Seok Oh (School of Natural Science) poses for a portrait in his office at UNIST.

On January 13, a team of researchers, headed by Professor Yoon-Seok Oh (School of Natural Science) announced that they have successfully developed a technology to make a new functional ferroelectric material that could prove to be very useful in developing new methods of creating computer memory.

“We aim to go beyond those limitations that the current semiconductor memory technologies are facing with and we believe that this newly-developed material will become an important element of next-generation memory devices,” says Prof. Oh.

The advantage of ferroelectrics

Ferroelectric materials exhibit spontaneous electric polarization as a result of small shifts of negative and positive charges within the material. The polarization can be reversed when an external electric charge is applied to ferroelectrics. These two possible polarization orientations make ferroelectric an attractive material for energy-efficient non-volatile memory, which is unaffected by power outages.

Generally, ferroelectric bits of information are processed in a vertical direction and this has reduced the performance speed for mordern computers. However, thanks to new research, led by scientists at UNIST and Rutgers Unviersity, the polarization of this newly-developed material occurs horizontally. This allows electricity to flow alongside the boundary interface of the same polarity, which is narrower than one nanometer. Thus, electric circuits of a narrower width devices can contribute to high-performance memory technologies.

This study was collaboration among researchers, including Prof. Oh at UNIST and Prof. Sang-Wook Jung at the University of Rutgers. In this study, the research team was able to successfully develop new stable hybrid improper ferroelectricity where calcium, storntium, titanium, and oxygen are arranged in an ordered network—order that is needed for a material to be ferroelectric. This new class of memory technology, so called “Ferroelectronics” will bring down the cost of cloud computing and other electronic devices.

The findings of this study has been featured in the Jan. 12, 2015 issue of Nature Materials, a Nature-branded sister journal. The impact factor for Nature Materials in the past five years was significantly higher than Nature, one of the world’s most restigious scientific research journals.