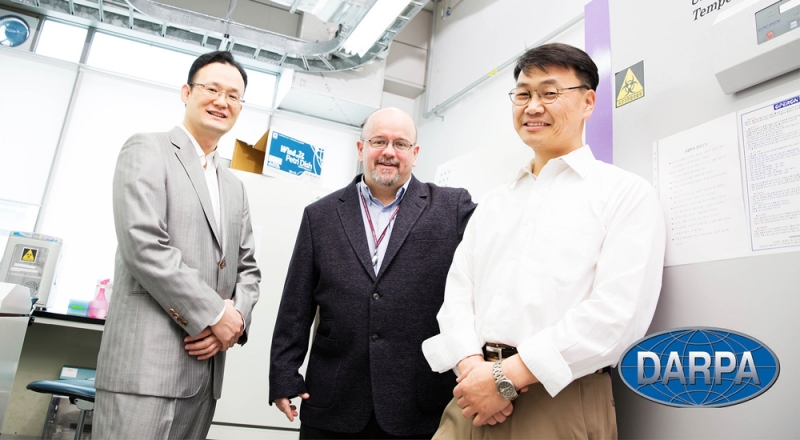 From left are Professor Dougu Nam, Professor Robert J. Mitchell, and Professor Cheol-Min Ghim in the School of Life Sciences at UNIST.

On March 30, a team of UNIST researchers announced that they may have found a way to combat bacteria-associated infections in humans. This study is a collaboration amongest three scientists from the School of Life Sciences, including Professor Robert J. Mitchell, Professor Cheol-Min Ghim, and Professor Dougu Nam.

This study is funded by the Defense Advanced Research Projects Agency (DARPA) through the U.S Army Research Office (ARO) to develop treatment and prevention approaches against bacteria-associated infections in humans. DARPA initially solicited proposals for research supporting the potential use of Bdellovibrio and/or Micavibrio bacterial predators as therapeutics againgst infections caused by Gram-negative antibiotic-resistant and priority threat pathogens. The research team will be receiving about $1.3 million dollars in funding over three years, or an average of $433,330 dollars per year.

“The grant was awarded to study predatory bacteria and their potential use to combat bacteria-associated infections in humans,” says Professor Mitchell who is heading the study.

In previous studies, Professor Mitchell and his students have shown that proteins secreted by B. bacteriovorus reduce Staphylococcus aureus invasion into human cells and predation by Bdellovibrio bacteriovorus rapidly kills the prey bacterium/pathogen. Moreover, his lab also found that prey DNA is significantly degraded during predation, potentially reducing chances for gene transfer and antibiotic resistance to develop. In a related study, they also demonstrated that predatory bacteria, as obligate predators of bacterial, are not harmful to humans cells in vitro, yet are able to pedate on numerous human pathogens, such as E. coli, Yersinia, Acinetobacter, baumannii, Pseudomonas, and Klebsiella, including multidrug resistant superbacteria.

Through a DARPA-funded program, the team will be heading the research to continue studying predatory bacteria. Professor Mitchell’s group will be handling all the experiments with the predatory bacteria, human cell lines, and pathogens, as well as the data collection. Professor Nam’s group will be responsible for the bioinformatics data, including analysis of the transcroptomic data obtained from the experiements. Professor Ghim’s group will use the collected data to generate models that will help explain predation and identify the importance of the different factors involved and their influence.

Professor Mitchell concluded by adding, “It is my hope that through this study and our collaborative efforts, we will advance the use of predatory bacteria to the medial treatment of superbacterial infections and as an alternative to, or in conjunction with, current antibiotic treatments.”