UNIST maintained its leading position in both 2021 THE World University Rankings by Subject and 2021 U.S. News Rankings!

《Editor’s Note: UNIST has gotten world-wide attention once again due to its continued solid performance in the global university rankings. UNIST climbs to 176th in the world, according to the Times Higher Education (THE) World University Rankings 2021, a significant jump from last year’s 201-250 band. And thus, UNIST News Center has compiled a list of those achievements.》

■ 2021 THE World University Rankings by Subject: UNIST Retained Its Position as the World’s 96th Best University!

UNIST retained its position as the world’s 96th best university in the general engineering field, according to the latest Times Higher Education subject rankings. This is the first time that UNIST rose to the list of the global Top 100. This year, only 6 domestic universities have joined the Top 100 list.

The full 2021 THE World University Rankings by Subject can be viewed HERE.

In a new set of 2021 U.S. News & World Report’s Best Global Universities rankings, UNIST has been placed seventh in South Korea and 395th in the world. Moreover, in terms of subject-specific rankings, UNIST excelled in four academic fields, thereby being ranked within the Top 100 globally. 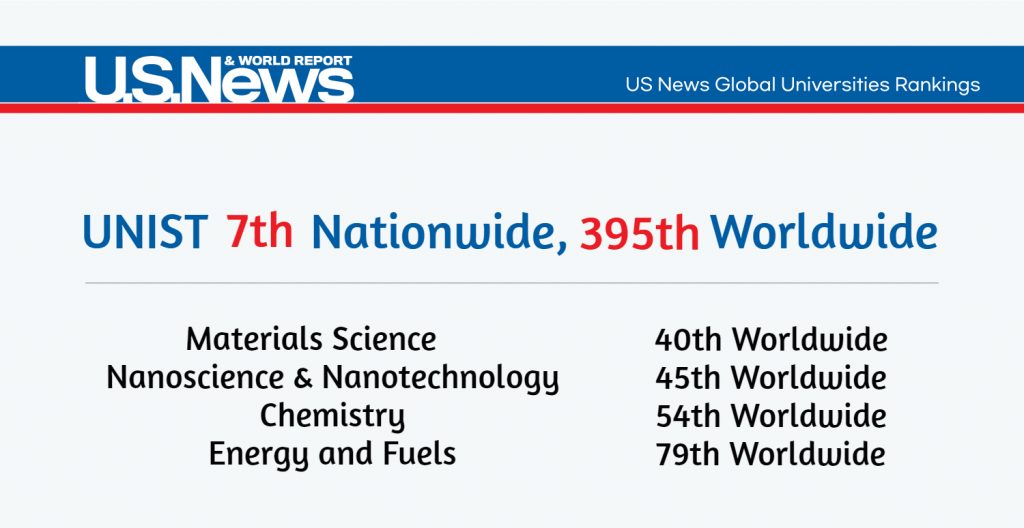 Since 2014, the U.S. News & World Report has been publishing the rankings of global universities in 80 different countries based on school’s academic research and reputation. The new edition evaluates schools in 86 countries. Ten new subject rankings were added this year, for a total of 38. Each subject ranking has its own methodology based on academic research performance in that specific area.