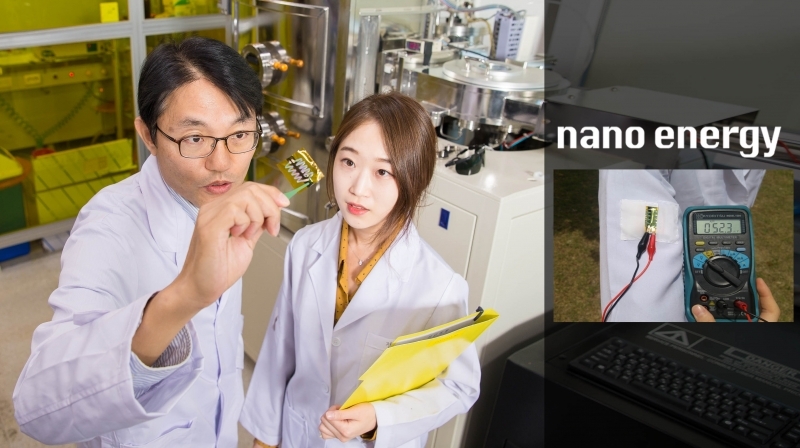 Professor Kyoung Jin Choi (left) and Yeon Soo Jung (right) are examining a wearable TEG. As shown right, the output voltage of the W-STEG attached to clothes was measured to be 52.3 mV.

Their findings, published in the September issue of the prestigious journal Nano Energy,

A recent study, led by Professor Kyoung Jin Choi in the School of Materials Science and Engineering at UNIST has introduced a new advanced energy harvesting system, capable of generating electricity by simply being attached to clothes, windows, and outer walls of a building.

Energy harvesting is a diverse field encompassing many technologies, which involve a process that captures small amounts of energy that would otherwise be lost as heat, light, sound, vibration, or movement. A thermoelectric generator (TEGs) refers to a device that converts waste heat energy, such as solar energy, geothermal energy, and body heat into additional electrical power.

Photograph of the TE ink printed in various shapes with curves and straight lines.

The research team solved this low temperature difference faced by conventional wearable TEGs by introducing a local solar absorber on a PI substrate. The solar absorber is a five-period Ti/MgF2 superlattice, in which the structure and thickness of each layer was designed for optimal absorption of sunlight. This has increased the temperature difference as high as 20.9 °C, which is the highest value of all wearable TEGs reported to date.

“Through this study, we have secured a temperature difference with the ten-fold increase from the conventional wearable solar thermoelectric generators,” says Yeon Soo Jung in the Graduate School of Materials Science and Engineering at UNIST. “Since the output of a TE generator is proportional to the square root of the temperature difference, one can significantly increase the output with the help of this technology.”

In this study, Professor Choi and his team designed a noble wearable solar thermoelectric generator (W-STEG) by integrating flexible BiTe-based TE legs and sub-micron thick solar absorbers on a polymide (PI) substrate. The TE legs were prepared by dispenser printing with an ink consisting of mechanically alloyed BiTe-based powders and an Sb2Te3-based sintering additive dispersed in glycerol. They report that a W-STEG comprising 10 pairs of p-n legs has an open-circuit voltage of 55.15 mV and an output power of 4.44 μW when exposed to sunlight.

“Our new werable STEG is expected to be useful in various applications, such as in self-powered wearable electronic devices,” says Professor Choi. “It will also serve as a catalyst to further improve the future wearable electronic technology market.”

The findings of the research have been published in the August issue of the prestigious journal Nano Energy (IF: 12.34). This work has been supported by the R&D Convergence Program of National Research Council of Science & Technology (NST) of Republic of Korea and the KIST-UNIST partnership program.