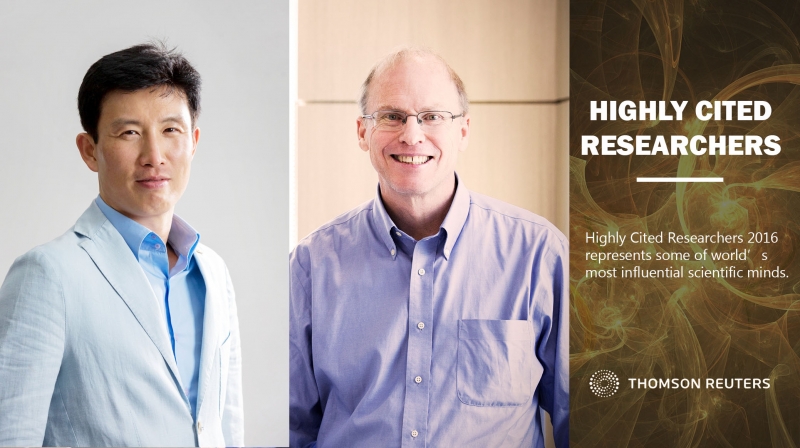 Two UNIST professors have distinguished themselves with inclusion in the 2016 list of Highly Cited Researchers, a yearly distinction released by Clarivate Analytics, formerly the Intellectual Property & Science business of Thomson Reuters. The report revealed that UNIST also recorded the most number of highly cited researchers in the field of materials science among research institutions in South Korea.

The latest Highly Cited Researcher listing by Thomson Reuters recognizes leading researchers in 21 fields of the sciences and social sciences from around the world. The new Thomson-Reuters list evaluated close to 130,000 highly cited papers in science and social sciences journals, indexed in the Web of Science Collection over an 11-year period from January 2004 to December 2014. Highly Cited Papers are defined as those that ranked among the top 1% most cited for their subject field and year of publication, earning them the mark of exceptional impact.

In 2016 edition, about 3,000 researchers who represent some of world’s leading scientific minds earned the distinction. Twenty-eight scientists from South Korea made it on to the list, including Professor Rodney S. Ruoff of Natural Science and Professor Jaephil Cho of Energy and Chemical Engineering. 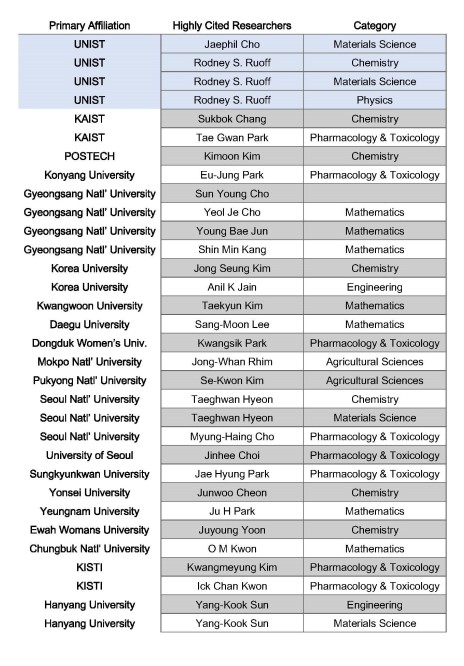 The 2016 List of Highly Cited Researchers by Clarivate Analytics.

Professor Jaephil Cho, the world leading expert on secondary batteries, is the only South Korean researcher to be recognized as one of the world’s top 1% researchers in materials science. Besides, this is the first time he has been included in the list of Highly Cited Researchers.

Professor Rodney S. Ruoff has been recognized by Thomson Reuters as one of the ten most cited researchers worldwide in all three fields of materials science, chemistry, as well as physics. Professor Ruoff made this list for the third time in a row.

“It is precisely this type of peer recognition, in the form of citations given and rooted in the collective and objective opinions of scientific field experts that makes achieving highly cited researcher status meaningful,” said Jessica Turner, global head of government and academia at Clarivate Analytics.

Professor Rodney S. Ruoff, Director of the Center for Multidimensional Carbon Materials (CMCM) at the Institute for Basic Science (IBS) and Distinguished Professor in the School of Natural Science at UNIST has made pioneering discoveries in carbon science for more than 20 years. In addition to being a world-leading pioneer in graphene and other carbon materials, in 2007, he has been ranked as the world’s 16th top materials scientists by Thomson Reuters. Moreover, on July 14th, he has been also selected to receive the SGL Carbon (Skakel) Award for his outstanding and many contributions to the field of carbon materials.

The 2016 Highly Cited Researchers list can be seen in its entirety by visiting HERE.