Ju Mi Park, a combined masters/doctoral student of Life Sciences at UNIST, has been selected to receive the 2017 Asan Foundation Medical Bioscience scholarship in recognition of her excellent academic performance.

The Asan scholarship award has been in continuous operation since the Asan Foundation was established in 1977 and has provided scholarship funds totaling 60 billion KRW to over 29,000 students to date. It is awarded based on the strength of candidates’ academic performance, leadership excellence, and demonstrated passion for their respective field of study. 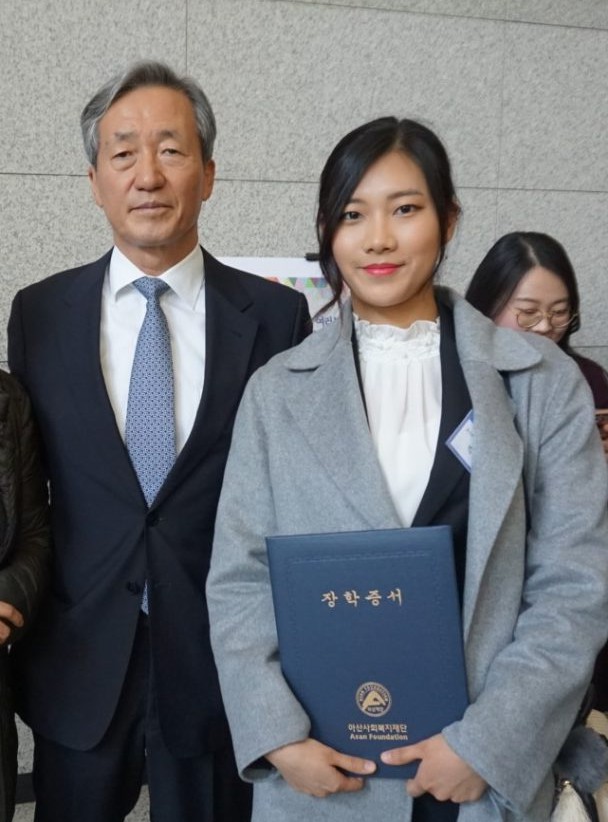 Ju Mi Park (right), a combined masters/doctoral student in Life Sciences at UNIST is with the chairman Mong-Joon Chung (left) of Asan Foundation.

“This scholarship has been given to Ju Mi in recognition of her excellence academic performance and passion for medical bioscience,” says Professor Changwook Lee of Life Sciences. “She even received a four-year scholarship during her time at UNIST and has; therefore, set a great example for her fellow students.”

The award ceremony took place in the auditorium of the Asan Institute for Life Sciences on Thursday, February 23, 2017. At the ceremony, five billion KRW (approx. $4.5 million US) in scholarship funding was awarded by the foundation to a total of 1,476 recipients that included 660 high school students, 569 undergraduate students, 17 graduate students, and 230 children of MIU (Men in Uniform), including military personnel, police officers, firefighters, and coast guard personnel.