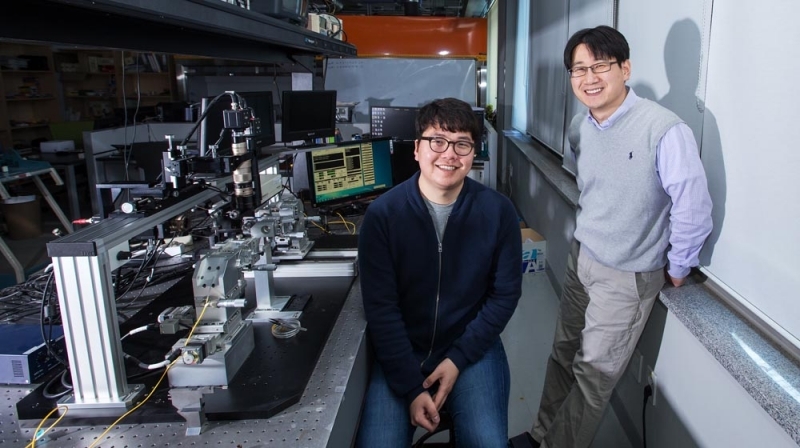 Prof. Min-Suk Kwon (right) and his student, YongHan Kim (left) are standing beside the equipment that can analyze the plasmofluidic disk resonators (PDRs).

Silicon-based photonics, for instance, uses particles of light called photons to carry and process information at very high speeds with extremely low power over a thin optical fiber, rather than using electrical signals over a copper cable.

A team of researchers, led by Prof. Min-suk Kwon (School of Electrical and Computer Engineering) has announced that they have successfully developed a core material to downsize the silicon photonic integrated-circuits. This newly developed material is an ‘optical resonator’ and is capable of trapping specific wavelengths of light. Therefore, it can be applied as modulators, switches, sensors, and filters. They suggest that by switching from silicon photonic resonators to plasmonic resonators, ultimate reduction of the effective mode volume of a resonator can be obtained.

According to Prof. Kwon, photonic components currently used in optical interconnects are relatively large (3~5μm) and not ideally suited to on-chip, high-density integration. Therefore, there has been a strong demand that the footprints of silicon photonic resonators need to be reduced in order to increase the integration density of a silicon photonic integrated-circuit. In this study, Prof. Kwon’s team reduced the radius of the optical resonator by 1μm.

Schematic diagram of the PDR side-coupled to the MISIM waveguide.

According to the team, this silicon-based hybrid plasmonic disk resonators are expected to open the door to ultracompact devices exploiting functional fluids such as liquid crystal. Moreover, because these resonators are compatible with standard CMOS technology and can therefore be easily implemented into existing semiconductor process.