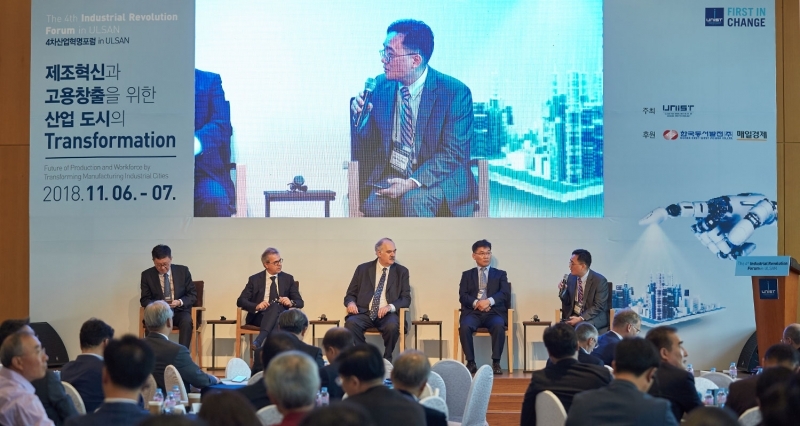 The 2018 4th Industrial Revolution Forum in Ulsan was held in the Kyungdong Hall of Main Administration Building at UNIST from November 6 to 7, 2018.

UNIST to Hold the 4th Industrial Revolution Forum in Ulsan

A heated discussion on the future of industrial cities in the fourth industrial revolution took place in Ulsan, the industrial powerhouse of South Korea.

The 2018 4th Industrial Revolution Forum in Ulsan was held in the Kyungdong Hall of Main Administration Building at UNIST on November 6, 2018

“The rapid advancement of technology holds great promises for our manufacturing industry, yet has great potential to do a great deal of harm,” esponding adequately,” says Director Dong Sub Kim of Institute for the 4th Industrial Revolution. “We urgently need to accurately analyze the present condition and implement a systematic approach for the successful transformation of traditional manufacturing.”

“In this forum, we looked at the decline and resurgence of great industrial cities, such as Pittsburgh, Detroit, and Houston and this has greatly encouraged us to map out a solution for South Korean manufacturing industries,” says Director Dong Sub Kim of Institute for the 4th Industrial Revolution. “This can be a good milestone for the growth and transformation of manufacturing industrial cities in South Korea, including Ulsan.”

Professor Marco Taisch of Politecino di Milano is giving a plenary speech on the topic of “Innovation and Development in the Global Manufacturing Sector – Recommendations for the Future of Manufacturing”.

In the forum, the case studies of Germany and Switzerland, in which manufacturing innovation leads to job creation were also discussed. Starting with the steel city Pittsburgh, which contributed significantly to the growth of nation’s medical and computer industries through cooperation with universities, the forum also looked into Detroit’s success in fostering 3D printing, biomanufacturing, bioinformatics, nanotechnology, and industrial robotics industry based on the ‘Plan for Revitalize American Manufacturing‘.

Panel discussion was also held during the course of the event. Participants had a heated discussion on the future of industrial cities.

During the session on transformation for future of workforce, the forum identified the emergence of entire categories of new, uniquely human jobs, created via human-machine communication and put a special emphasis on the implementation of work-study parallel system. It also suggested to reevaluate the university education in accordance with the changing nature of jobs.

Executive Dean Fawwaz Habbal of Harvard SEAS gave a closing session on the topic “Role of Academia Transforming Industrial Cities” and once again emphasized the role of academia for the smartization of industrial cities.

Meanwhile, the forum has been attended by 250 guests, which also includes about 50 international participants from 10 countries. Attendes of the forum also had a chance to participate in the tour of the major manufacturing industries in Ulsan and Pohang. 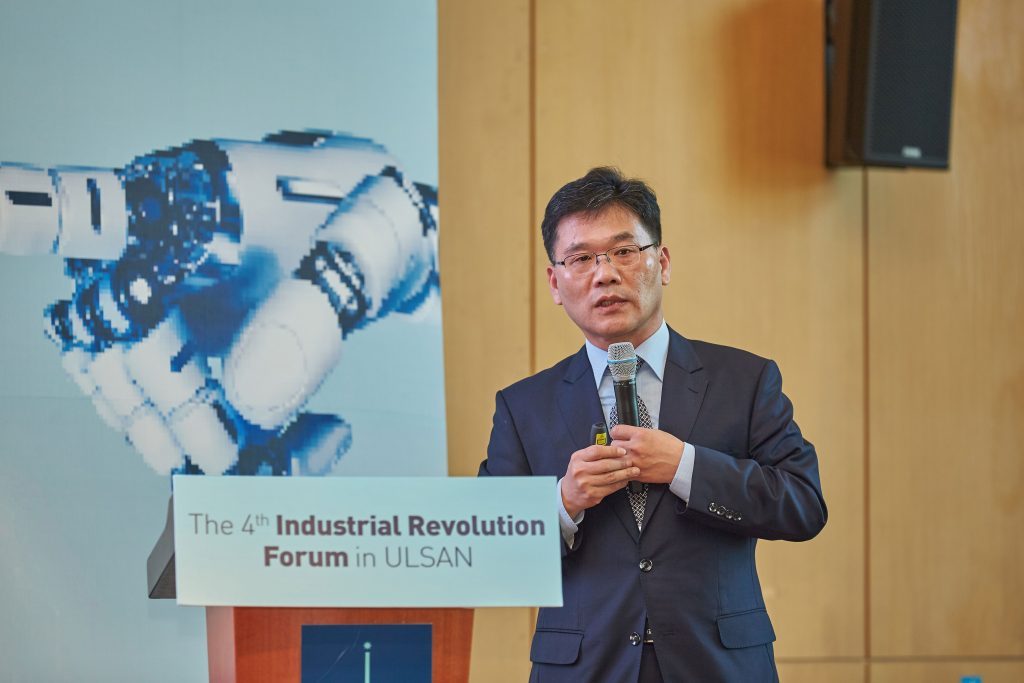 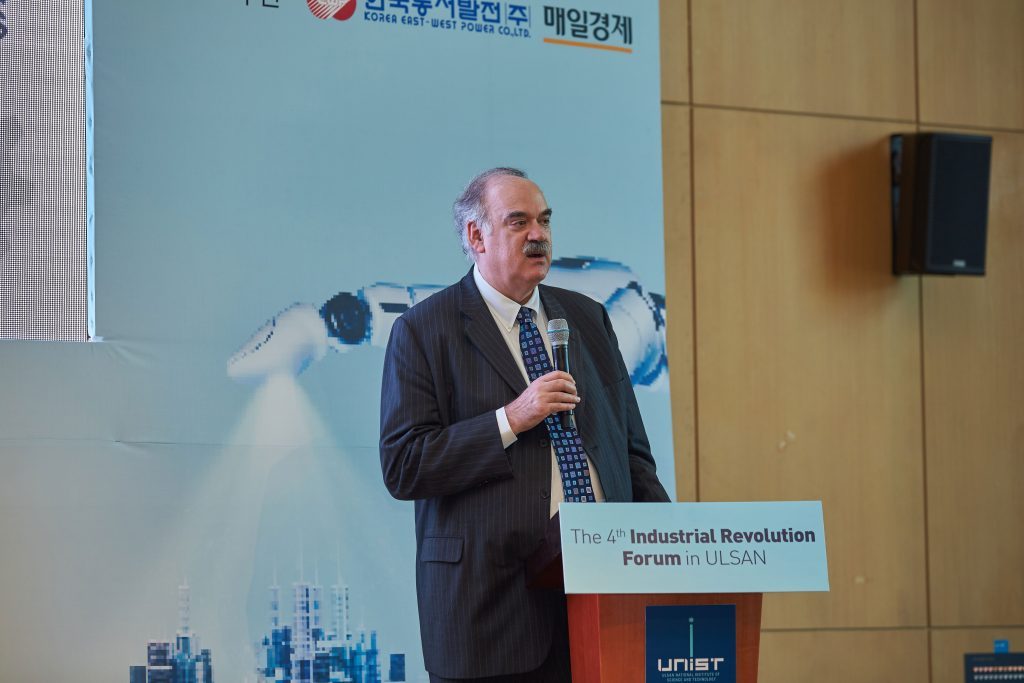 General Secretary Richard Mark Soley of IIC (Chairman & CEO, Object Management Group) is giving a plenary speech on the topic of “Learning Through Testbeds at the Industrial Internet Consortium (IIC)”. 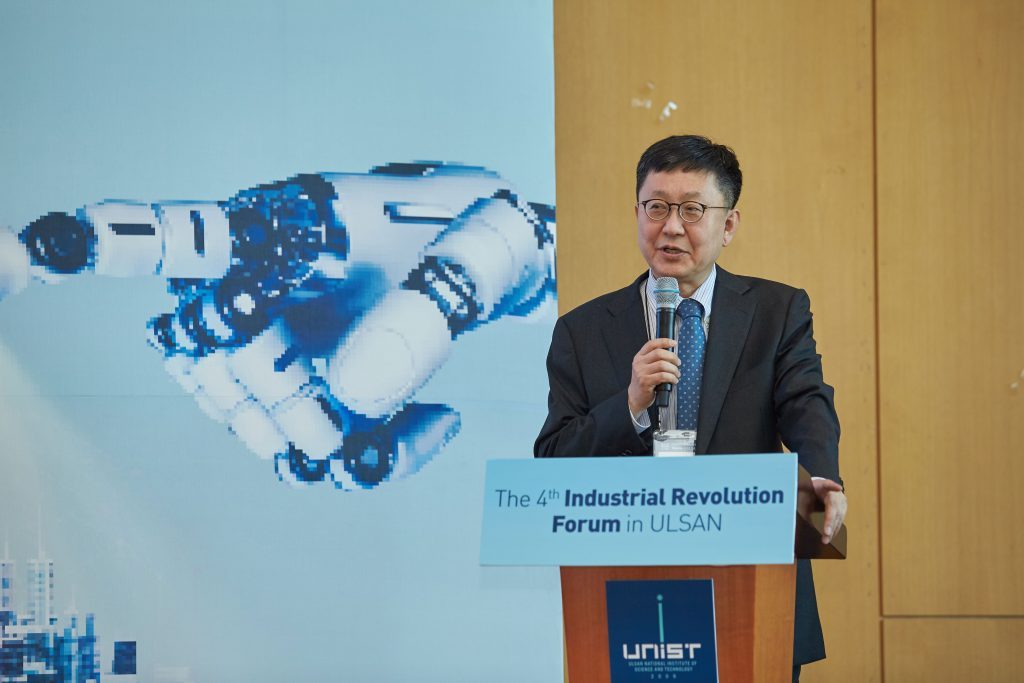