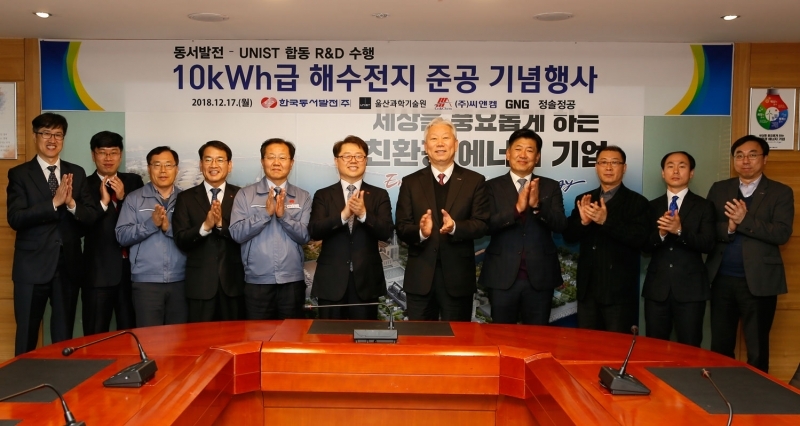 Beyond its contributions to the revitalization of the new energy, seawater batteries rebuilt itself as a new ‘eco-friendly’ and ‘low-cost’ energy storage system (ESS).

UNIST and Korea East-West Power Corporation held a ceremony to celebrate the completion of ’10kWh Seawater Battery ESS Facility’ at Ulsan Thermal Power Plant on December 17, 2018. Participants at the ceremony also had an opportunity to take a look at the detailed installation progress of seawater battery-based ESS, in addition to exploring prototypes and the demonstration pilot plant.

The new seawater-based ESS has a capacity of 10kWh, which is equal to the amount of electricity that a family of four can use for a day. As part of this installation, Korea East-West Power Corporation has built a facility that can light the office spaces of Ulsan Thermal Power Plant, using seawater batteries. There was also time to verify consistent output of the installed equipment through charging/discharging tests of seawater batteries. 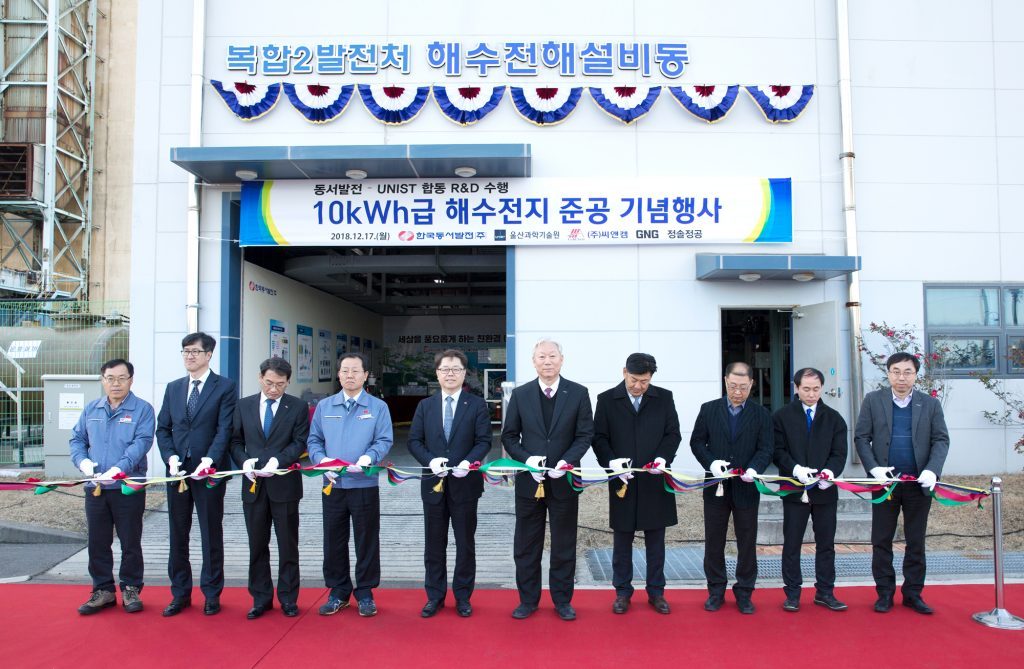 Energy storage system (ESS) have emerged as a promising, versatile technology that captures energy produced at one time for use at a later time. With the massive growth of IoT in manufacturing and industries, there has been booming demand driven by batteries for various electronic devices, as well as an explosion in the relevant market. At present, the size of the domestic ESS market to about 4 trillion KRW.

Currently, most ESS systems are powered by lithium-based batteries. However, the continued growth in demand for lithium-ion batteries has contributed to rising battery prices, which can lead to lithium-ion depletion.

In an effort to develop an alternative energy storage system, Professor Youngsik Kim and his research team in the School of Energy and Chemical Engineering at UNIST has introduced an eco-friendly, low-cost seawater batteries. Their seawater battery can store and utilize electricity, using sodium(Na), the sixth-most abundant element on earth.

Knowing the potential of seawater batteries, Korea East-West Power Corporation has invested about 2 billion KRW in research funding since 2016. The final product, installed at Ulsan Thermal Power Plant is a result of such investment. Without the support of Korea East-West Power Corporation, both the development of seawater batteries and the installation of EES would not have been possible.

“Seawater battery is an important technology that will change the paradigm of energy storage,” says President Mooyoung Jung of UNIST. “Without the ongoing support of Korea East-West Power Corporation, this would not have been possible.”

“Being located along the shoreline, Ulsan Thermal Power Plant has optimum conditions for the implementation of seawater batteries in ESS,” says a representative of Korea East-West Power Corporation. “This will be an important achievement for the future commercialization of world’s first seawater batteries.”