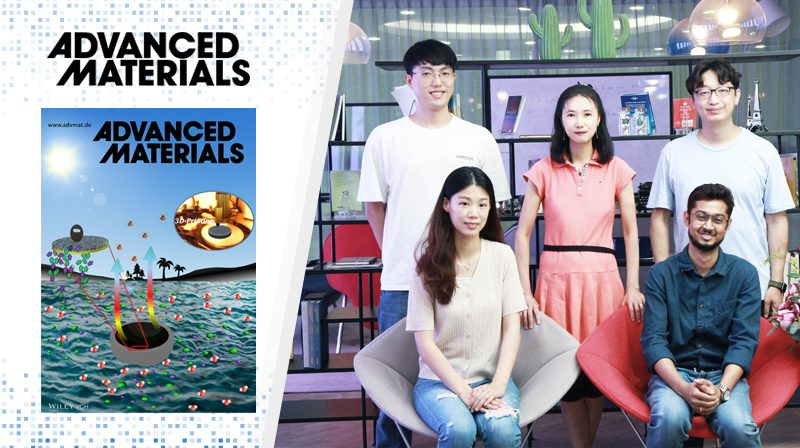 The findings of this research were made available in August 2021, ahead of its publication in Advanced Materials.

A team of researchers, affiliated with UNIST has recently unveiled an innovative, low-cost seawater desalination devices that transforms salt water into drinking water via solar energy. According to the research team, the new device captures the sun’s energy far more effectively than ever before, thereby improving fresh water conversion, as well as device performance and durability. Importantly, the device is inexpensive and it is also easy to construct via 3D printing methods. As a result, the new technology can help provide clean and safe drinking water to people in developing nations, noted the research team.

This breakthrough has been led by Professor Ji-Hyun Jang in the School of Energy and Chemical Engineering at UNIST. In this study, the research team has reported a 3D-printed solar evaporator that can efficiently utilize solar energy (99%) with an evaporation rate of 1.60 kg m–2 h–1 and efficiency of 89% under 1 sun irradiation. Solar-driven water evaporation uses sunlight as the sole energy source to vaporize water. The system derives fresh water from seawater through solar evaporation. In this process, the seawater is heated until it reaches the evaporation state. The salt, however, is left behind, while the vapor is condensed to produce fresh water.

However, the solar-to-vapour efficiency has been limited due to the lack of a proper design for the evaporator to deal with either a large amount of heat loss or salt accumulation, noted the research team.

The research team addressed these issues via two cost-effective approaches: (1) A rational design of a concave shaped supporter by 3D-printing that can promote the light harvesting capacity via multiple reflections on the surface, 2) The use of a double layered photoabsorber composed of a hydrophilic bottom layer of a polydopamine (PDA) coated glass fiber (GF/C) and a hydrophobic upper layer of a carbonized poly(vinyl alcohol)/polyvinylpyrrolidone (PVA/PVP) hydrogel on the supporter, which provides competitive benefit for preventing deposition of salt while quickly pumping the water. “We envision that this design of the solar evaporator can help in providing fresh water in a robust and cost-effective manner while maintaining stable performance over a long period,” said Professor Jang.

The findings of this research were made available in August 2021, ahead of its publication in Advanced Materials. This study has also been featured as a frontispiece in Advanced Materials on September 23, 2021. It has been supported through the mid-career researcher program by the National Research Foundation of Korea (NRF).