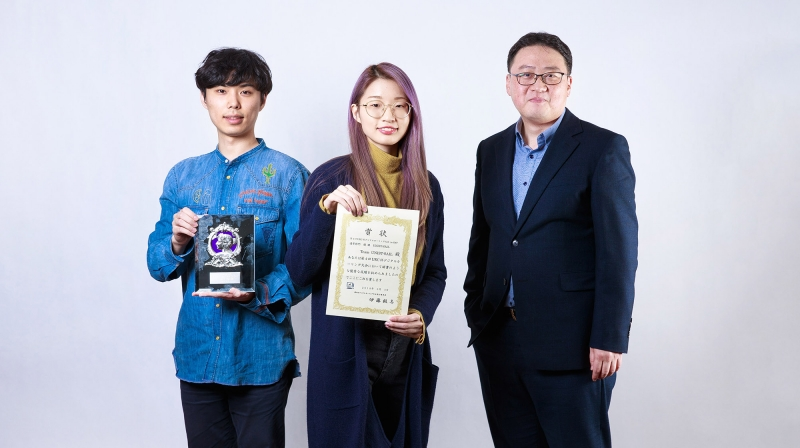 From left are Kyowoon Lee, Sol-A kim, and Professor Jaesik Choi in the School of Electrical and Computer Engineering at UNIST.

Professor Jaesik Choi in the School of Electrical and Computer Engineering at UNIST has announced that his research team has distinguished themselves on an international level in the recent digital curling competition, which took place in Japan on Monday, March 5.

The digital curling competition is an AI-based sports game in which game-playing AI software programs plays a curling match in a virtual environment. This is held annually in March, as part of the “Game AI [email protected] (GAT)”.

Deep learning that efficiently combined the policy and value networks.

Six teams in total participated this year, including Professor Choi’s Statistical Artificial Intelligence Lab (SAIL) at UNIST. In the competition against five Japanese teams, the digital curling software, which was designed and developed by Kyowoon Lee, Sol-A kim, and Professor Choi, set out to dominate the competition. Professor Choi’s team moved into a first-place tie with a record of 7 wins and 3 losses, but won their two playoff games to reach in first place.

“The final three AI software programs in playoff games were famous for their highest winning rates,” says Sol-A Kim in the Graduate School of Electrical and Computer Engineering at UNIST. “South Korea is a relatively latecomer in the field of AI, but through this competition we have proven that our technology has reached the global level.”

Curling has been described as chess on ice. It is a sport game that requires great strategy, tactics of game management, and skill. It shares some characteristics of go, as it requires the optimal strategy to maximize expected probability of winning. However, because there are an infinite number of variables to consider in curling, it is not always easy to formulate strategy.

The team applied the ‘Kernel Regression’ and the ‘Reinforcement Learning-based Deep Learning Technique’ to their AI curling program to help the software to form self-winning strategies of its own. They also combined the policy network that predicts the best vantage point of the game and the value network that predicts the win percentage of the current in order to maximize the learning speed and performance. .

Established by the University of Electro-Communications (UEC) in Japan, the first digital curling competition was held in March 2015 and this year marks the fourth anniversary of this event. The virtual curling stadium where the AI programs compete against each other uses a curling simulation, developed by UEC.

This simulator provides a real world gaming platform, which allows the environment variables that may occur in a real curling game. This has become an official event of the newly-established GAT since 2016. Other AI-based curling competitions include the IEEE-CIG 2015 Mini Competition and the Game Playing Workshop (GPW).

From left are Kyowoon Lee and Sol-A kim in the Graduate School of Electrical and Computer Engineering at UNIST.

Meanwhile, Professor Choi’s team also partook in the Game Playing Workshop (GPW), which took place on November 10, 2017. In the competition, two of their AI curling programs competed against other teams and won the race.