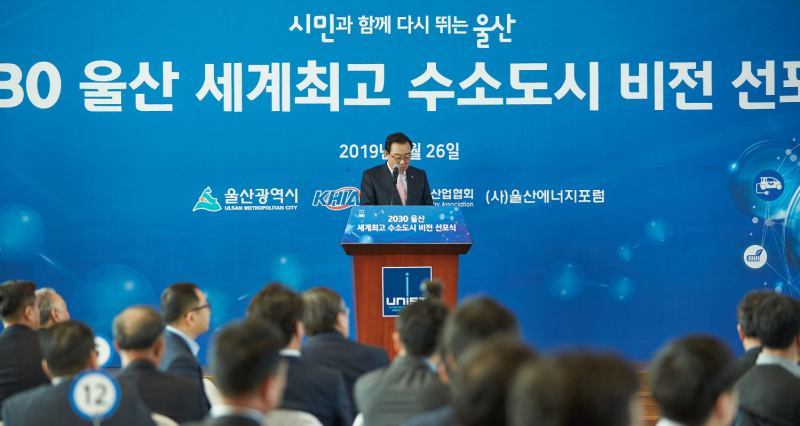 The vision proclamation ceremony of '2030 Ulsan World's Leading Hydrogen City' was held at UNIST on February 26, 2019.

The ceremony was held in Kyungdong Hall of Main Administration Building of UNIST on February 26, 2019.

Ulsan Metropolitan City, which is on the verge of a new leap forward as a global leader in the emerging hydrogen production industry, held its 2030 vision and strategy proclamation ceremony at UNIST.

At the ceremony, UNIST showcased some of its leading-edge hydrogen technologies, thus posed promises to be of a great help towards Ulsan’s leap towards becoming world’s leading hydrogen city.

The ceremony took place in the 4F Kyungdong Hall of Main Administration Builidng at UNIST on February 26, 2019. In conjunction with the vision proclamation ceremony of ‘2030 Ulsan World’s Leading Hydrogen City’, the event consisted of a joint declaration on the promotion of hydrogen industry by the local hydrogen companies, as well as related seminars. 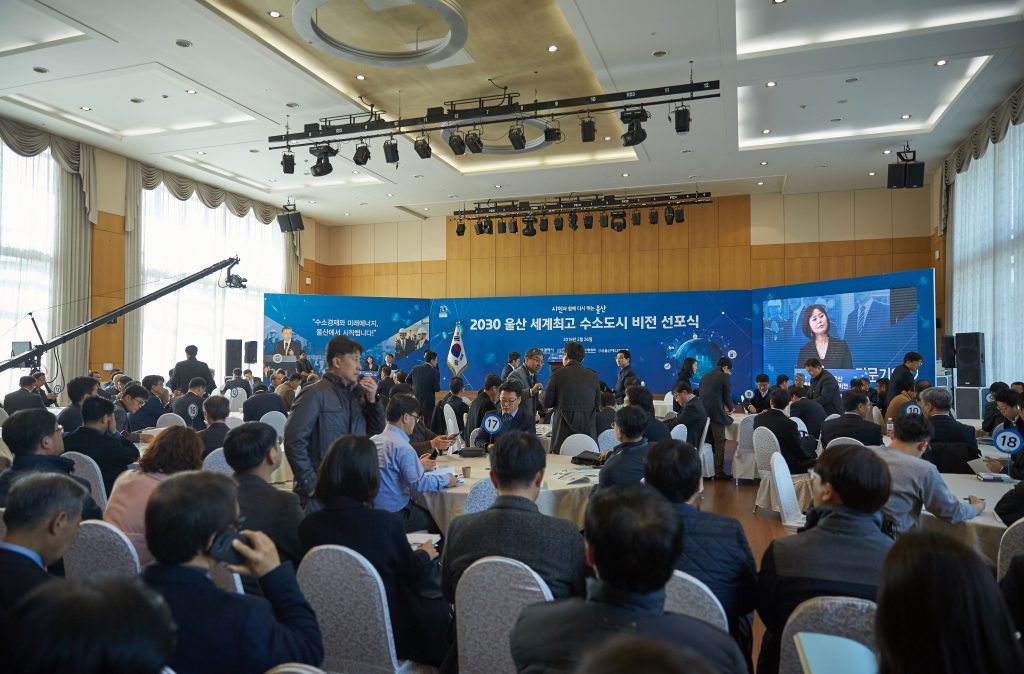 More than 250 guests from the government, business communities, and other related organizations joined the event on February 26, 2019.

During the course of the event, research works by Professor Jong-Beom Baek and Professor Guntae Kim in the School of Energy and Chemical Engineering at UNIST were also exhibited. These were the technologies for the mass production of hydrogen, which will be the basis of the emerging hydrogen industry.

Professor Jong-Beom Baek and his research team at UNIST are working on the development of catalysts that decompose water to generate hydrogen. At the ceremony, Professor Baek showcased a device that produces hydrogen, using a special water-splitting catalyst. He also demonstrated the hydrogen production, using the coated electrodes immersed in water and providing them with electricity. Also notable is the fact that hydrogen is produced efficiently at low voltages. 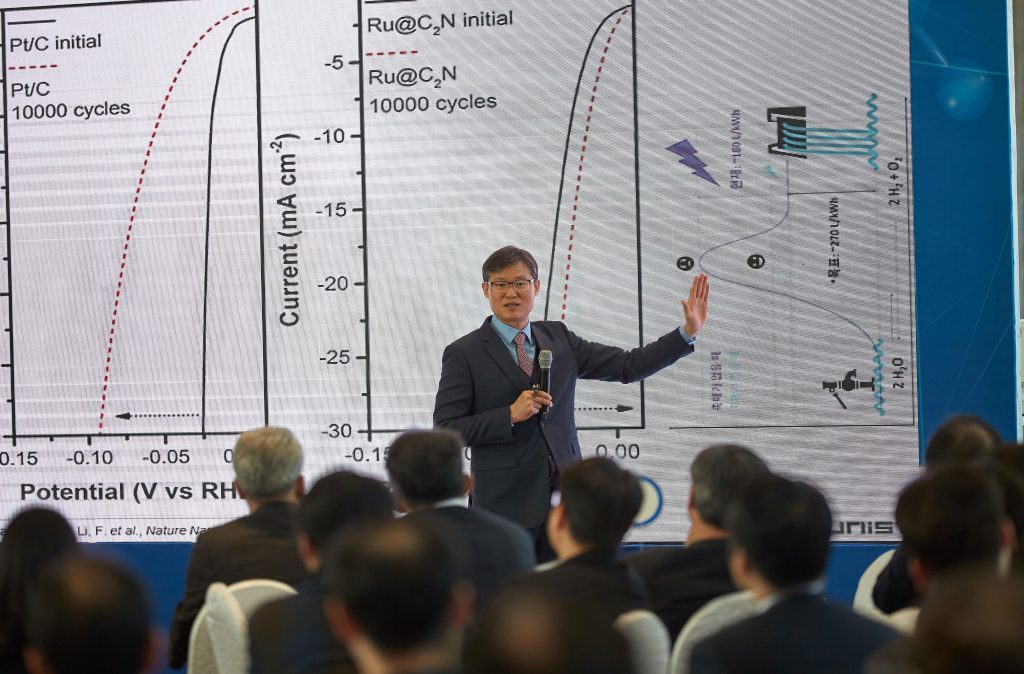 Professor Jong-Beom Baek (School of Energy and Chemical Engineering, UNIST) is presenting his research works at the ceremony.

‘Electrolysis of Water’ is well known as a way to generate hydrogen without using fossil fuels. However, high voltage is required to break down the water. In order to produce hydrogen efficiently, a catalyst that lowers the overvoltage is needed. Until recently, platinum (Pt) was mainly used for this catalyst. However, catalysts are being developed to replace these catalysts because of their high cost and low stability. ‘[email protected]’, developed by Professor Baek’s team, is produced by combining ruthenium, a low-cost metal, with a two-dimensional organic structure, and is attracting attention as a catalyst having high efficiency and economy.

Professor Guntae Kim in the School of Energy and Chemical Engineering at UNIST has introduced a system that can produce hydrogen and electric energy using carbon dioxide. The hybrid metal-carbon dioxide system, which was exhibited on the day, is a technology attracting attention as a new carbon dioxide utilization and storage technology. In this system, carbon dioxide is dissolved in water to make electricity and hydrogen using materials with higher reactivity. It is a technology that is expected to find various applications because it can reduce greenhouse gas and can produce hydrogen and electricity. In fact, domestic companies are inquiring about ways to utilize this technology. 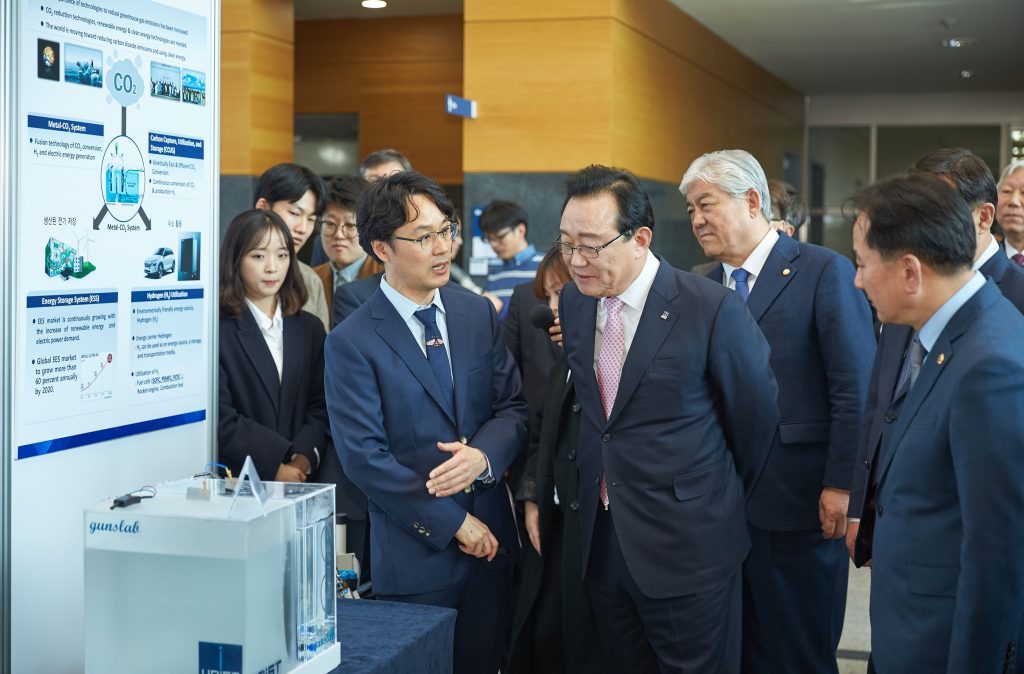 As the climate change has emerged as the major threat of 21st century, researches on the utilization and storage of carbon dioxide are being actively carried out. Particularly, as the problem of disposal of carbon dioxide emitted from industry is emerging, interest in collection and utilization is hot. Professor Kim’s technology is more promising because it is a technology that can produce high-value-added products by utilizing carbon dioxide that has been abandoned uselessly.

Meanwhile, the ceremony has been attended by Mayor Song Chul Ho of Ulsan Metropolitan City, local members of the National Assembly of S. Korea, as well as the leaders of energy-related public sector organizations. About 250 guests from research institutions and 110 hydrogen companies nationwide participated in the ceremony, thus promised their efforts to support future industrial development. 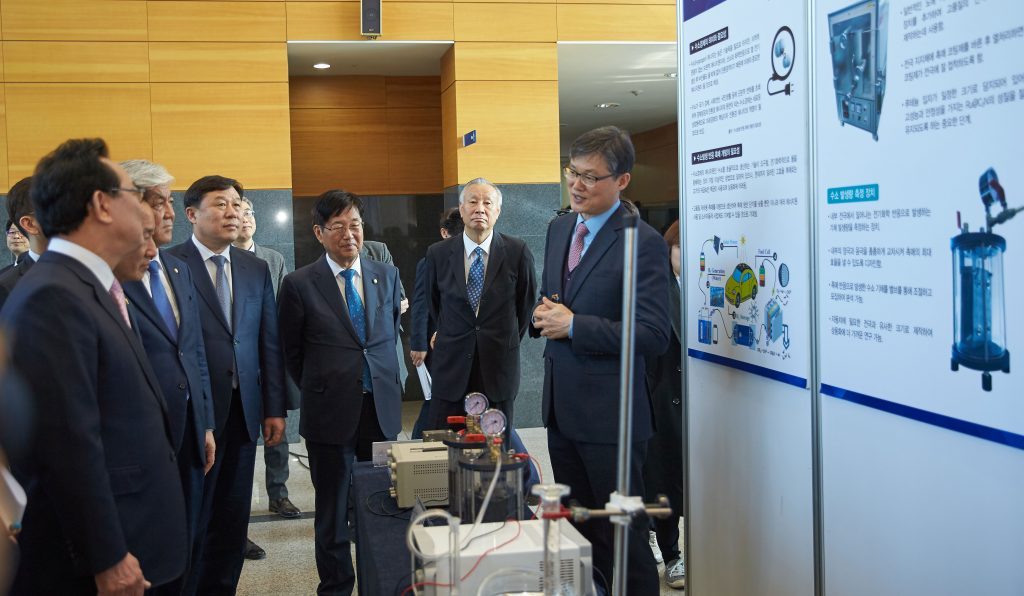 Professor Jong-Beom Baek (School of Energy and Chemical Engineering, UNIST) is introducing his catalyst technology for hydrogen production at the ceremony.