Their findings have been published in the August 2021 issue of ACS ES&T Water.

Seawater batteries are eco-friendly electric energy storage systems (ESS) that use natural seawater to produce and store electricity. Besides, when compared to the current lithium-ion batteries (LIBs), it is much less expensive, more environmentally friendly, and less prone to fire risks.

A research team, led by Professor Youngsik Kim in the School of Energy and Chemical Engineering at UNIST has introduced a new battery system that disinfects and dechlorinates water during charging and discharging, respectively. The new system is a combination of two disinfection and dechlorination processes, in which saved energy is consumed to partly operate the system.

Published in the August 2021 issue of ACS ES&T Water, the research team anticipates that the application of these findings will contribute to development of a new type of battery system that can be used to disinfect water and neutralize the remaining disinfection agents, while generating electricity.

Figure 1. (c) A disinfection-dechlorination (DD) battery, which disinfects and dechlorinates the water during charge and discharge, respectively.

In this study, the research team introduced a disinfection-dechlorination battery (DD-battery), consisting of an anode for energy storage through Na+ reduction to metal Na and a cathode for disinfection via Cl– oxidation to free chlorine species, using a Na-selective membrane for separating anode and cathode.

Indeed, during the charging process, the proposed system stored energy by converting the Na ions of the catholyte (salted water) to Na metal on the anode and disinfecting the contaminated water by producing disinfection agents (e.g., Cl2, HOCl, and OCl) on the cathode. According to the research team, the stored energy in the anode is released during discharge, and the system can dechlorinate the remaining free chlorine to prevent disinfectant toxicity.

This self-disinfection-dechlorination during battery cycling can be combined with renewable energy sources for efficient water disinfection in remote regions. The residual chlorine after disinfection can be neutralized during discharge, during which the system releases stored energy, noted the research team. 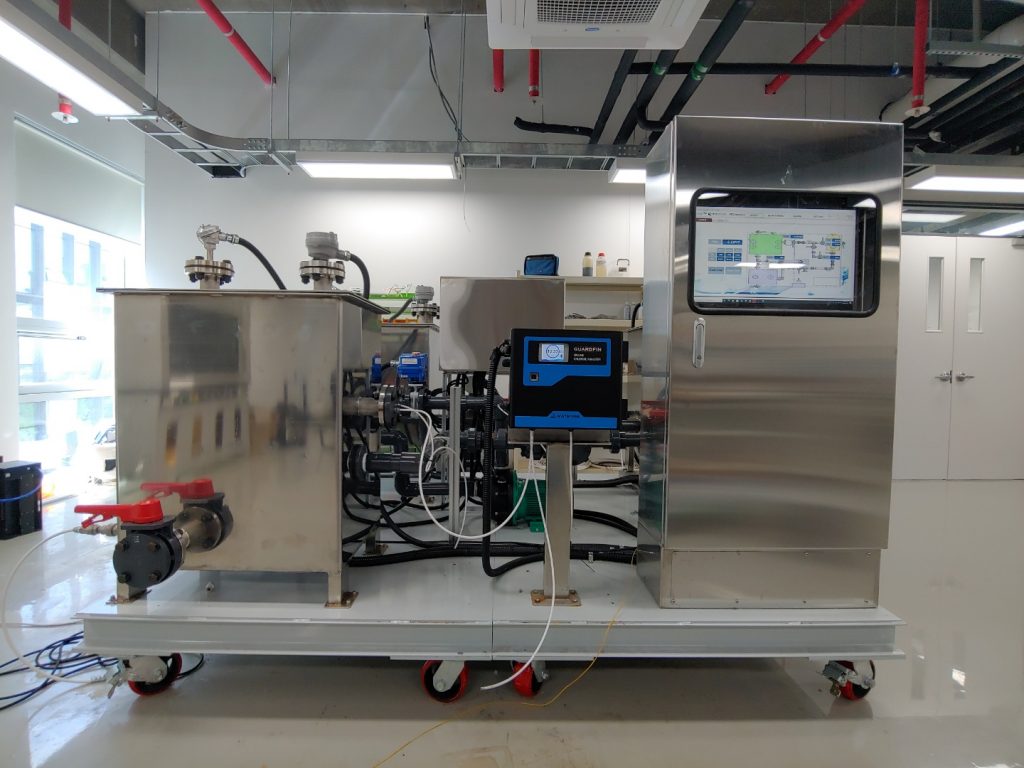 Professor Kim’s research team, in collaboration with a local company in Ulsan, has been actively involved in new product development. A local machinery company, called DongSung Industrial Machinery Co. Ltd., has succeeded in developing a seawater battery-based hybrid sterilization and neutralization system via the regional revitalization project, hosted by UNIST and the Korea Institute of Ocean Science and Technology (KIOST).

The new device, including its water tank, is 1.5 meters high, 2 meters wide, and 2 meters deep. It can sterilize and neutralize 200 liters of seawater within three hours. This is possible while charging and using three 2.5-watt seawater batteries. Besides, the total residual oxidant (TRO) density of the seawater discharged through this process is lower than 0.5 parts per million (ppm), a ballast water discharge standard for ships. This system can also monitor the state of sterilizing and neutralizing the seawater on a real-time basis.

DongSung Industrial Machinery Co. Ltd. has moved into UNIST Seawater Resources Technology Research Center with the purpose of conducting joint research and development. It has recently succeeded in creating a physical prototype and spurring new product development for sale. The seawater batteries for the assessment of maritime equipment had been produced and supplied by 4 to One Co., Ltd. via pilot production, run by the regional revitalization project.

Meanwhile, the regional revitalization project has been promoted by the Ministry of Trade, Industry and Energy (MOTIE) to assist the region’s manufacturers and the transformation of new industries. UNIST, along with KIOST, has been promoting cooperation with local industries with the aim of promoting the development of the eco-friendly energy-based marine equipment industry by utilizing marine specialized battery technology.