A research team, led by Distinguished Professor Rodney S. Ruoff (School of Natural Science) from the IBS CMCM at UNIST succeeded in synthesizing a new 2D Metal Organic Framework with an ever-growing list of possible applications.

Their findings have been published in the online version of Chemistry of Materials on October 17, 2019.

An international team of researchers, affiliated with UNIST, has announced that they have succeeded in synthesizing a new 2D Metal Organic Framework with an ever-growing list of possible applications. This breakthrough has been led by Distinguished Professor Rodney S. Ruoff (School of Natural Science), who also serves as a director of the Center for Multidimensional Carbon Materials (CMCM), within the Institute for Basic Science (IBS) at UNIST.

Chemical vapor deposition (CVD) growth of graphene on metal substrates, especially on copper (Cu) foils, is an effective and popular technique to synthesize graphene approaching perfect crystallinity. Covalent chemical functionalization of defect-free (and thus the most chemically inert) graphene on Cu with deliberately chosen appending groups is not only fundamentally important for understanding its chemistry, but also for tailoring its structures and properties, and could be beneficial in practical uses such as for electrochemical sensors, optical devices, non-corroding current collectors, and as electrodes in electrical energy storage systems, among other reasons. The chemical reactivity of graphene on Cu foil substrates is a currently a topic of fundamental scientific study.

To elucidate the reaction behaviors of graphene on Cu, Professor Ruoff, along with Dr. Xu Zhang and coauthors, employed their newly-developed single-crystal graphenes on large-area Cu(111) and Cu(100) foils, as well as polycrystalline graphene grown on commercial polycrystalline Cu, to study some particular chemical reactions including a newly-developed reductive functionalization of graphene originally proposed by coauthor Professor Christopher W. Bielawski. 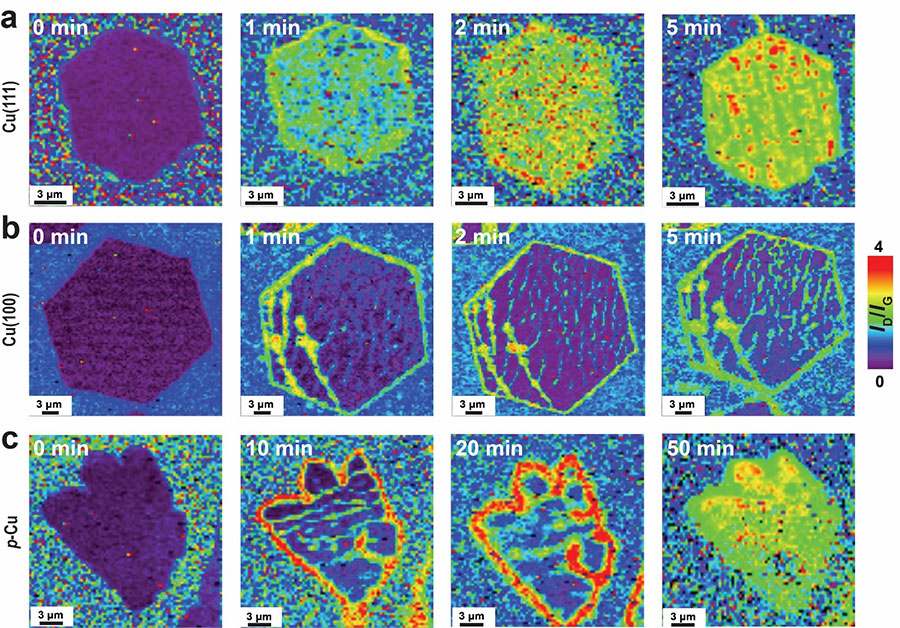 They found that the reaction occurs much more readily on single-crystal graphene on Cu(111) such that uniform functionalization of single-crystal graphene islands, and separately of completely grown continuous single-crystal graphene films, could be obtained. The extent of reaction is even higher than for graphene transferred onto silicon wafers having an oxide layer, a well-studied platform with relatively high reactivities. In contrast, graphene islands and continuous films grown on Cu(100) and polycrystalline Cu foils reacted to a much smaller extent. It was learned in the study that the size of the graphene islands on the Cu(111) has no influence on the functionalization, as further demonstrated by the similar efficiency of functionalization for continuous single-layer graphene films on Cu(111); this strongly implies that the reaction selectively takes place on the topside of graphene.

Based on a series of Raman spectroscopy studies along with other experimental techniques and theoretical calculations, the noticeable strong difference of graphene’s reactivity on Cu substrates of different surface crystal orientations is because the graphene is under compressive strain that is significantly larger (its biaxial strain is about 0.3%) on Cu(111) owing to lattice-induced friction between the epitaxial graphene and Cu(111). Such a friction, previously presented by collaborator Prof. Feng Ding, leader of the IBS CMCM Theory Group, is much smaller for graphene on other surface-oriented Cu foils, in which compressive strain is largely released (it is less than < 0.1%) by local deadhesion (the friction is too small!) and thus “graphene wrinkles” are formed. 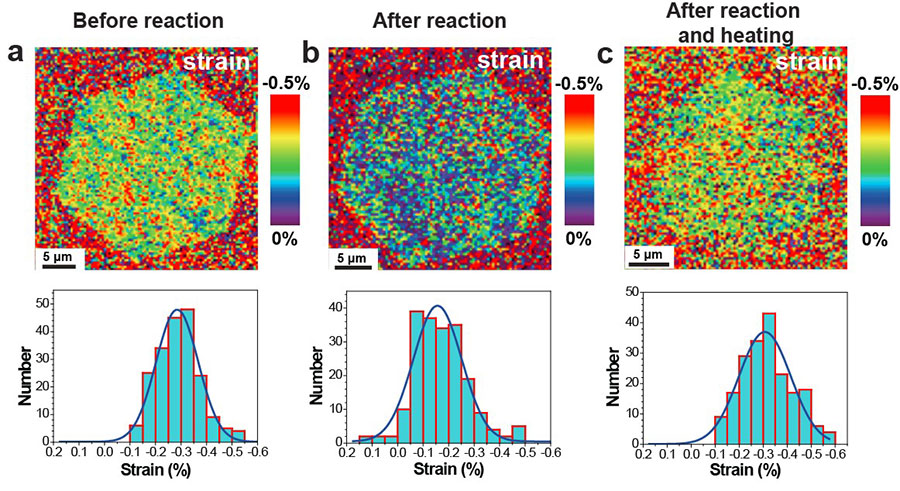 It was learned that the compressive strain present in the single-crystal graphene on the Cu(111) foil substrate could be changed by chemical reactions with the surface. Covalent functionalization was found to “relax” this compressive strain, and then when the functional groups were eliminated from the graphene by heating, the compressive strain was largely recovered. Since strain determines diverse physical properties of materials, this unique approach to “strain engineering” may be useful for particular types of graphene-based devices. 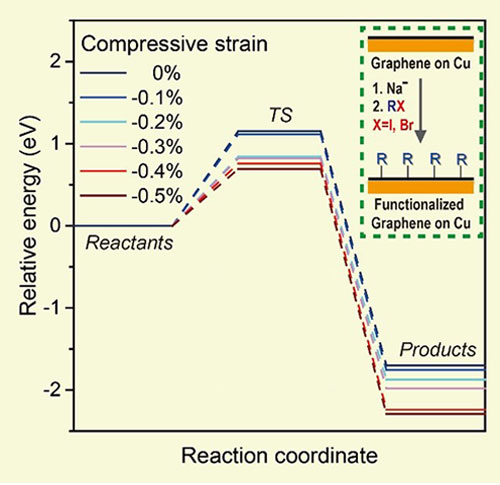 ▲ Figure 3. The influence of compressive strain, which is alterable by the surface orientation of Cu, on the reactivity of graphene on Cu in a reductive functionalization. Note that the minus sign “-” means compression (“+” for tension).

“For some applications, large-area single-crystal graphene, which can now be readily grown on our large-area Cu(111) foils, is likely superior to polycrystalline graphene grown on polycrystalline Cu foils,” says Distinguished Professor Ruoff. “Our findings about the effect of Cu surface orientation on the covalent chemistry of graphene sheds light on the fundamental chemistry of single-crystal graphene and the role that compressive strain can play in some reactions, which could find many applications; one reason that this might be immediately useful, is that the continuous single-crystal graphene films are “automatically” under compressive strain when removed from the CVD growth chamber—and that compressive stress at the interface between the single crystal copper surface and the single crystal graphene—provides a chemical driving force for reacting the top surface—the exposed surface—of the graphene.”

This research has been supported by the Institute for Basic Science (IBS) and has been published in the online version of Chemistry of Materials on October 17, 2019.