Appeared in the recent edition of NPG Asia Materials

Silicon nanosheets (SiNSs) are one of most exciting recent discoveries. Owing to their unbeatable electro-optical properties and compatibility with existing silicon technology, SiNSs have been the most promising candidate for use in various applications, such as in the process of manufacturing semiconductors and producing hydrogen.

A joint research team, led by Prof. Jae Sung Lee and Prof. Soojin Park of Energy and Chemical Engineering at UNIST, has developed a a cost-effective and scalable technique for synthesizing SiNSs, using natural clay and salt. Through this research, UNIST has taken a major step towards mass production of this ground-breaking material with relatively low cost.

In their study, published in the current edition of NPG Asia Materials, the research team reported an all-in-one strategy for the synthesis of high-purity SiNSs through the high-temperature molten salt (for example, NaCl)-induced exfoliation and simultaneous chemical reduction of natural clays.

According to the team, these newly synthesized Si nanosheets are key components in the production of ever smaller electronic devices due to their ultrathin (thickness of ~5 nm) body. Prof. Park states, “As the electrical and electronic devices are getting smaller and smaller, there is a great demand for manufacturing their individual componants to be nanoscale.” He continues, “Our new technique uses inexpensive natural clays and salt for preparing high-quality nanosheets, thereby cutting down production costs greatly.” 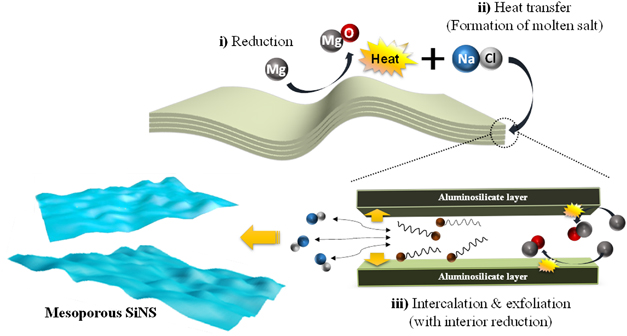 Schematic illustration showing the synthetic process for the preparation of SiNSs.

As shown in the figure above, in the synthetic process for the preparation of SiNSs, natural clay is exfolicated with molten NaCl. The exfoliated clay is, then, transformed into SiNSs by using Mg reductant. Here, Molten salts can be exchanged with intercalated alkylamines and metal cations inside clays. Then, Mg can reduce the interior of the clay minerals, generating additional heat to induce final exfoliation.

“Through the simultaneous molten-salt-induced exfoliation and chemical reduction of natural clay, both the salt and clay start to melt at a reaction temperature, ranging from 550°C to 700°C. The molten salt is, then, dissolved in the clay layers and disintegrated into individual nanosheets,” said Mr. Jaegeon Ryu, a doctoral researcher in Prof. Soojin Park’s lab and the first author of the study. He continues, “Using the metallothermic reduction, metallic oxides inside clays can be exchanged with silicon.”

The team reports that these nanosheets have a high surface area and contain mesoporous structures derived from the oxygen vacancies in the clay. They add, “These advantages make the nanosheets a highly suitable photocatalyst with an exceptionally high activity for the generation of hydrogen from a water–methanol mixture.”